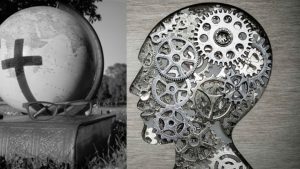 I can unequivocally attest to the reality and fact that Mental Health Is A Morality Issue. Now, with being on a Mental Health and Recovery Services Board for over a year and listening to agencies describe their programs for ‘those in need’; I have to say that over 80% of what I hear as Mental Health Issues is in reality – Morality nonexistent in schools, homes and community.

The litany of humanistic solutions is in reality going to continue the degeneration of our American Foundational Heritage. That litany sings as the Marx, Trotsky, Hobbs, Freud, Rauch, Hall, Wunt, Pavlov, and Jung choir. All of this virtually unanswered by Reformation Biblical solutions.

The only major ‘church’ organization involved in Mental Health is Catholic Charities and I would not say they use a Reformation Biblical Model.

If you have not been following the posts at samueladamsreturns.net regarding the Chaplains and Clergy of the Revolution or you have not downloaded the pdf of the book at the web site: then you are missing the reality that the Church and Pastors were the anchor for all of society.

John Witherspoon nails this Moral Issue in his ‘Lectures on Moral Philosophy’. Sadly we have rejection of this by some of the most pronounced names in the US Evangelical environment. They have become tolerantly co-oped into the ‘social justice’ movement which rejects the fundamental Biblical Principles of our Founding Christian Leaders.

Find out about your County Mental Health Board. What services are offered? Who are the Providers? What is it costing you in Property Taxes and State Medicaid costs? Attend some meetings. There are good resources for those in need but – Remember – The agencies and services are there because Local Christian Churches have ‘Walked Away’ from ensuring there is a Moral Society.

The necessity to restore education with Morality is the beginning of dealing with Mental Health issues. We need to understand that we can either legislate immorality as is being done or return to Founders Original Intent for a moral and virtuous nation.

Think this through: “According to Natural Law theory – rules, statutes, or laws which are inherently unjust or immoral are not true law, and therefore no one is under compunction to follow them. Augustine wrote, “An unjust law is no law at all,” in On Free Choice Of The Will, Book 1, ¬ß 5. This ancient definition well reveals how the early Church deeply influenced the Natural Law tradition.”

1Being Members of the Legislative Body, you will have a special Regard to the Morals of this People, which are the Basis of publick Happiness ; & endeavor to have such Laws made if any are still wanting as shall be best adapted to secure them : and we particularly desire you carefully to look into the Laws of Excise, that if the Virtue of the People is endangerd by the Multiplicity of Oaths therein enjoynd or their Trade & Business is unreasonably impeded or embarrassd thereby, the Grievance may be redressd.

As the Preservation of Morals as well as Property & Right, so much depends upon the impartial Distribution of Justice, agreable to good & wholesom Law : and as the Judges of the Land do depend upon the free Grants of the General Assembly for Support ; It is incumbent upon you at all times to give your Voice for their honorable Maintenance so long as they, having in their minds an Indifference to all other Affairs, shall devote themselves wholly to the Duties of their own Department, and the further Study of the Law, by which their Customs Precedents Proceedings & Determinations are adjusted & limited.
INSTRUCTIONS OF HE TOWN OF BOSTON TO ITS REPRESENTATIVES T N THE GENERAL COURT. MAY, 1764. [MS., Boston F jli Library ; a text appears in Boston Record Commissioners Report, vol. 16, pp. 120-122.]

Regarding the what we call the Boston Massacre:

– Specifically regarding the trial and Jury: “”It is an admirable institution, by which every citizen may be plac’d in a situation, that enables him to contribute to the great end of society, the distributing justice; and it every where diffuses a spirit of true patriotism, which is zealously employed for the publick welfare.” I am not about to arraign the late jurors before the bar of the publick: They are accountable to God and their own consciences, and in their day of trial, may God send them good deliverance. But in times when politicks run high, we find by the experience of past ages, it is difficult to ascertain the truth even in a court of law: At such times, witnesses will appear to contradict each other in the most essential points of fact; and a cool conscientious spectator is apt to shudder for fear of perjury: If the jurors are strangers to the characters of the several witnesses, it may be too late for them to make the enquiry, when they are upon their seats: The credibility of a witness perhaps cannot be impeac’d in court, unless he has been convicted of perjury: But an immoral man, for instance one who will commonly prophane the name of his maker, certainly cannot be esteemed of equal credit by a jury, with one who fears to take that sacred name in vain: It is impossible he should in the mind of any man: Therefore, when witnesses substantially differ in their relation of the same facts, unless the jury are acquainted with their different characters, they must be left to meer chance to determine which to believe; the consequence of which, may be fatal to the life of the prisoner, or to the justice of the cause, or perhaps both. It was for this reason, that I was concern’d, when the council for the crown objected the notoriety of the immoral character of a witness, that he was stopped by one of the council on the other side. In a court of justice, it is beneath any character to aim at victory and triumph: Truth, and truth alone is to be sought after…

…I cannot help thinking, that the reader must have observed in Philanthrop’s last performance, that a foundation is there laid for a dangerous superstructure: and that from his principles, might easily be delineated a plan of despotism, which however uncommon it may be, for the laws and constitution of the state to be openly and boldly oppos’d, our enemies have long threatened to establish by violence. If Philanthrop upon retrospection shall think so, he will, like a prudent physician, administer an antidote for the poison: If not, I hope the attention of others will be awakened to that excellent maxim, “no less essential in politicks than in morals”, principiis obsta**. It is impolitick to make the first attempt to enslave mankind by force: This strikes the imagination, and is alarming: “Important changes insensibly happen: It is against silent & slow attacks that a nation ought to be particularly on its guard.”

**Adhere to first principles. In this sense constitutional rights are to be liberally construed.

And in another letter of the 12th of April following, he writes, “Since my last, I have found too great reason to confirm my apprehensions, that some persons of consequence here, are determined, if possible, to put the future use of the credit of the several governments of New England, wholly under the power of an instruction; and what tendency that may have to introduce the King’s instructions into the government of the other colonies, in other instances, I need not observe This design seems to be conducted with great art.” The fears of that watchful agent, there is reason to apprehend, from the perfect good understanding that now exists between the ruling men in the American department, on both sides the atlantic, may very soon be far from appearing groundless. Instructions have of late been so frequent, and in every instance so punctiliously obeyed, that there is reason to fear, unless greater attention is had to them, they soon will be established as rules of administration, not only to governors as servants of the crown, but to legislatures. The enforcing them seems to be conducted with equal art on this side of the water at present, to that with which the original design of introducing them was conducted on the other side, when that agent wrote. They may soon therefore be regarded as fixed laws in the colonies, even without the sanction or intervention of parliament Principiis obsta, is a maxim worth regarding in politics as well as morals, and it is more especially to be observed, when those who are the most assiduous in their endeavours to alter the civil Constitution, are not less so in persuading us to go to sleep and dream that we are in a state of perfect security.

Edited under the Auspices of The American Philosophical Association

Is it not High Time for the People of this Country explicitly to declare, whether they will be Freemen or Slaves? It is an important Question which ought to be decided. It concerns us more than any Thing in this Life. The Salvation of our Souls is interested in the Event: For wherever Tyranny is establish’d, Immorality of every Kind comes in like a Torrent. It is in the Interest of Tyrants to reduce the People to Ignorance and Vice. For they cannot live in any Country where Virtue and Knowledge prevail. The Religion and public Liberty of a People are intimately connected; their Interests are interwoven, they cannot subsist separately; and therefore they rise and fall together. For this Reason, it is always observable, that those who are combin’d to destroy the People’s Liberties, practice every Art to poison their Morals. How greatly then does it concern us, at all Events, to put a Stop to the Progress of Tyranny. It is advanced already by far too many Strides. We are at this moment upon a precipice. The next step may be fatal to us. Let us then act like wise Men; calmly took around us and consider what is best to be done. Let us converse together upon this most interesting Subject and open our minds freely to each other. Let it be the topic of conversation in every social Club. Let every Town assemble. Let Associations & Combinations be everywhere set up to consult and recover our just Rights.

I intend to try the doubtful experiment, tho’ you should analize a satyr to be a proof of your general consequence, and extract incense to your vanity from the blackest records of your shame.

In your courageous zeal for the cause of christianity, and the Virgin Mary, permit me to question your sincerity: It is evident from your notable performance, that you have been acquainted with the religious principles and immoral practices of the gentleman so very exceptionable to you; for some years past: That he was then as thorough-paced an infidel as virulent an opposer of our holy religion, as he is now: That he was doing discredit to the Bible then, or to adopt your own phrase, was undeceiving mankind as actively as at any time since: That you was acquainted with the open profanity of his conversation, and if we may take your word for it, was an earwitness of his oaths and execrations: Why did you not commence a champion in the cause of christianity some months earlier? it would have had a better appearance, if in your ebullient zeal you had endeavoured to prevent his disseminating such mischievous principles, and seasonably entered your caveat against the pernicious effects of his example. But the cause of christianity abstracted from political concerns, was not sufficient to awaken your resentment: Will not this my dear sir! Occasion suspicions, that all your flaming professions of patriotism will neither discredit nor remove?