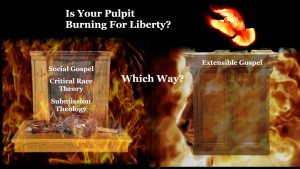 Matt Shea is one to answer a calling that causes pause in some yet energizes others by the full extensibility of the Gospel. This weeks program is an interview with not just a Bronze Star recipient, nor a Washington State Legislator but with a Patriot Pastor.

In this interview with Matt Shea, we discuss the need of Pastors to bring anew the full, complete, extensible Gospel to those who have ears to hear. This means family, manliness, work and yes – self-governance and the political arena.

Having been a State Legislator, Matt knows what the duties of The Lesser Magistrate are. We dive into the effects of bad theology on the culture and our present political/governance situation. Then – we talk about a triangle of evil that Matt has been presenting across the country. In fact, Cathy and I caught up with Matt when he was here in Ohio presenting over a year ago.

This is an information packed interview with Matt Shea that will cause you to dig deeper into yourself, your history, your understanding of political times and ultimately – dig deeper into Gods Word for living the extensible Gospel.

I have said for years that the debasing of our pulpits in relationship to self-governance and governing occurred in the mid – 1800’s. The Social Gospel tied to what was happening since 1797 in Europe and earlier with the rise of Unitarian/Universalism at Kings Chapel, Boston in 1785. The ultimate result is that what was significant in reminding those being seated after their election – that they were ‘under the whole authority of God and responsible to him for all decisions’ – went out of history beginning in Massachusetts in 1884.

The real tragedy here is that the People and nation, as in the Book of Amos, lost their original perspective for religious, personal and political Liberty such that our present is full of the condition that the sheepherder-breeder, Amos, identifies through inspiration in that writing.

Just some thoughts for you to chew on from the introduction to the 1897 book ‘The Massachusetts Election Sermons:

On Wednesday, 7 January, 1885, the General Court of Massachusetts met to organize; the two branches of the Legislature chose their presiding and other officers, and then adjourned to the next day. In obedience to an Act passed , on 6 March, 1884, “To repeal the Public Statutes relating to the Annual Election Sermon,”1 there was omitted from the ceremonies incident to the day an ancient custom, without the observance of which the legislators of earlier days would not have had the temerity2 to begin their public duties. For some years previously, the delivery of the sermon had been tacitly3 acknowledged to have been persevered in more through respect for honorable precedent than as a sincere expression of the religious and political spirit of the age; accordingly this last slight interdependence in the Commonwealth between Church and State had few to mourn its extinction, with the exception perhaps of some persistent admirers of the tempus acturm4.

Now, Jerry Nadler takes the exemplifies this 1884 legislation in making a statement regarding HR1 during debate in the US House of Representatives:

“God’s will is no concern of this Congress”

It is time to rethink God in government. We do discuss this with Pastor Matt Shea.

Just some general quote from Sam to consider:

‘In deed, when we look back upon the many dangers from which our country hath, even from its first settlement, been delivered, and the policy and power of those, who have to this day sought its ruin, we are sensibly struck with an admiration of Divine good ness, and would religiously regard the arm which has so often shielded us.’ Address Of The House Of Representatives Of Massachusetts To The Governor. June 3, 1766.

Consider this in respect to the present and the Civil activities of January 6, 2021:

‘But if it had been a riot, What business would armed soldiers have there, until COMMANDED BY THE CIVIL POWER? It seems to be a prevailing opinion with some folks, that there cannot be a collection of persons in this town, even upon the most necessary occasions, but there must needs be danger of a mob; and then forsooth5, the military must make their ap pearance of their own meer motion, ready cock’d & prim’d, to prevent it. I expect if this opinion should further prevail, very soon to see the picquet guards drawn up before our church doors in time of divine service, to keep the people from mobbing, when the assemblies are dismissed.’ – Article Unsigned. [Boston Gazette, February 13, 1769.]

‘It is presumd that the Aid of one thousand Men at least will be afforded by means of this order. The Council very sensibly feel the Distress which the State of Connecticutt have already sufferd by the Incursions & Depredations of a desperate & malicious Enemy, and trust in God that the People of New England will be always spirited to exert themselves upon every pressing occasion for the Common Safety & that their Exertions will be attended with the divine Blessing.’ – To Jonathan Trumbull. State Of Mass Bay Council Chamber July 13 1779

This should be a program unto itself… Maybe another time:

‘Formerly this great contest was carried on upon paper. The conspirators against the rights and liberties of our country left no art untried, to induce the people to submit to their unrighteous claims. But they were circumvented by our watchful patriots. They were, if I may use the expression, out-reasoned by some, and laughed off the stage by others; and we will never forget those steadfast and persevering friends, who forever prov’d themselves incapable of being brib’d by the soft whispers of flattery, or awed by foulmouthed calumny and the threats of power. Afterwards the contest became more serious and important. The people of this country were not driven to take up arms, they did it voluntarily in defence of their liberty. They properly considered themselves as called by GOD, and warranted by HIM, to encounter every hazard in the common cause of Man. We have had for several years past a well-appointed Army.—An Army of which both Officers and Privates are daily increasing in discipline—An Army inferior perhaps to none at this time on the face of the earth and headed by a COMMANDER, who feels the Rights of the Citizens in his own breast, and experience has taught us, he knows full well how to defend them.—May Heaven inspire that Army yet more and more with Military Virtues, and teach their hands to war and their fingers to fight! May every citizen in the army and in the country, have a proper sense of the DEITY upon his mind, and an impression of that declaration recorded in the Bible, “Him that honoreth me I will honor, but he that despiseth me shall be lightly esteemed.”—”God helpeth those who help themselves,” says an eminent writer. Perhaps the sentiment is better expressed in holy writ, where, when we are bid to work out our own salvation, we are told that “It is GOD who worketh in us.” It seems to be the Divine Constitution, that success shall generally crown virtuous exertions. We have seen this verified throughout this glorious Struggle…’ – ARTICLE SIGNED “VINDEX.” Boston Gazette, June 12, 1780.

1. Listen to Matt Shea and take his points to research more detail.

3 Definition of ‘tacitly’: in a way that is understood or implied without being directly stated

5 Definition of ‘forsooth’: indeed (often used ironically or to express surprise or indignation)