Political Sermons of the Founding and Revolutionary Era 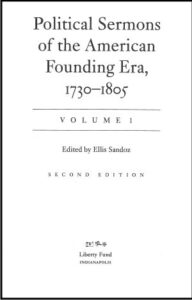 I have often stated that it was the Pulpits preaching Liberty that facilitated the American Revolution through Political Sermons. These sermons were intermixed with regular messages and most often more prevalent during elections, military change of command and when the a colony was called to prayer and fasting by the general assemblies.

Like the Page on the Chaplains and Clergy of the Revolution, This page will be an Index to the Political Sermons.

Just to make it clear as to the importance of the Pulpit in the founding of the nation I refer you back to what Mr. Headley states in his preface of Chaplains and Clergy of the Revolution: “…I feel I have done something towards giving the clergy and the pulpit the place which they ought to have in the history of the Revolution, and furnished a book which will benefit the generation now rising into manhood, by directing the mind not only to religious influences, but to the great source of all national blessings, as well as to battle fields and the strong legions.”

This is the Link to the Index for the Political Sermons as I complete them.

The Intro and Exit music for every Sermon is the 1551 version of Psalm 100. Lyrics at this Link.

Additionally think on these words from the Forward of Volume I of the Political Sermons of the Founding Era;

Inspiration for this collection of sermons came over a number of years as I did research on the American founders’ political philosophy. I discovered that the “pulpit of the American Revolution”—to borrow the title of John Wingate Thornton’s 1860 collection—was the source of exciting and uncommonly important material. What had passed for pamphlets in my reading of excerpted eighteenth-century American material often turned out to be published sermons. I began to realize that this material, showing the perspective of biblical faith concerning fundamental questions of human existence during our nation’s formative period, was extraordinarily abundant and extraordinarily little known.

(Although this paragraph is true for the collected sermons, here at Samuel Adams Returns, we will look at many resources for sermons of like kind)

The rule of this collection has been to reprint unannotated editions of complete sermons that would permit their authors to speak fully for themselves. The genre is the political sermon, broadly construed so as to include a few pieces never preached that are sermonic in sense and tone—that is, hortatory and relating politics to convictions about eternal verities. The chief criterion for selection of the various pieces was their intellectual interest. I was looking especially for political theory in American sermons preached and then published from the onset of the Great Awakening to the beginning of the Second Awakening and Thomas Jefferson’s second administration. An effort was made to diversify viewpoints denominationally, theologically, politically, geographically, and even nationally. Since only previously published materials have been selected—that is, nothing from manuscript sources has been included1 a limitation resided in the fact that the publication of sermons in America in the eighteenth century was a specialty, if not a monopoly, of New Englanders.

Religion gave birth to America, Tocqueville observed long ago.2 On the eve of revolution, in his last-ditch attempt to stave off impending catastrophe, Edmund Burke reminded the House of Commons of the inseparable alliance between liberty and religion among Englishmen in America3 Mercy Otis Warren noted in her 1805 history of the American Revolution: “It must be acknowledged, that the religious and moral character of Americans yet stands on a higher grade of excellence and purity, than that of most other nations.”4 Of the Americans on the eve of the Revolution Carl Bridenbaugh has exclaimed, “who can deny that for them the very core of existence was their relation to God?”

Although they present a range of viewpoints on many different problems over a period of seventy-five years, all our writers agree that political liberty and religious truth are vitally intertwined. And while the role of the clergy as the philosophers of the American founding has not received great attention from students of political theory, it was abundantly clear to contemporaries. Perhaps the best insight into the role of the ministry was expressed by a participant, Reverend William Gordon of Roxbury, Massachusetts, who wrote the celebrated History of the American Revolution. “The ministers of New England being mostly congregationalists,” Gordon wrote, “are from that circumstance, in a professional way more attached and habituated to the principles of liberty than if they had spiritual superiors to lord it over them, and were in hopes of possessing in their turn, through the gift of government, the seat of power. They oppose arbitrary rule in civil concerns from the love of freedom, as well as from a desire of guarding against its introduction into religious matters. . . . The clergy of his colony are as virtuous, sensible and learned a set of men, as will probably be found in any part of the globe of equal size and equally populous. . . . [I]t is certainly a duty of the clergy to accommodate their discourses to the times; to preach against such sins as are most prevalent, and to recommend such virtues as are most wanted. . . . You have frequently remarked that though the partizans of arbitrary power will freely censure that preacher, who speaks boldly for the liberties of the people, they will admire as an excellent divine, the parson whose discourse is wholly in the opposite, and teaches, that magistrates have a divine right for doing wrong, and are to be implicitly obeyed; men professing Christianity, as if the religion of the blessed Jesus bound them tamely to part with their natural and social rights, and slavishly to bow their neck to any tyrant. . .

Whatever the differences among them, all the sermon authors take as their reality the still familiar biblical image of Creator and creation, of fallen and sinful men, striving in a mysteriously ordered existence toward a personal salvation and an eschatological fulfillment. They knew that these goals are themselves paradoxically attainable only through the divine grace of election, a condition experienced as the unmerited gift of God, discernible (if at all) in a person’s faith in Christ, which yields assurance of Beatitude. The relationships are variously symbolized by personal and corporate reciprocal covenants ordering individual lives, church communities, and all of society in multiple layers productive of good works, inculcating divine truth and attentiveness to providential direction according to the “law of liberty” of the sovereign God revealed in the lowly Nazarene. The picture that thus emerges is not merely parochially Puritan or Calvinistic but Augustinian and biblical.

The varieties of spiritual belief fundamental to the writers represented herein cannot be explored here, but some background can be indicated. For though our concern is with political sermons—and thus exceptional expressions of the faith of a people who looked to the eternal beyond for the perfect fulfillment of their pilgrimage through time in partnership with God—the spiritual root of that collaborative enterprise directed by Providence requires a word or two of clarification. Of course, the political background is the direct movement of disparate British colonial societies toward independent nationhood, federally organized under a Constitution that preserves the essentials of English liberty under law. It was a passage of history that involved the concerted effort of military force evinced in the Revolution and the articulation of the principles of free government; these principles inspired creation of a national community and became the grounds of a political orthodoxy called republican and constitutional government. Momentous developments crescendoed with British adoption of the Stamp Act of 1765, leading in little more than a decade to the decision for independence in 1776, which demanded eight years of fighting and formally ended with the signing of the peace treaty in Paris in 1783. The Federal Convention in 1787 provided a barely accepted Constitution, one immediately embellished by a Bill of Rights, that became the supreme law of the land in 1791. By the beginning of Jefferson’s second term, the institutional arrangements had been tested and operations refined, the first party system had emerged, and the country had doubled in size thanks to the Louisiana Purchase. But another strand of history accompanies, interacts with, and gives roots to this familiar progress, one that is less known and lacks the direct line of development just rehearsed.

The revolution in the spiritual life of America began within a decade of the preaching of the first sermon reprinted here, that of the celebrated Benjamin Colman in Boston in 1730. It is called the Great Awakening. There is reason to suppose that the two lines of development are intimately, even decisively, connected. Narrowly construed as occurring in the years 1739 to 1742, the Great Awakening designates the outburst of religious revival that swept the colonies in those years. It reached from Georgia to New England and affected every stratum of society. Since the earthquake of 1727 that Benjamin Colman alludes to in his sermon, however, there had been a quickening of religious impulses. The Awakening was a spiritual earthquake, one that, as Alan Heimert and Perry Miller write, “clearly began a new era, not merely of American Protestantism, but in the evolution of the American mind.” A turning point and crisis in American society, it rumbled and echoed through the next decades.

American events could be seen as part of the general rise of religious sentiment traceable in Europe between 1730 and 1760, particularly in England, where the catalysts were the itinerant Anglican priests John and Charles Wesley, the founders of Methodism, and their compatriot George Whitefield. These men played a large part in rescuing England from the social debauchery and political corruption associated with the Gin Age, aspects of the period portrayed in Hogarth’s prints and Fielding’s novels. Near the end of this volume’s time period the so-called Second Awakening began, starting in 1800–1801 with revival camp meetings on the frontier and in the backcountry. The great political events of the American founding, thus, have a backdrop of resurgent religion whose calls for repentance and faith plainly complement the calls to resist tyranny and constitutional corruption so as to live virtuously as God-fearing Christians, and, eventually, as responsible republican citizens.

Read the rest of the Forward at this Link.