Chaplains and Clergy of the Revolution: Chapter 17 – Timothy Dwight 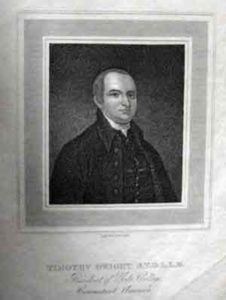 —Patriotism of our Colleges. —Dwight’s Birth. —His early Life. —Tutor of Yale College. —Is licensed to preach. —His Patriotism. —Becomes Chaplain. —Advocates complete Independence. —His Description of the desolate Appearance of Westchester County. —His Sermons to the Soldiers. —Eloquent Sermon after the Victory at Saratoga. —Anecdote of Putnam. —Composes the Ode to Columbia. —Dedicates a Poem to Washington. —Shares the Sufferings of the Soldiers at West Point in the Winter of 177S. —His Faith. —His Description of Scene from Sugar Loaf Mountain. —Also of the Dead Unburied at Fort Montgomery. —Death of ins Father. —Leaves the Army. —Settles at Northampton. —Goes to the Legislature. —Publishes several Poems. —Elected President of Yale College. —A Federalist in 1812. —His Eminence as a Theologian. —His Death.

This chapter detailing Timothy Dwight is another of the amazing chapters in this book! Timothy Dwight was reading the Bible at four and teaching himself Latin at Six. His preaching became impassioned by his ability to see God in all things in creation.

Yet, young Timothy Dwight was a prodigal in that while in college he strayed into the frivolity of college life temptations. Through an a mentor he eluded the destruction of his capabilities and therefore excelled in studies. Subsequently he became highly interested in theology and became a minister at a young age.

Not withstanding his youth and rocky start at Yale, Timothy Dwight becomes the amazing spiritual leader in the Army of Putnam, writes foundational American poetry and songs, becomes an amazing American Theologian, and the eight president of Yale College. Very sad that Yale is not what is was during this time in our history!

Although this is one of the longer chapters in the book it is worthwhile hearing this man’s life summary and doing further research on his writings and preaching.

Comments Off on Chaplains and Clergy of the Revolution: Chapter 17 – Timothy Dwight