Episode 351: Defense of Self AND STATE

Defense of Self AND STATE 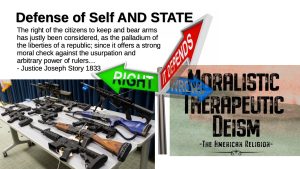 Jump down to the Sam Adams Wisdom and compare our present with what he wrote in 1769.

No Morality Expected or Taught

With the lack of morality in mind, consider that Van Jones praised the Biden rant, I mean speech about gun control. Remember tho that Van Jones is a radical communist as noted here (KeyWikie: Van Jones) and here (‘Racist, Communist’ Green Jobs Czar Van Jones Resigns, OP-ED by Hans Bader • 09/08/2009) Why do I mention this, because this Administration is full of communist and radical socialists like Van Jones and the speech given fits like tight spandex on donkey. Always remember to go back into the Samuel Adams Archives and reflect on how often over the years I have asked you to read ‘Not A Shot Fired.’

I’m keeping the newsletter short because the content is in the audio/video. As I noted in the Facebook post the other day, the original intent of the 2nd Amendment is first, Defense of the State and the Republic from tyranny. Oh but the trembling lipped pundits, conservatives, republicans argue self-defense. Ha! That is a God given (period).

I have to say that one person that I highly respect gets it totally spot on. Mollie Hemingway nails it on “Jesse Watters Primetime” that President Joe Biden‘s speech on gun reform legislation was “an impeachable offense.” She understands and is willing to make it very clear that the 2nd Amendment is for the Defense of Self and State.

To preserve Liberty, One must have all means to do so (period). That means the full capacity that our Founders had not only as Sam Adams writes in 1769 regarding having arms, being rifles, pistols and swords, all military equipment, but also cannons.

I bring this all to the front in this program.

– First segment: Historical basis of Defense of Self AND State

– Third segment: Speak the Whole Truth. NO sidestepping the Defense of the individual, State and Republic.

This begins on page 316 of Volume I, The Writings of Samuel Adams:

‘At the revolution, the British constitution was again restor’d to its original principles, declared in the bill of rights; which was afterwards pass’d into a law, and stands as a bulwark to the natural rights of subjects; ‘To vindicate these rights, says Mr. Blackstone, when actually violated or attack’d, the subjects of England are entitled first to the regular administration and free course of justice in the courts of law next to the right of petitioning the King and parliament for redress of grievances and lastly, to the right of having and using arms for self-preservation and defence.’; These he calls ‘auxiliary subordinate rights, which serve principally as barriers to protect and maintain inviolate the three great and primary rights of personal security, personal liberty and private property ’: And that of having arms for their defence he tells us is ’a public allowance, under due restrictions, of the natural right of resistance and self preservation, when the sanctions of society and laws are found insufficient to restrain the violence of oppression. — How little do those persons attend to he rights of the constitution, if they know anything about them, who find fault with a late vote of this town, calling upon the inhabitants to provide them selves with arms for their defence at any time; but more especially, when they had reason to fear, there would be a necessity of the means of self preservation against the violence of oppression. Every one knows that the exercise of the military power is forever dangerous to civil rights; and we have had recent in stances of violences that have been offer’d to private subjects, and the last week, even to a magistrate in the execution of his office! Such violences are no more than might have been expected from military troops: A power, which is apt enough at all times to take a wanton lead, even when in the midst of civil society; but more especially so, when they are led to believe that they are become necessary, to awe a spirit of rebellion, and preserve peace and good order. But there are some persons, who would, if possibly they could, perswade the people never to make use of their constitutional rights or terrify them from doing it. No wonder that a resolution of this town to keep arms for its own defence, should be repre sented as having at bottom a secret intention to oppose the landing of the King s troops: when those very persons, who gave it this colouring, had before represented the peoples petitioning their Sovereign, as proceeding from a factious and rebellious spirit ; and would now insinuate that there is an impropriety in their addressing even a plantation Governor upon public business Such are the times we are fallen into!

6. You are Being Lied to, Regularly, by James White of Alpha and Omega Ministries

I Cannot forbear making a few observations on the curious and laboured account of the sentiments of the British government, and the debates in the house of Commons on American affairs given in the Court Gazette of Thursday last. What pains are taken to make us believe contrary to the latest and most au thentic advices from home, that the affairs of America in general, and particularly of this province, are in a situation almost desperate, only because a few among us have done every thing in their power to make them so, and cannot endure the thoughts of not having their own prophecies fulfilled, their misrepresentations successful, and their malevolence gratified. It seems that of late administration has not only adopted implicitly the accounts of facts, but the reasonings upon them, and even governmental measures, as they have been stated, and suggested by a few of its servants on this side the water: Hence the embarrassments of the ministry, and the perplexity of the nation, from the unnatural contest with the colonies, at a season when the circumstances of Europe require the most perfect union at home, to give weight to our negotiations, and awe to those who might wish to disturb our repose.

The tenor of his Majesty’s speech at the opening of parliament, as it respects America, is easily ac counted for, from the Budget which about that time was received from hence. The Ministry seem’d to believe, at the first opening of the Budget, that the proceedings of a certain town in America, were not only to the highest degree seditious, but nothing short of treason itself ; and that they had full evidence of all this in their hands. Tho the people at a distance from the seat of government are always under great disadvantages, with respect to a fair state of their case, in any disputes between them and the servants of the crown, yet Truth very soon so far made its own way, that upon a closer inspection into affairs, the charge appeared to be laid too high: Nor is there a person either in or out of parliament, who has justly stated or proved, one single act of that town, as a public body, to be, I will not say treason able or seditious, but even at all illegal: nor is it in the power of any man, either on this or the other side the Atlantic, to do it.

New vouchers, we are told, are called for from authority : This is no favourable symptom to the sudden and warm accusers ; for I believe there are more than one, who may find it an Augean enterprize, to support their own representation. For it is certainly beyond human art and sophistry to prove that British subjects, to whom the privilege of possess ing arms is expressly recognized by the Bill of Rights, and, who live in a province where the law requires them to be equip’d with arms, &c. are guilty of a illegal act, in calling upon one another to be provided with them, as the law directs. But if some are bold and base enough, where the interest of a whole country is at stake, to penetrate into the secrets of the human breast, to search for crimes, and to impute the worst of motives to actions strictly legal, whatever may be thought of their expediency, it is easy to re criminate in the same way ; and one man has as good reason to affirm, that a few, in calling for a military force under pretence of supporting civil authority, secretly intended to introduce a general massacre, as another has to assert, that a number of loyal subjects, by calling upon one another to be provided with arms, according to law, intended to bring on an insurrection.

The remainder of the letter begins on page 299 of The Writings of Samuel Adams Volume I.

Comments Off on Episode 351: Defense of Self AND STATE