Episode 313: When Science Is Not Science – Positivism

When Science Is Not Science – Positivism 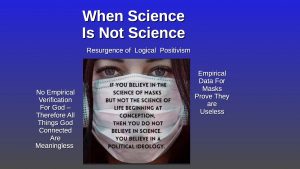 Is Positivism the same as being positive? I have watched the trends of unmoral manipulation in sciences over the last thirty years to the point that Science is Not Science any longer. I have a science background. I speak to the details of my hard science and soft science past on the program. What I discuss in this program is a more simple explanation regarding the politicalization and rationalization of funding for amoral science, especially at the federal level – A hint is: the resurgence of logical positivism.

Cath and I were going through some past teachings of R. C. Sproul when one came up on Logical Positivism. I had not even thought about that in years and then it hit me like a rock that the resurgence of that philosophy is a core tenet of what is occurring in the political realm but worse, what is the rational of all things science at the federal level. Hence, the ChicomFlu and all the actions around it are inescapably the empirical castings of Logical Positivism. Yes, there is a resurgence in actively implementing logical positivism.

What is it? The dictionary of psychology defines logical positivism as:

‘…a philosophical perspective that is committed to the principle of verification, which holds that the meaning and truth of all nontautological1 statements are dependent on empirical observation. In the early 20th century, the positivists of the Vienna Circle sought to establish the essential unity of logic, philosophy, and science and to distinguish these disciplines from others such as metaphysics, ethics, and religion, which were dismissed for their speculative character. The positivist view of science was influential during the period in which psychology emerged as a science and has had a recognizable influence on the discipline.’

The resurgence never left the soft sciences. From a 2015 article titled ‘The rise and fall of logical positivism’

‘…Economists in particular, and most social scientists in general, continue to believe in positivist ideas, and to use them as a basis for research. Inertia keeps professionals wedded to this obsolete philosophy, since replacing it would require rejection of 50 years or more of theorising. Nonetheless, a radical re-thinking is the need of the hour, since the positivist rejection of human experience as a source of knowledge has led to impoverished theories in social sciences, which are manifestly incapable of dealing with looming catastrophes on several fronts.’

Applied in Politics and Law

As we consider the founding documents all the way back to Mayflower Compact, we know explicitly that God is referenced in the fullest Biblical sense as the author of all creation. Therefore as we get to the Declaration of Independence, we have a clear understanding as to where our ‘inalienable rights’ come from. Unfortunately, the source of our rights is no longer based on Foundational facts.

Let that sink in as you look at the forthcoming ChicomFlu shutdowns, mask and jab mandates. Those in the government bureaucracies and science are the final arbiter’s of mandating submission to the government mandates. According to positivism, there are no God given rights.

Keeping this simple, the philosophy of positivism allows for morals developed by those who define what their intended outcome is to be. Therefore, morality has no absolutes and is dynamic according to the society congregated in some demographic and a geographic local. With this presupposition, the University of Pittsburg can harvest body parts from babies and the NIH can fund the practice with taxpayer dollars.

Better yet, ‘gain of function’ research can be funded by government entities because there is ‘no’ moral qualifier respecting genetic mutations. With that, using manipulating RNA for genetic experimentation on the global population has no moral consciousness, hence any debilitating results are not even worth reporting on. You know, the fact that humans can be vax’ed like cattle keep the positivist in power.

By the way, try this on for size when Science is not Science: Congress Has Refused To Enforce Perjury, And Now People Like Fauci Lie To Them Constantly

Keeping it simple: Faith is so much simpler then a search for empirical verification. Logical Positivism allows for the denial of all things God. With that, you can be your own god and set all morality according to and for your research. Not only that, it justifies government political leaders and bureaucrats obviating ‘inalienable rights.’

So as to keep your gravity centered, Here I submit three quotes from Sir Isaac Newton with the last being the empirical verification for the positivist:

‘From this fountain (the free will of God) it is those laws, which we call the laws of nature, have flowed, in which there appear many traces of the most wise contrivance, but not the least shadow of necessity. These therefore we must not seek from uncertain conjectures, but learn them from observations and experimental. He who is presumptuous enough to think that he can find the true principles of physics and the laws of natural things by the force alone of his own mind, and the internal light of his reason, must either suppose the world exists by necessity, and by the same necessity follows the law proposed; or if the order of Nature was established by the will of God, the [man] himself, a miserable reptile, can tell what was fittest to be done.’

‘He rules all things, not as the world soul but as the lord of all. And because of his dominion he is called Lord God Pantokrator. For ‘god’ is a relative word and has reference to servants, and godhood is the lordship of God, not over his own body as is supposed by those for whom God is the world soul, but over servants. The supreme God is an eternal, infinite, and absolutely perfect being; but a being, however perfect, without dominion is not the Lord God.’

‘In want of other proofs, the thumb would convince me of the existence of a God.’

1.b. Ligonier Ministries on Positivism

1.c. Positivism and the Burden of Proof by Will Vickery

1.e. The Return Of The Logical Positivist

1.f. Critical to understand the background of proponents to logical positivism: A.J. Ayer and Logical Positivism

4. The philosophy of COVID-19: is it even possible to do the ‘right thing’?

1. Vaccine And Mask Coercion Is A Purge Of Republican Voters, And Republicans Are Letting It Happen

3. 85 Things You Can Do To Help The United States Shake Wide Awake

1Definition of tautological: Logic a statement that is true by necessity or by virtue of its logical form. Therefore, nontautological is:

Comments Off on Episode 313: When Science Is Not Science – Positivism