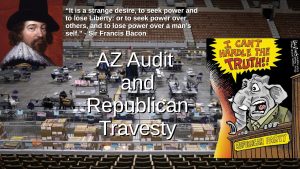 On this program we discuss the AZ Audit and Republican Travesty with my friend Ted Farmer. Ted was involved early on in the AZ Audit. He shares his first hand experiences and opinion on what he participated in.

With Ted, I delve into the Republican Travesty. Yup, the problems in the republican party are systemic. We compare notes between the State of Arizona Republican Party and that in Ohio. I’m sure that you can compare your own state as well. Simply put, the Republican Travesty is that the central committees, especially at the state level, don’t care about Liberty.

In our conversation, Ted makes a huge revelation that exposes the key language of the RINO and establishment. Listen close in the 3rd segment for this revelation and see that it is true in your local Republican party as well as State and National.

In the AZ Audit, it is clear and we must understand that the hitches, hiccups and down right nastiness has come from the Republican elite, RINOS and Republican socialists as well as every other mix that is about party and power…. NOT Liberty.

A win for Citizens Rights!

In our County the Department of Health Director/Commissioner is appointed by the health board. The board is appointed by Township Trustees and representatives of cities and villages. Making this short, to which I will follow up with a program next week, is that the said Health Director constantly expressed his political ideology on his personal Facebook page and, in exercising his office he personally harassed the Amish community regarding health practices and specifically regarding the ChicomFlu and the jab.

To say the least, his personal expressions are socialist ideologies. With this, over the last couple of weeks he posted on Facebook regarding those refusing to take the jab. In effect, he violated his Oath to the Ohio Constitution, specifically Article I. His management of the department was inefficient and caused other issues withing the county.

Well, Citizens had enough. And thanks to the lead of the Geauga County TEA Party, over 200 citizens went to the most recent County Health Department meeting. They expressed there concerns and many demanded the termination of the Health Director/Commissioner.

I could not make the meeting but at the onset of this situation submitted a letter to my Township Trustees and the County Commissioners. Remember, use the Doctrine of the Lesser Magistrates. In Ohio, the Township Trustees determine the makeup of the Health Board. My Trustees sent my letter to the Health Board. If you are interested you can read my letter on the web site after the podcast and video go up on Saturday.

In Short: The Geauga County Health Board, a bureaucratic entity, immediately terminated this Director/Commissioner. You can read a citizen journalist recap of the events here.

Let this be an example to all that when the people rally for the correct reason, bureaucrats and politicians can be persuaded to act Constitutionally. I suggest that you get active in your local groups.

If you want to re-secure your God given Constitutional Rights then get your butts our of your seats and become active participants. That is what the Founders expected.

The Power of removing federal Officers at the Pleasure of the President is to be found the Constitution or it is not. If it is, What Need was there of an Act or Decision of Congress to authorize it? But if it is not, could Congress give so important a Power? What have the United States been contending for? Liberty. This is the great Object of their State Governments, and has not the federal Constitution the same Object in View? If therefore a Doubt arises respecting the Exercise of any Power, no Construction, I conceive, should militate with the main Design, or Object of the Charter. If there is a total Silence in the Constitution, is it not natural to conclude that an Officer holding during Pleasure is removable by the same Power which appointed him, whether vested in a single Person, or a joint Number? I am sensible, it is said, that a single Person, being amenable for his Exercise of Power will use the utmost Circumspection. This may be true, but may not this Idea be carried too far in Practice? May not some Powers vested in a single Man give him such Weight and Influence as to render any Restraint from his feeling himself amenable of little, or no Effect. If this Power lodged in the Discretion of a single Person will afford a greater Security against Corruption because of his Amenability, why should not the Power of appointing as well as removing Officers be given to him? In the one Case the gracious Hand may be held forth, in the other, the threatning Rod; and both may be used for improper Purposes. In England, “the King can do no wrong” is a Maxim. His Ministers are made accountable for him; and how often have corrupt Ministers and Councellors been brought to the Block fo Follies and Crimes committed by their Royal Masters who can do no Wrong? And it may also be asked, how often such Ministers and Councellors have found Means to get themselves screened from Punishment through the Influence of their Masters, by procuring Parliamentary Sanctions to such Crimes and Follies? But in the Removal of Officers the President has not a Constitutional Council. He must therefore be solely accountable. I need not tell you who have known so thoroughly the Sentiments of my Heart, that I have always had a very high Esteem for the late Commander in Chief of our Armies; and I now most sincerely believe that while President Washington continues in the Chair he will be able to give to all good Men a satisfactory Reason for every Instance of his public Conduct. I feel myself constrained contrary to my usual Manner to make Professions of Sincerity on this Occasion because Dr Gordon in his History of the Revolution, among many other Anecdotes innocent and triffling enough, has gravely said, that I was concerned in an Attempt to remove General Washington from Command; and mentions an anonymous Letter written to your late Governor Henry which I affirm I never saw nor heard of till I lately met with it in reading the History—This is a Digression to which a Man of my years is liable. Who will succeed the present President for it is the Lot of Man to die? Perhaps the next and the next may inherit his Virtues. But my Friend, I fear the Time will come, when a Bribe shall remove the most excellent Man from Office for the Purpose of making Room for the worst. It will be called an Error in Judgment. The Bribe will be concealed. It may however be vehemently suspected & who, in Times of great Degeneracy will venture to search out and detect the corrupt Practices of great Men? Unless a sufficient Check is provided and clearly ascertained for every Power given, will not the Constitution and the Liberties of the Citizens for want of such Checks be finally subverted.

– Wishful thinking but most likely not reality: Backers of Maricopa County election audit claim they can overturn results

2. Vaccination, the Law, and the Common Good

The next three post from my Friend Gary Randall

3. A must read: WA State to Evaluate Personal Faith

Comments Off on Episode 315: AZ Audit and Republican Travesty