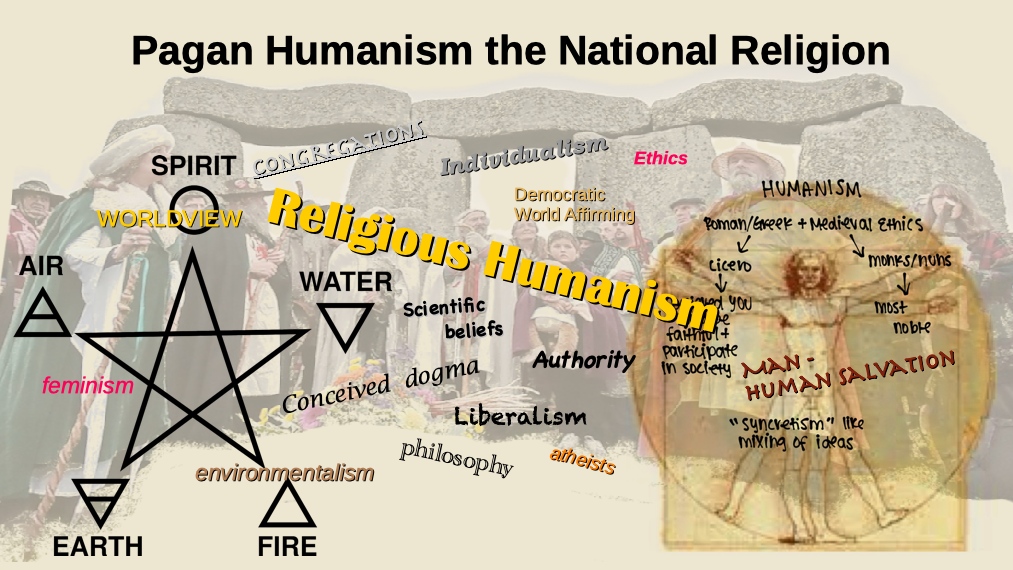 I am compelled to open with a plea from the humanist for pagans to join them in what they intend to accomplish. The appeal, ‘Paganism’ is by the American Humanist Society inviting pagans to see the commonalities in beliefs and objectives. Next week, this will be a foundation for understanding the local, state and federal funding of this combined effort as Pagan Humanism – the National Religion.

I am taking you through the 500,000 foot view of the Scottish Enlightenment and the shifts in theology that set the stage for humanism and the return of paganism. We will sprint through the Enlightenment and Presbyterianism and maybe look at the Hellfire Club – was a name for several exclusive clubs for high-society rakes1 established in Britain and Ireland in the 18th century. The Hellfire Club is the precursor to the Club of Rome which we will elaborate on next week. This is a deeper dive into the shift in Enlightenment theology that is the foundation for what we look at in the Pew Study noted above. I will begin this review in a manner that fits what we now have as Christian Humanism.

A deeper look at the Pew Study noted above. I will be assessing the section on ‘Religious denomination among Mainline Protestants by political ideology.’ This is complex yet it establishes what I will discuss next week in that ‘Neo-paganism’ could be the new religion in America or better yet it is the root of pagan humanism. I will close this program with one absolute direct proof that the federal government is funding this National Religion.

This series will finish up next week with details of, at a minimum, the international influence for the U. S. National Religion, as well as those ‘religious groups, religious NGO’s and United Nations directed entities’ receiving taxpayer money. In fact, all that is established in policy and law which instantiates pagan humanism does violate the 1st Amendment Establishment Clause.

Once again, there is no way to keep this simple. Next week, Part 4, will show the details of the Federal government establishing and funding the new National Religion.

“AN AMERICAN” TO THE EARL OF CARLISLE AND OTHERS.

‘…Your Excellencies will, I hope, excuse me when I differ from you as to our having a religion in common with you; the religion of America is the religion of all mankind. Any person may worship in the manner he thinks most agreeable to the Deity; and if he behaves as a good citizen, no one concerns himself as to his faith or adorations, neither have we the least solicitude to exalt any one sect or profession above another.’

‘Mr Sherman was so obliging as to give me the perusal of your Letter to him, and I am happy that Congress as a Body concurs with you in the Sentiment therein contain’d; having passed a Resolution by a great Majority expressing their Sense that true Religion & good Morals are the only solid Foundations of publick Liberty and Happiness.’

MANIFESTO OF THE CONTINENTAL CONGRESS.

‘Their prisons have been the slaughter-houses of her soldiers, their ships of her seamen, and the severest injuries have been aggravated by the grossest insults.

Foiled in their vain attempts to subjugate the unconquerable spirit of freedom, they have meanly assailed the representatives of America with bribes, with deceit, and the servility of adulation. They have made a mock of religion by impious appeals to God, whilst in the violation of His sacred command. They have made a mock even of reason itself, by endeavoring to prove that the liberty and happiness of America could safely be intrusted to those who have sold their own, unawed by the sense of virtue or of shame.

Treated with the contempt which such conduct deserved, they have applied to individuals. They have solicited them to break the bonds of allegiance and imbue their souls with the blackest crimes. But fearing that none could be found through these United States equal to the wickedness of their purpose, to influence weak minds they have threatened more wide devastation.

While the shadow of hope remained that our enemies could be taught by our example to respect those laws which are held sacred among civilized nations, and to comply with the dictates of a religion which they pretend, in common with us, to believe and revere, they have been left to the influence of that religion and that example. But since their incorrigible dispositions cannot be touched by kindness and compassion, it becomes our duty by other means to vindicate the rights of humanity.’

1. The Scottish Enlightenment and Presbyterianism from Mises Institute

2. A Short History Of Scotland Before The Scottish Enlightenment

3. Scottish Enlightenment: Philosophy and religion from National Library of Scotland

4. How the Enlightenment Worked By: Cristen Conger

5. Hellfire Club – was a name for several exclusive clubs for high-society rakes established in Britain and Ireland in the 18th century.

2. Why Spinoza Was Excommunicated by Steven Nadler, published in HUMANITIES, September/October 2013, Volume 34, Number 5

4. How did Christianity replace Roman Paganism and other ancient religions?

5. Late-Victorian Paganism: the case of the Pagan Review

9. Could neo-paganism be the new ‘religion’ of America?

11. What is being taught now: The United States Is Not a Christian Nation.  It Never Has Been, and It Never Will Be, Brian Bolton