Episode 377: Global Reset Being The Economics Of Two Religions

Video of the Economics of Two Religions are at: Rumble Or YouTube

Not withstanding this discussion on the economics of two religions, I have to note the 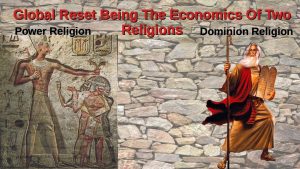 deeper damnation of these United State are being put under due to codifying immorality once again. This past Tuesday the US Senate presumably completed the passage of the Radical Respect for Marriage Act. See also the USA Today Article: Senate passes landmark legislation protecting same-sex marriage rights: recap .This law fully uses Article IV §1 ‘Full faith and Credit’ clause and the Obergefell ruling, which again misused the 14th Amendment of the US Constitution. Now we know that SCOTUS took an immoral position in 2015 with Obergefell v. Hodges, which my state, Ohio, was one of the petitioning States in this case. SCOTUS ruled against the citizens and Constitutions of Ohio, Michigan, Kentucky, and Tennessee.

Just remember, that morality can be legislated. The question is: Whose and which morality? And to get the hair on your neck raised I want to use a quote I would have liked to come up with in regard to Christian letting humanists, secular or christian, control most everything:

‘Christians have resigned themselves to be breeders for the Secularists.1’

The Economics Of Two Religions

This program is back to economics, that of the Global Reset Being the Economics of Two Religions. Once again, I am several decades late in finding a way to be a greater influence on those around me. I am going back in time here, to the ancient days of the mid-1980’s. Yet, the point of The Economics of Two Religions is ‘get a general sense of what happens in the field of economics when rival religions clash: power religion vs. dominion religion.’ – Gary North, Moses and Pharaoh, page 18 END_OF_DOCUMENT_TOKEN_TO_BE_REPLACED

Comments Off on Episode 377: Global Reset Being The Economics Of Two Religions 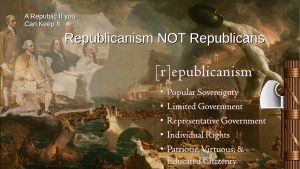 Therefore, we see the left, the American Marxists, take over the bureaucracies, political parties and even elected offices by using ‘The Law.’ Thereby perverting the republicanism of our founding. END_OF_DOCUMENT_TOKEN_TO_BE_REPLACED