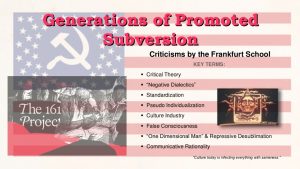 This is nothing new, that being the concept of subversion, since in deed it started in the Garden of Eden with the encounter between Satan and Eve. Yes, I will be bold enough to state clearly that subversion is the work of Satan, plain and simple. I will leave it to the worthy pulpits to take my position of early subversion to its proper Biblical discourses. END_OF_DOCUMENT_TOKEN_TO_BE_REPLACED