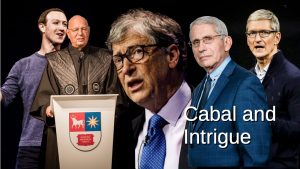 Video available on Rumble  or Brighteon

Cabals and Intrigues are in-your-face active in every corner, shadow and building top in these United States.

I want to emphasize my statement in that a cabal is ‘a secret political clique or faction.’ Well, there are no longer ‘secret political cliques or factions.’ They are in the open. As I have been discussing for decades, the Marxist and Gramsci-ites speak, act and attack with impunity. These entities are factions that are fracturing our Republic.

What about intrigues? Once again the verb and noun form of intrigue share the same definition where one is active and other is descriptive. As a verb, ‘to make secret plans to do something illicit or detrimental to someone,’ and as a noun, ‘the secret planning of something illicit or detrimental.’ In our present time, intrigue is the implementation of CRT, SEL, Cancel Culture, Demeaning foundational history, Devaluing education and Sabotaging Christianity, Economic wealth transference, Capitulation to Gramsci-ites and Marxists, domestically and internationally.

All of this simply summarized by the Anti-federalist ‘Centinel’ with, ‘not considering that the love of domination is generally in proportion to talents, abilities, and superior acquirements; and that the men of the greatest purity of intention may be made instruments of despotism in the hands of the artful and designing.’ The fully exposed 20th and 21st century cabals and intrigues do dominate at this moment.

I watch CPAC this week and their 2022 tag line is ‘Awake Not Woke.’ In this weeks program I mention one of the differences between our Founding era and now is the Great Awakening that God produced amongst the people. My simple comment for this blog is that we must pray that the pulpits awaken to Biblical Reformation truth as well as the Citizenry become awakened by the Spirit of God to repentance and action.

No man can cause this work to happen. It will be the mercy of Jesus as He did during the founding of our nation. I will be talking more about the Great Awakening over the course of the year.

Consider this as a comparison from an article by a friend of my, Pastor Gary Randall, between the state of Christian Churches before the Great Awakening and now,

Pastor Jim Garlow, a well-known pastor and leader in the conservative movement, said recently to a group of pastors, “There are approximately 364,000 churches in America: 72% or 264,000 of them are liberal, meaning that they really don’t care about the Bible.”

He continued, “According to exhaustive surveys, somewhere between 6000 and 15,000, actually have a bona fide biblical world view, that is, they see life through the lens of Scripture.”

I just want to let you know that as of March 4th, Samuel Adams Returns will join the Wilkins Christian Radio Network. In the Kansas City, Missouri area, tune in on Friday’s at 6:30 PM to 7 PM at KCNW AM 1380 & FM 96.1.

Sam Adams understood ‘cabals and intrigue’ as well as those designing men and women that would enslave a Citizenry. Once again Sam presents his wisdom:

As ‘Alfred’ in 1769, ‘…But tho the colonies were so well dispos’d to wards the mother country, it must not be forgot that there was a cursed Cabal, principally residing in this town, who having been disappointed in their expec tations of the sweets of the stamp-act, were perpet ually intriguing to bring about another parliamentary tax-act; for no other purpose than that they might feast and fatten themselves upon the spoils and plunder of the people and I am persuaded the nation would not have been so impolitick as to have pass’d another revenue act for the colonies so soon after the confusion which the stamp-act had occasioned on both sides the water, had not this Cabal found means to induce the men in power at home to believe, that the opposition to that act was “a faction” that rag’d indeed for a while, but was then an “ex piring faction”; and that the generality of the people, now under the influence of the “better sort”, and those whom they were pleas’d to call the ”friends of government” who “feared GOD and honor’d the King”, were become perfectly reconciled to the measure, and the experiment might be tried with safety and success.’

And as ‘DETERMINATUS’ in 1770, ‘The agreement of the Merchants of this distressed and insulted continent, to with hold importations from Great Britain, it seems to be allowed on all sides, has the strongest tendency towards the repeal of the acts of parliament for raising a revenue in America without our consent. It is no wonder then, that it was oppos’d with so much vehemence at first, by the Cabal; who knew full well, that their Places and their Pensions, and all the delectable profits which they expected to reap, and are now actually reaping, at the expence of the people in town and country, would entirely cease, if these acts, by the means of which their places, pensions and profits arise should be repealed.’

‘This restless faction could not bear to see the Americans restored to the possession of their rights and liberties, and sitting once more in security under their own vines and their own fig trees: Unwearied in their endeavours to introduce an absolute tyranny into this country, to which they were instigated, some from the principles of ambition or a lust of power, and others from an inordinate love of money which is the root of all evil, and which had before possessed the hearts of those who had undertaken to distribute the stamped papers, they met together in cabal and laid a new plan to render the people of this continent tributary to the mother country. Having finished their part of the plan, their indefatigable Randolph was dispatched to Great-Britain to communicate it to the fraternity there, in order that it might be ripen’d and bro’t to perfection: But even before his embarkation, he could not help discovering his own weakness, by giving a broad hint of the design.’

Comments Off on Cabals and Intrigues and Great Awakenings