Chaplains and Clergy of the Revolution: Chapter 30 – Israel Evans 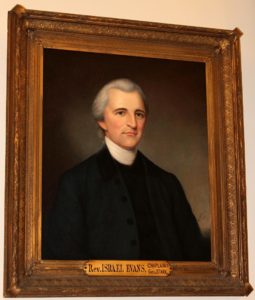 The quick picture of Israel Evans: — His Character. — Ordained Chaplain in the Army. — Remains with His New Hampshire Brigade through the War. — Stands Beside Washington at Yorktown. — Anecdote of Him and Washington. — His Sermon on the Field of Battle. — Settled at Concord, New Hampshire. — His Death.

Israel Evans was one with and of the heart and spirit of King David. He was finally attuned to military life, battle and the “Extensibility” of the Gospel. His harrowing times in all battles are not well documented but he was next to Washington at Yorktown when a cannon ball hit at their feet. END_OF_DOCUMENT_TOKEN_TO_BE_REPLACED

Comments Off on Chaplains and Clergy of the Revolution: Chapter 30 – Israel Evans