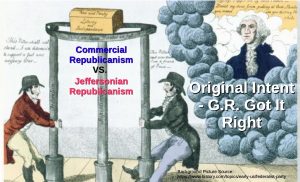 Then the phone call comes last week. It was my friend G. R. Mobley. During the call we discussed my tagline, ‘the Anti-federalist Got It Right,’ to which I ensured G. R. that this tagline is referencing the predictiveness of their writings in relationship to our present time. With that settled, G. R. suggested that I remember the State Ratifying Conventions. Wow, I hadn’t read those in a while.

To have me remember the fact that these debates fundamentally established ‘Original Intent,’ G. R. quoted Madison:

I have recd. yours of the 8th. instant on the subject of the proceedings of the convention of 1787.

It is true as the public has been led to understand, that I possess materials for a pretty ample view of what passed in that Assembly. It is true also that it has not been my intention that they should for ever remain under the veil of secrecy. Of the time when it might be not improper for them to see the light, I had formed no particular determination. In general it had appeared to me that it might be best to let the work be a posthumous one, or at least that its publication should be delayed till the Constitution should be well settled by practice, & till a knowlege of the controversial part of the proceedings of its framers could be turned to no improper account. Delicacy also seemed to require some respect to the rule by which the Convention “prohibited a promulgation without leave of what was spoken in it”; so long as the policy of that rule could be regarded as in any degree unexpired. As a guide in expounding and applying the provisions of the Constitution, the debates and incidental decisions of the Convention can have no authoritative character. However desirable it be that they should be preserved as a gratification to the laudable curiosity felt by every people to trace the origin and progress of their political Institutions, & as a source perhaps of some lights on the Science of Govt. the legitimate meaning of the Instrument must be derived from the text itself; or if a key is to be sought elsewhere, it must be not in the opinions or intentions of the Body which planned & proposed the Constitution, but in the sense attached to it by the people in their respective State Conventions where it recd. all the authority which it possesses.

Such being the course of my reflections I have suffered a concurrence & continuance of particular inconveniences for the time past, to prevent me from giving to my notes the fair & full preparation due to the subject of them. Of late, being aware of the growing hazards of postponements, I have taken the incipient steps for executing the task; and the expediency of not risking an ultimate failure is suggested by the Albany publication from the notes of a N. York member of the Convention. I have not seen more of the volume than has been extracted into the newspapers, but it may be inferred from these samples, that it is not only a very mutilated but a very erroneous edition of the matter to which it relates. There must be an entire omission also of the proceedings of the latter period of the Session from which Mr. Yates & Mr. Lansing withdrew in the temper manifested by their report to their Constituents: the period during which the variant & variable opinions, converged & centered in the modifications seen in the final act of the Body.

It is my purpose now to devote a portion of my time to an exact digest of the voluminous materials in my hands. How long a time it will require, under the interruptions & avocations which are probable I can not easily conjecture. Not a little will be necessary for the mere labour of making fair transcripts. By the time I get the whole into a due form for preservation I shall be better able to decide on the question of publication.4 As to the particular place or press, shd. this be the result, I have not as must be presumed, turned a thought to either: nor can I say more now than that your letter will be kept in recollection, & that should any other arrangement prevail over its object, it will not proceed from any want of confidence esteem or friendly dispositions; of all which I tender you sincere assurances.

OK, G. R. did not read the whole quote but had me focus on ‘if a key is to be sought elsewhere, it must be not in the opinions or intentions of the Body which planned & proposed the Constitution, but in the sense attached to it by the people in their respective State Conventions where it recd. all the authority which it possesses.’

Yet Madison knew that Hamilton and Chief Justice Marshall had already turned the Original Intent of the States in Ratification on their heads toward the Federalists desires for a consolidated federal government.

Consider this from a 2006 article in the William and Mary Law Review titled ‘Tucker’s Rule”: St. George Tucker And The Limited Construction Of Federal Power By Kurt T. Lash:

Fortunately the story does not end with Story. The States began a series of proposed amendments as a backlash. They wanted to check this federal centric court. But we will deal with this more in another Episode.

At our present time we are not just embroiled in the ideological mayhem of socialism and outright communism in the executive branch, courts and the legislature, but more so, the philosophy of ‘commercial republicanism’ is holding the truth of the Original Intent of Constitutionalism by the envy to be like Warren Buffet, except most folks don’t want to support leftist. The point is that Hamilton in his play to force a consolidated government by eliminating the sovereignty of the States, established what we see from the Buffetts, Gates and Sillycon Valley oligarchs. Oh, there are others of the Davos kind that do not want populism of the Jeffersonian republicanism model.

To this I have to slow down and have you listen to the program since I will introduce you to the collaborative efforts of Madison and Jefferson to halt the ‘commercial republicanism’ of Hamilton, Story and Chief Justice Marshall. 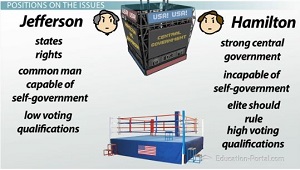 In other words, our present time is not just seeing the implementation of socialism and radical Marxism but the door was open to these political economic ideologies because we allowed ‘commercial republicanism’ to reign in these United States for over 100 years. In the mirrors of history this IS the Hamiltonian philosophy of constitutionalism coming to fruition.

To get the rest of the story, keep coming back as I will unravel the mystery of Original Intent via the States Ratifying Conventions and…. Maybe I can get G. R. Mobley to join me for some intense conversation on how to drain the swamps.

TO THE LEGISLATURE OF MASSACHUSETTS. JANUARY 16, 1795.

‘…Those who wish to persuade the world to believe, that a free representative Republic cannot be supported, will no doubt make use of every art to injure, and by degrees to alter, and finally to eradicate the principles of our free Constitutions: But the virtuous and enlightened citizens of this Commonwealth, and of all united America, have understanding and firmness, sufficient to support those Constitutions of Civil Government which they have themselves formed, and which have done them so much honor in the estimation of the world.

It is with pain that I mention the insurrection which has lately taken place in a sister state.17 It was pointed more immediately at an act of the Federal Government. An act of that government, as well as of the governments in the Union, is constitutionally an act of the people, and our Constitutions provide a safe and easy method to redress any real grievances. No people can be more free under a Constitution established by their own voluntary compact, and exercised by men appointed by their own frequent suffrages. What excuse then can there be for forcible opposition to the laws? If any law shall prove oppressive in its operation, the future deliberations of a freely elective Representative, will afford a constitutional remedy. But the measures adopted by The President of the United States, supported by the virtue of citizens of every description, in that, and the adjacent states, have prevailed, and there is an end of the insurrection. Let the glory be given to Him, who alone governs all events, while we express the just feelings of respect and gratitude due to all those, whom He honours as instruments to carry into effect his gracious designs.’

4. Jonathan Elliot, The Debates in the Several State Conventions of the Adoption of the Federal Constitution vol. 1 [1827]

7  The “whisky insurrection,” in Pennsylvania.

Comments Off on Episode 307: Original Intent – G.R. Got It Right