Tag Archives: Persecution in US 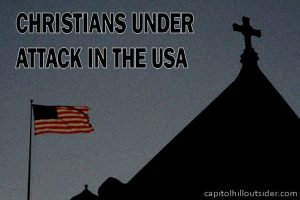 With this being a long weekend for Independence Day on Thursday, the decision to rebroadcast a program was prudent. This program is even more timely than it was two years ago when I first did it. The Attack on Christianity in America is even greater then 2017 and yes, It is the fault of many of the pulpits. Why? Because many pastors are now engrossed in or tolerant of the ‘social justice warriors’ in the various denominations. Sorry, but that is not what the Pastors, the Clergy and Theologians of Americas Founding thought or taught. With all that is in this program, I will continually press you to read or listen to “The Chaplains and Clergy of the Revolution”.

I use the picture that I did since I’m doing more writing that will be published at The Capitol Hill Outsider. END_OF_DOCUMENT_TOKEN_TO_BE_REPLACED

Comments Off on 7-6-19 Attack On Christianity: It’s Your Fault!