Watch video at Rumble or

Facts are never wanted when emotion can drive the results. I am expanding on some previous discussions regarding the History of Contentious Political Rhet 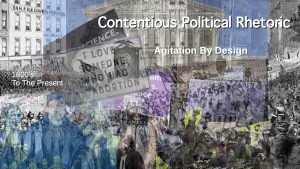 oric. Except as we approach this November 8th, we truly see the communist dialectic in full bloom with the addition of actual physical turbulent ruthlessness and strong-arm-tactics.

This week I’m not writing a lot of content. I am giving you a good number of references to review and am talking about the periods of most contentious political rhetoric.

I am also looking at the communication methodologies used by the socialists, Marxists and other haters of true Liberty. Yes, as many of you are aware, the media is the extension of these ideologies and is the most studied in group messaging propaganda. Let’s begin with this quote:

‘The common element in all of this is the degeneration of language into an instrument of rape. It does contain violence, albeit in latent form. And precisely this is one of the lessons recognized by Plato through his own experience with the sophists of his time, a lesson he sets before us as well. This lesson, in a nutshell, says: the abuse of political power is fundamentally connected with the sophistic abuse of the word, indeed, finds in it the fertile soil in which to hide and grow and get ready, so much so that the latent potential of the totalitarian poison can be ascertained, as it were, by observing the symptom of the public abuse of language. The degradation, too, of man through man … by all tyrannies, has its beginnings … when the word loses its dignity.’ – JOSEPH PIEPER

To this point of language degeneration add the manipulation to purposeful contention via agitation as in: (my addition in italic)

‘But the overall effect of agitation will be a powerful force in compelling people to action, often around a new question or outrage which is completely unrelated to the specific things exposed before. Of course the Party (today’s Democrat party) must seek to concentrate on promoting such major struggles, and its agitation must play a role in publicizing, popularizing and organizing them. There is a role for calls to actions, but they should not be confused with agitation which occupies an overall more important place than such calls to action.’ – On the Role of Agitation and Propaganda,