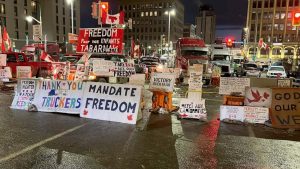 We see the freedom trail Truck’n Liberty all across Canada and the rumblings of the same here in the US. U. S. Citizens think is great and they want to support Liberty minded Canadian Trucker believing that they have the same constitutional rights as we do. Not True. As established all the way back to the 1600’s, those in the American Colonies stood their ground on rights being God given. Not so anywhere else in the world.

Why do you think that the O’biden administration is telling Canadian leaders to use the full force of ‘federal powers against the truckers’? Why are you seeing some Canadian Provinces removing mandates and others digging in their boots? Do you believe that Canadians have the same ‘rights’ as you, a U. S. Citizen? Regarding ‘rights’ the answer is Not really but.

I explain this in detail on this weeks program. For those that are impatient, it all centers on Constitutionalism identifying where ‘rights’ come from.

Truck’n Liberty Comes to U. S.

I have discussed ‘economy obfuscating and minimizing liberty’ on a number of different programs and lectures. Now we have U. S. truckers beginning their trek across the country. But what is this? Are most really worried about the Super Bowl? Do you really believe that the Department of Homeland Security is worried about disruptions of a corporatist gladiator show? By the way, in the article, DHS indicates that the U. S. Truck’n Liberty is ‘all talk’ at this time but could escalate at any time. Hmmm, I’m think’n the movies Minority Report and with the bioweapon of Wohan Gattaca. Gee, science fiction?

Let’s be clear, although we have God given rights in the U. S., corporatists, unions and systematic government are only interested in economy. Go search the web and you find all those in the U. S. against Truck’n Liberty truckers: Major auto companies, teamsters Union, Federal Trade Commission, US Chamber of Commerce, just to name the top few.

Well, our Founders were all about Liberty above economy and at time starved for the cause to keep free.

I don’t intend to spend a lot of time on this but simply put – Voting Rights were dealt with in 1870 with the 15th Amendment as well as 1973 with the Voting Rights Act (period). You can read about it at this paper where I wrote about ‘Voting Rights and Districting.’

Oh, and so that you are reassured that the Kozak plan is in full motion, Consider what Eric Holder has been doing to create the Redistricting debacle that is now facing many states.

Don’t be fooled by the Marxists/Gramsci-ite Congress and State legislators, Voting Rights have been settled. But do watch out for continued electronic corruption with the electronic poll books. Yes, the must be connected to the Internet where as the voting machines to not. Do you trust their encryption?

In 1770 the colonies, especially Massachusetts, was being impacted by Parliaments trade barriers and that the Colonies formed Non-importation agreements to keep out the flow of goods from England. I relate several Sam Adams letters that deal with Commerce to which one can associate to the imposition of the ChicomFlu shutdowns and mandates and then the response of the truckers of Truck’n Liberty.

‘…I believe the general Inclination there is to wish that we may preserve our Liberties; and perhaps even the Ministry could for some Reasons find it in their hearts to be willing that we shd be restord to the State we were in before the passing of the Stamp Act (ChicomFlu), were it not that a Set of detestable Men were continually writing from hence that we shd carry our Claims still higher & there wd be no Bounds to our Demands. I can venture to assure you that there is no Foundation for such Assertions, nor do I think they are really believd by any. The People here are indeed greatly tenacious of their just Rights & I hope in God they will ever firmly maintain them. Every Attempt to enforce the plan of Despotism will certainly irritate them; While they have a Sense of freedom they will oppose the Efforts of Tyranny; and altho the Mother Country (federal and state governments and bureaucracies) may at present boast of her (their) Superiority over them, she (they) may perhaps find the Want of that Superiority, when by repeated provocations she (they) shall have totally lost their Affections.—All Good Men surely wish for a cordial Harmony between the two Countrys (the people and the governing entities). Great Britain (federal and state government) can lose Nothing which she ought to retain by restoring the Americans to their former State, & they I am satisfied will no further contend; While the Struggle continues Manufactures will still increase in America in spite of all Efforts to prevent it; & how far Britain (centralized corporatism) will be injurd by it, ought certainly to be well considerd on your side the Atlantick. Our Merchants have receded from their Nonimportation Agreement.

They held it much longer than I ever thought they would or could. It was a grand Tryal which pressd hard upon their private Interest. But the Landholders find it for their Interest to manufacture and it is their happy Consideration that while they are most effectually serving their Country they are adding to their private fortunes. The representatives of the people have this day agreed to promote Manufactures in their respective Towns, & the House have appointed a special Committee to form a plan for the effectual Encouragement of Arts, Agriculture, Manufactures & Commerce in this province; & even the Administration of a Bernard could not tend more to sharpen the Edge of resentment which will perpetually keep alive the Spirit of Manufactures than that which we are now blessd with. Lt Governor Hutchinson, more plausible indeed than Bernard, seems resolvd to push the same plan & the people plainly see that a Change of Men is not likely to produce a Change of Measures—so soon are the Words of the one verified when he said of the other that he could rely upon him as he could on himself.’

Business cave into government and the Citizenry is hurt by it but they will continue to strive for their God given Liberties.

‘I had received a Letter from Mr John Neufville Chairman of the Committee of Merchants in Charlestown, inclosing Letters for the Sons of Liberty in Boston Connecticutt & N Hampshire. The two last of which I forwarded as soon as possible to such Gentlemen in the repsective places as I judged worthy so excellent a Character. That which was directed for Boston I unsealed, professing my self a Son of Liberty but found it was designed for the Trade, with whom I was not connected, but as an Auxiliary in their Nonimportation Agreement. I therefore delivered it to the Chairman of the Committee here, and it was read with very great Approbation, in a large Meeting of the Body of the people. I desire you would make my Compts and Apology to Mr Neufville. I verily believed that the Committee of Merchants had duly honored his Letter by returning an Answer to it, as they had ordered it to be published in our papers; and I candidly suppose they had the same Expectation from me which may be the occasion that the Letter remained unanswered.

The Nonimportation Agreement since the Defection of New York is entirely at an end. From the Begining I have been apprehensive it would fall short of our Wishes. It was continued much beyond my Expectation: There are here & I suppose every where, men interrested enough to render such a plan abortive. Thro the Influence of the Committee & Tories here, Boston had been made to APPEAR in an odious Light; but I would not have you believe it to be the true Light. The Merchants in general have punctually abode by their Agreement, to their very great private loss; Some few have found means to play a dishonorable Game without Detection, tho the utmost pains have been taken. The Body of the people remained firm till the Merchants receded. I am very sorry that the Agreement was ever entered into as it has turned out ineffectual. Let us then ever forget that there has been such a futile Combination, & awaken our Attention to our first grand object. Let the Colonies still convince their implacable Enemies, that they are united in constitutional Principles, and are resolved they WILL NOT be Slaves; that their Dependance is not upon Merchants or any particular Class of men, no is their dernier resort, a resolution BARELY to withhold Commerce, with a nation that would subject them to despotic Power. Our house of reps[sic] have appointed a Committee to correspond with our friends in the other Colonies, & AMERICAN MANUFACTURES should be the constant Theme.

Our young men seem of late very ambitious of making themselves masters of the art MILITARY.’

I will keep updating these references as the media stories emerge with what I suggest could and would happen in Canada.

Comments Off on Episode 336: Truck’n Liberty and Voting Rights