4-27-19 Did Evangelicalism Lose the Nation? And the EagleFireCloud Soars

This question: “Did Evangelicalism Lose the Nation?” is not new. 1913 was one of the early times that this question was heard. It was asked by J. Gresham Machen in – The Princeton Theological Review, Vol. 11, 1913 article titled, “Christianity & Culture”. Nothing has changed but the reality that Pastors are even less engaged in Culture for the same lame reasons as when this article was written. 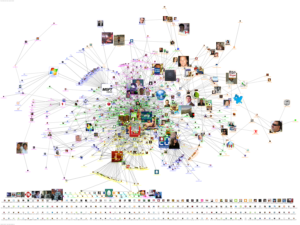 I am also discussing the techno-oligarchs and the book “The Age of Surveillance Capitalism: The Fight For A Human Future at the New Frontier of Power”. I will be providing you with a solution by describing how EagleFire Soars in returning your digital Liberty back to you.

Did Evangelicalism Lose the Nation:

For years I have been observing and talking about the ‘Extensibility of the Gospel’. If one really studies the Bible as the complete revelation of God who is active in every aspect of His Creation, then it would be a simple common sense concept that Christians, real Christians, are to be active in every aspect of His Creation so as to bring it ‘ALL’ under Kingdom authority. Not making it heaven on earth but in having the justice of the Kingdom prevalent in every aspect of creation. Mechen’s article describes this exceptionally well so you will have to read it for yourself so that you get the details of what I cannot communicate in a short program as this.

The reality that Evangelicalism has allowed evil, anti-Christianity and anti-constitutionalism to reign is, in my opinion, a violation of that ‘Extensibility of the Gospel’ that is a part of maturing as a regenerated person under the authority of the Risen King Jesus.

This article “Criminalization of Christianity is on America’s horizon“ is another confirmation of what I’ve been saying. The 1913 article talks about indifference at the Universities which is a line of discussion in this article too. Just a clip from this modern article:

“Claire and Austin weren’t alone. A few thousand signed a Change.org petition calling on the university to rescind its invitation. And that’s when it dawned on me – when the criminalization of Christianity comes to this land (and it is coming), it will be championed by and met with the fanfare of many professing Christians.

The number of supposedly Christian individuals whose moral compasses are calibrated to the spirit of the age rather than the authority of scripture has become astounding. Leaning on their own understanding they choose the attributes of a god they want to worship, one who seems “worthy” of their worship, and they bow to it.  The God of Scripture is too narrow-minded.”

If the pulpits are not directly engaging the congregation with the extensible gospel then Christianity becomes not only tolerant of the culture and apathetic to the evils in every aspect of society, Christianity becomes pathetic as the representative of the Bride of Christ the King who NOW reigns over all creation and eternity.

Most people who use the Internet have a limited to clear sense that they are being used and abused by the techno-oligarchs. You are a commodity being used for profit! How? As the author of the book being reviewed states: “Surveillance capitalism renders human behavior by tracking, measuring, and analyzing from your smartphone to your smart home—from browsing the internet to private messages or emails with a colleague. This relatively new, dominant force intrudes through cookies and privacy permissions that in most cases must be accepted for a service to work properly or at all, including, for example, many smart home security systems.” and “…surveillance capitalism disguises itself in intimidating terms of service agreements and actually nudges your behavior so that you do what it wants in various ways, perpetuating a feedback loop of predatory control and emotional espionage enabled through advanced machine learning and algorithmic programming.”

How does one obviate much of this intrusion into our privacy? I am letting know about the first step solution: EagleFire

is First: to read the full article by Machen referenced below. Then, take the time to understand that if, as a Christian, one is not engaged in bringing God’s sovereignty into all of His creation – then one is culpable in allowing the enemy to reign over that which is already under the foot-stool of the Risen King.

Second, take an honest look at how you enjoy being a digital slave and fully allowing yourself to be under surveillance capitalism, “you do what it wants in various ways, perpetuating a feedback loop of predatory control and emotional espionage enabled through advanced machine learning and algorithmic programming.” I encourage you to get over to EagleFire sooner then later.

2. Harvard professor Shoshana Zuboff’s new book, ‘The Age of Surveillance Capitalism: The Fight For A Human Future at the New Frontier of Power”

Comments Off on 4-27-19 Did Evangelicalism Lose the Nation? And the EagleFireCloud Soars