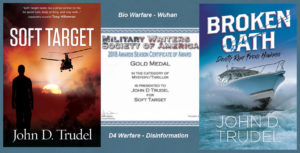 In the midst of everyday life how is the impact of modern Bio and D4 Warfare missed by the ordinary Citizenry? On this program, my friend John Trudel and I will unpack what Bio and D4 (disinformation) Warfare are. We will take a look at this from some personal experiences as well as revisit John’s book “Soft Target.”

John and I have had past conversations on this program as to how predictive his books have been. Our intent is that you join this free flowing conversation about what happened in Wuhan and this aftermath. John will take us through a threat analysis in the manner of the researcher and former technologist spook that he is.

We will engage in a conversation regarding the use of Bio and D4 Warfare by the left. What are some objectives? What about the economy? Most importantly, what happens to Constitutionalism and elections at the state and national level?

In my book “From Covenant To The Present Constitution” I exemplify what taking a Constitutional oath is about. John brings a whole new perspective to a “Broken Oath.” Understand that I spent time in the likes of Venezuela and can attest to many nefarious activities throughout the country. I have first hand insights to many experiences that most American could not imagine. As John and I talk about this new book, the excitement of the setting alone gives me a memory adrenalin shot and the expectation of new insights.

With all of that….. Buckle Up for an engaging program!

As you take the time to read these snippets of the letter consider the present and where the violations of Oath and actions are. When we consider Bio and D4 Warfare, the key is to what is truth and what is ‘disinformation.’  In the end, Remember that YOU are the ultimate sovereigns in our republics (state and federal.) You can put a stop to big government….. If you want to. You must participate even in civil disobedience which is your right and as Sam wrote in 1746, You cannot give your natural rights away without becoming a slave..

[Independent Chronicle, June 4, 1795; a text is in the Massachusetts Archives.]

“The sovereignty of a nation, always of right, resides in the body of the People; and while they have delegated to their freely elected Legislative, the power of exercising that sovereignty in their behalf, the Executive department, as well as the Magistrates who are appointed to render the Constitution efficient by carrying the laws into effect, are no less important to the people. For what avails the making of good and wholesome laws, unless they are duly executed. As the happiness of civil society may in a great measure depend upon a wise and a consistent harmony between the various branches of the Government; a free communication may have a tendency to cultivate and extend the blessings of friendship and good humor.

Indeed our constituents, under whose authority and for whose benefit we are to exercise the functions of our different departments, have a right to expect from us, as their public agents, to avow our principles and intentions, and make them acquainted with the true situation of their public affairs.

In the addresses from the Chair, while it was filled by Royal appointment, uniform attempts were made to strengthen the prerogatives of the Crown, and to bring the people obsequiously at the foot of the Throne, for privileges holden by sufferance: Surely it becomes us, in our happy state of Independence, to turn our attentive minds to the great objects of securing the equal rights of the citizens, and rendering those constitutions which they have voluntarily established, respectable and efficacious.

Our ancestors, when under the greatest hardships and perils, they opened to us the wilderness, they took possession of, and left for us an inheritance, one of the best countries under the sun. Amidst their toil, and fatigue they extended their views, and early laid the foundation of Civil Liberty. Although they had in prospect, the instruction of future youth in all literary science, they considered morality and real goodness of heart, as the great basis upon which the best interests of a nation could be safely laid. Under this idea, they also provided for the institutions of Public Worship, and the support of teachers in Piety, Religion and Morality. The great increase of our numbers & happiness, is a standing witness to the world, of the wisdom of their measures. Oppressed as they were by the supercilious haughtiness of royal prerogative, and considered as a contemptible people at a distance from the favors of the Crown, and the flattering smiles of courtiers, their perseverance has in effect raised us, by the blessing of Providence, to an exalted degree of prosperity and glory. …

The citizens of the Commonwealth have lately had before them a question of the expediency of revising, at this period, the form of our present Constitution. The conduct of the citizens on this occasion, has given full proof, that an enlightened, free and virtuous people, can as a body, be the keepers of their own Liberties, and the guardians of their own rights. On which side soever the question may have been decided, I have the pleasure of being informed that it has been discussed with propriety, calmness and deliberation. If the event should be in favour of a Convention, a future revision may be made at such period as may be most fit and convenient, and there may be opportunity, in the mean time, for the citizens at their leisure, to make their own remarks upon the Constitution, in its operation, and thus prepare themselves for cool deliberation, at another revision. Should the determination be otherwise, I think it will clearly follow, that the citizens are happy under the present Constitution, and that they feel themselves well assured, that if there should be a future necessity for it, they can, in a peaceable and orderly manner, revise, alter and amend it at their pleasure.

A compleat, perfect and permanent system of jurisprudence, is one of the greatest blessings which our country can possess. To have justice administered promptly and without delay, is to gather the best fruits of a free and regular Government. Uncorrupted Juries are an effectual guard against the violations of our rights and property. Having an Executive annually elected, and the Legislative elected as often, the one branch of which is the grand inquest of the Commonwealth, and the other branch to be constituted a Court, as there may be occasion, to try and determine upon impeachments, we may be secured against impartiality in the fountain, and corruption in the streams of justice. The Legislative will examine all the machinery by which the Government acts: TOO frequent speculative experiments may tend to render the motions unsteady, and to annex insecurity to property. Where there are no radical defects, a long exercise of Judicial Authority, in any particular mode, brings the feelings of the people in unison with it, and fixes habits to which they have been accustomed. …

Let us, Fellow Citizens, cultivate a due observance of the Laws which are constitutionally made by the authority of this Government, as well as those of the Federal Government, agreeable to the Constitution of the United States. Let us transmit our Liberties, our Equal Rights, our Laws and our free Republican Constitutions, with their various concomitant blessings, to those who are coming upon the stage of action, and hope in God, that they will be handed down, in purity and energy, to the latest posterity.”