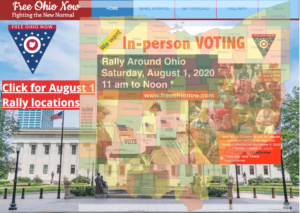 Saturday, August 1st – conversation is with Tom Hach of Free Ohio Now (FON). The Chicom Flu (Covid-19) has more than impacted Ohioans as well as other states. The economy is trashed. Health care lost billions of dollars. Families could not be at the side of their dying loved ones. The general population imprisoned with stay at home orders. Worse, people are muzzled to develop a ‘New Normal.’

What can Ohioans do? For that matter, What is it that Free Ohio Now is doing that every other County can do in all Fifty States? Tom Hach lays out those methods that have been effective in getting the Citizenry engaged. As well as he details opportunities that can be accomplished in every State in the Republic.

What every Ohioan can do on Saturday 8-1 and then again on 8-22 is Rally Around Ohio to send a message to Secretary of State Frank LaRose – “Keep In Person Voting!” (Find your Ohio Location here) The message must secure in person voting on November 3rd. Mail-in balloting cannot be allowed since fraud is obvious with an all mail-in systems. It is our Right to go to the Ballot Box! Support these rallies by getting off of your seat and your feet on the street!

Tom Hach talks about what this is and that Free Ohio Now will have these happening around Ohio starting in September.

In the midst of my research for an article I came across a quote by Adam Ferguson. What interested me as I looked at the writings of Ferguson was that Friedrich Hayek picked up on the concept and wove that into his notion of ‘Spontaneous Order.’ Now I look at the order of the world from the Reformation perspective and particularly from the Puritan worldview. But in relationship to what is going on presently I find that this 18th Century enlightenment humanist does well to articulate the relativism of our present.

The short quote (see longer quote here) sets Hayek’s thinking of ‘spontaneous order’ and not the order for humanity that the Reformation Biblical God has designed:

“Every step and every movement of the multitude, even in what are termed enlightened ages, are made with equal blindness to the future; and nations stumble upon establishments, which are indeed the result of human action, but not the execution of any human design.”

I will argue that from the Anti-federalists position, being the Reformation perspective, that there are ‘designing’ people who have calculate and Machiavellian interests to manipulate and control the general population. In respect to these United states as a Constitutional Republic established through the Declaration of Independence, both Hayek’s and Ferguson’s assumptions completely miss the great sovereignty of God in the affairs of men.

Yet, from the Scottish Enlightenment philosopher Ferguson, we can see his assessment of our present situation with the Fauci’s and the politicizing of the Chicom Flu as:

“MANKIND, when they degenerate, and tend to their ruin, as well as when they improve, and gain real advantages, frequently proceed by slow, and almost insensible steps. If, during ages of activity and vigour, they fill up the measure of national greatness to a height which no human wisdom could at a distance foresee; they actually incur, in ages of relaxation and weakness, many evils which their fears did not suggest, and which, perhaps, they had thought far removed by the tide of success and prosperity.

We have already observed, that where men are remiss or corrupted, the virtue of their leaders, or the good intention of their magistrates, will not always secure them in the possession of political freedom. Implicit submission to any leader, or the uncontrouled exercise of any power, even when it is intended to operate for the good of mankind, may frequently end in the subversion of legal establishments. This fatal revolution, by whatever means it is accomplished, terminates in military government; and this, though the simplest of all governments, is rendered complete by degrees. In the first period of its exercise over men who have acted as members of a free community, it can have only laid the foundation, not completed the fabric, of a despotical policy. The usurper who has possessed, with an army, the centre of a great empire, sees around him, perhaps, the shattered remains of a former constitution ; he may hear the murmurs of a reluctant and unwilling submission ; he may even see danger in the aspect of many, from whose hands he may have wrested the sword, but whose minds he has not subdued, nor reconciled to his power.” SECTION VI. Of the Progress and Termination of Despotism.

Let it be said that Ecclesiastes 1:9 again rings true – There is nothing new under the sun.

A COMMITTEE OF THE TOWN OF BOSTON TO BENJAMIN FRANKLIN.

[MS., Collections of the Massachusetts Historical Society; an incomplete draft is in the Samuel Adams Papers, Lenox Library; the latter text only is in the handwriting of Adams.]

“…We must confess that we are astonished to hear that the Parliament had come to a determination, to admit Garbled extracts from such Letters as may be received from America by Administration and to Conceal the Names of the Persons who may be the Writers of them. This will certainly give great Encouragement to Persons of wicked Intentions to abuse the Nations & injure the Colonies in the grossest manner with Impunity, or even without detection. For a Confirmation hereof we need to recur no further back than a few months, when undoubtedly the Accounts and Letters carried by Mr. Rob[in]son would have been attended with very unhappy if not fatal effects, had not this Town been so attentive as to have Contradicted those false accounts by the depositions of many credible persons under Oath. But it cannot be supposed that a Community will be so Attentive but upon the most Alarming Events: In general Individuals are following their private concerns, while it is to be feared the restless Adversaries are forming the most dangerous Plans or the Ruin of the Reputation of the People, in order to build their own Greatness on the Distruction of their liberties. This Game they have been long playing; and tho’ in some few instances they have had a loosing hand, yet they have commonly managed with such Art, that they have so far succeeded in their Malicious designs as to involve the Nation and the Colonies in Confusion and distress. This it is presumed they never could have accomplished had not these very letters been kept from the view of the Public, with a design perhaps to conceal the falsehood of them the discovery of which would have prevented their having any mischievous effects. This is the Game which we have reason to believe they are now playing; With so much Secrecy as may render it impossible for us fully to detect them on this Side of the Water; How deplorable then must be our Condition, if ample Credit is to be given to their Testimonies against us, by the Government at home, and if the Names of our Accusers are to be kept a profound Secret, and the World is to see only such parts or parcells of their Representations as Persons, who perhaps may be interested in their favor, shall think proper to hold up—Such a Conduct, if allowed, seems to put it into the Power of a Combination of a few designing men to deceive a Nation to its Ruin. The measures which have been taken in Consequence of Intelligence Managed with such secrecy, have already to a very great degree lessened that Mutual Confidence which had ever Subsisted between the Mother Country and the Colonies, and must in the Natural Course of things totally alienate their Affections towards each other and consequently weaken, and in the End destroy the power of the Empire. It is in this extended View of things that our minds are affected—It is from these Apprehensions that we earnestly wish that all communication between the two Countries of a public nature may be unvailed before the public: with the names of the persons who are concerned therein, then and not till then will American affairs be under the direction of honest men, who are never afraid or ashamed of the light. And as we have abudent reason to be jealous that the most mischievous and virulent accounts have been very lately sent to Administration from Castle William where the Commissioners have again retreated for no reason that we can conceive but after their former manner to misrepresent and injure this Town and Province, Province,—we earnestly intreat that you would use your utmost influence to have an Order passed that the whole of the packetts sent by the Commissioners of the Customs and others under the care of one Mr Bacon late an officer of the Customs in Virginia, who took his passage the last week in the Brigantine Lydia Joseph Wood Commander may be laid before his Majesty in Council —…”