Chaplains and Clergy of the Revolution: Chapter 19 – Ezra Stiles 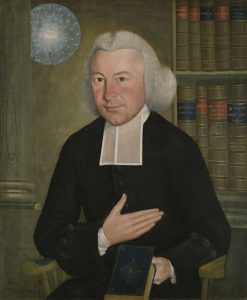 Ezra Stiles continues the depth of living the Extensibility of the Gospel: — His Prophecy respecting the Colonies, in 1760. — President of Yale College. — Chancellor Kent’s Eulogy of him. — His Patriotism. — Keeps a Diary of Revolutionary Events.—His Death..

Ezra Stiles succeeded Dr. Dagget as President of Yale and continued the patriotism regarding what is lost in modern times – Christianity (religion) and fighting tyranny go hand in hand. Hence it can be noted that Ezra Stiles completes ‘the illustrious trio of patriotic Presidents’ that Yale should boast of instead of cowering in socialism and neo-marxism of our present. As a reminder, the trio mentioned are the last two chapters: Dwight and Dagget, and this on Stiles.

Therefore we can easily understand why Ezra Stiles had a capacity to see a coalescence of the colonies into These United States. For that reason his eulogy explained his patriotism as: “resident Stiles’ zeal for civil and religious liberty was kindled at the altar of the English and New England Puritans, and it was animating and vivid.”

Without a doubt we need Pastors, professors as well as institutional leadership as exemplified by Ezra Stiles and his predecessors.

Comments Off on Chaplains and Clergy of the Revolution: Chapter 19 – Ezra Stiles