Chaplains and Clergy of the Revolution: Chapter 21 – James Caldwell 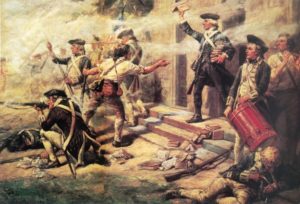 — His Birth and Ancestry. — Personal Appearance. — Power of his Voice. — His Character. — His Congregation at Elizabethtown.— Made Chaplain. — His Toast on the Reception of the Declaration of Independence. — His Activity. — Rewards offered For His Capture. — Removes To Connecticut Farms. — Goes Armed. — His Services — Letter To Lee. — Assistant Commissary General. — Last Interview With His Wife. — Her Murder. — Fight At Springfield. — “Give ’em Watts”. — Murder of Caldwell. — His Funeral. — His Children. — Monument To Him.

James Caldwell exhibits the character of one who understand the persecution of Christianity. Although he was born in America, his “ancestors were Huegenots, who were driven from France to England by religious persecution, from thence to Scotland, and at last to Ireland, from which his father emigrated to this country. Because of this heritage, James Caldwell had a great heart and passion for the resistance of tyranny and the passion for independence.

Furthermore, James Caldwell was seen as a leader not only in the pulpit but also among the army of the day. He was considered amongst the most intelligent, patriotic and men of valor in all of New Jersey. This chapter exhibits each of those traits in this very expressive and emotional narrative.

Notwithstanding the heroism of James Caldwell, he bore a great cost of being the leader before his congregation and the army he was attached to. In the midst of it all his wife was murdered because of him and he too was murdered in the act of his service.

In the end the children of James Caldwell shine as a great legacy to this amazing Patriot Preacher.

Comments Off on Chaplains and Clergy of the Revolution: Chapter 21 – James Caldwell