Chaplains and Clergy of the Revolution: Chapter 22 – Benjamin Trumbull 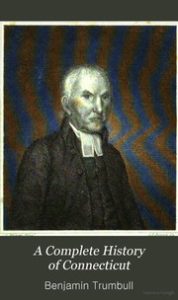 This Chapter regarding Reverend Benjamin Trumbull contains: — His Birth and Education. — Takes Sides with the Colonies. — Enters the Army as Chaplain. —Fights in the Ranks. — Curious Interview with Washington. — Fights at Whiteplains. — Anecdote. —Fights at NewHaven. — Returns to his Parish. — Writes the History of Connecticut. — His Publications.

Benjamin Trumbull was “of a bold spirit and sanguine temperament, a bitter hater of wrong, and a fearless, ardent, and sometimes stormy defender of the right” with “ruddy, determined face and stout figure typified admirably his character.” “Zealous, enthusiastic and able in argument, he brought efficient aid to the patriots, and it is much to be regretted that one who bore so important a part in the Revolution in his native State. After the Revolution, Benjamin Trumbull became so distinguished as its historian, should not have left more details and personal incidents connected with his services in the army. But aside from his general patriotism and zeal very little is known of this part of his history.”

Trumbull was one of the one hundred who performed a delay action in July 1790 when New Haven was being invaded. This was the same battle that Dr. Dagget “the reverend professor of divinity, with his long fowling-piece on the hill-top,” was taking the sniper shots into the advancing army.

As with the previous chapters we see the Pastor taking the leadership in standing before God and in the literal fight for justice against tyranny.

I am reading this book as if to my Grandchildren. My great hope is that parents and Grandparents would do the same. I hope and pray more that Pastors would be in these tumultuous times as the same that these Founding Clergy and Chaplains were.Let us all learn and act according to the Blessing and examples they set for US in our Foundation.

Comments Off on Chaplains and Clergy of the Revolution: Chapter 22 – Benjamin Trumbull