Chaplains and Clergy of the Revolution: Chapter 24 – James Hall 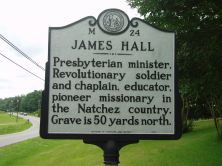 James Hall — His Birth and Education. — Settled int North Carolina. — Rouses His People to oppose the Mother Country. — Is made Captain of a Company of Cavalry. — Acts also as Chaplain. — Marches to South Carolina. — Offered the Commission of Brigadier General by Greene. — Declines. — His After Life.

Reverend Hall is another Pastor who lead from the Front. He was thirty-one when he entered college under the tutelage of Dr. John Witherspoon. Dr. Witherspoon recognized his great mathematical skill and want to keep Hall on as a teacher at the university. But Hall understood his call from God to preach.

In addition to being a leader in the pulpit he fully understood the Biblical perspective of standing against tyranny. With that in mind, James Hall “took the lead in all public meetings held to discuss the political topics of the day. He denounced toryism unsparingly, and on every occasion when he could get a hearing made eloquent and earnest appeals in behalf of freedom.”

And while the war was far away he engaged in his flocks in prayer yet, when the war was on the front door, reeling with atrocities, Reverend Hall “at once called together his flock, and after relating some of the bloody acts that had been committed by the invaders, besought them, in the name of their distracted country, and for the sake of their friends and neighbors who were hewn down by their merciless foes, to take up arms in their defence.” At this point he was made Captain of the Calvary which were comprised of his parishioners as well as Chaplain over the same.

To sum it up, James Hall was a lead for the Kingdom of Jesus and a Patriot warrior for standing against tyranny and evil.

Comments Off on Chaplains and Clergy of the Revolution: Chapter 24 – James Hall