Chaplains and Clergy of the Revolution: Chapter 23 – Samuel Kirkland 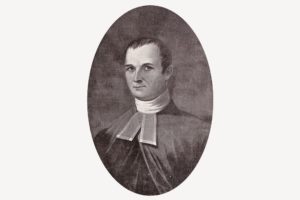 Samuel Kirkland has an amazing life: — His Birth and Education. — A Teacher in Dr. Wheellock’s School. — Goes a Missionary to the Indians of New York State. — His Labors and Perils. — His Mission broken up by the Revolution. —Employed by Congress to Keep the Indians from joining the British. — Prevented by Brandt. — Chaplain in Sullivan’s Brigade. — Accompanies it to Genesee Flats. — Services rewarded by Congress. — Settles among the Oneidas after the War. — Founds Hamilton College. — Is thrown from his Horse. — His Death.

We are now halfway through the book with this chapter about Samuel Kirkland . This amazing missionary Pastor is most well known for his great work among the Indian tribes in New York. He wandered the wilderness of New York armed only with his Bible. He learned every aspect of customs, language and locations of the various Indian Tribes.

Samuel Kirkland maintained his missionary work until the drums of the Revolution “broke up his mission”. He was commissioned by the Continental Congress to work with the various Indian Nations to side with the Patriots and Not Great Britain. His efforts were dashed with the “Six Nations”.

This chapter about Samuel Kirkland has a descriptive emotional adventurism that exemplifies the pain in Patriotism and the rewards of Liberty.

Comments Off on Chaplains and Clergy of the Revolution: Chapter 23 – Samuel Kirkland