Chaplains and Clergy of the Revolution: Chapter 26 – Charles Cummings 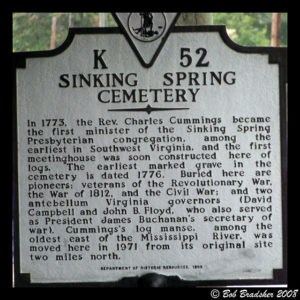 Charles Cummings was distinguished as: — An Irishman by Birth. — Settles in Virginia. — Esters the Ministry. — Fights the Indians. — Goes armed to his Church. — Takes the Lead in the political Movements of the People. — Chaplain to the Army in the Expedition against the Cherokees. — His Death.

Charles Cummings came to America as a young man. He became a minister and lived at the very edge of danger. He was a leader and fighter both for glory of God and the birth of a new nation.

“He took a leading part in all patriotic movements of his congregation” and was appointed to “to draw up an address to the Continental Congress.” He was also elected the Chairman of the Committee on Safety. This means he ensured the citizens knew how to defend themselves against all threats.

He was a frontiersman who looked at all dangers with the full understanding that God is Sovereign and it is the responsibility of Pastors to lead in every aspect of the concerns of the world as well as spiritual.

Comments Off on Chaplains and Clergy of the Revolution: Chapter 26 – Charles Cummings