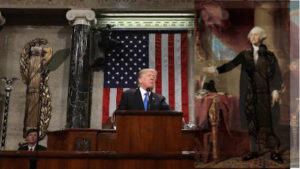 This program begins with a reflection on the morality and virtue as taught by the Clergy of the American Revolution. In the referenced PDF below, George Washington’s Farewell Address, the reference to personal and national morality and virtue is more than a suggestion. Washington fundamentally insist that they be a focus of society for our happiness and good governance.

Unlike the majority of pastors and church leaders in the present, the Founding Clergy (for the most part) had real Chutzpah! It is clear from The Chaplains and Clergy of the Revolution that pastors should lead the fight for morality, virtue and yes – political security of Liberty. The likes of a strong Scotsman, John Witherspoon, had the most flagrant boldness of many Pastors/Theologians/University Presidents/Political Leaders of the day. {Read Chapter 28 in the book}

Yes, what we saw on Tuesday night is that President Trump has that very same Chutzpah!

This week I will begin the discussion on the reflection of core Principles in George Washington’s Farewell Address and the 2019 SOTU Address. The parallels here are not exactly word for word yet if one did what Washington recommended that, “But a solicitude for your welfare, which cannot end but with my life, and the apprehension of danger, natural to that solicitude, urge me, on an occasion like the present, to offer to your solemn contemplation, and to recommend to your frequent review, some sentiments which are the result of much reflection, of no inconsiderable observation, and which appear to me all-important to the permanency of your felicity as a people.”

He wanted us to look upon his Farewell Address as guide of Principles that should be taught in schools and in the Biblical churches.

Warning of Covert and Insidious Attack:

President Trump boldly said that we would not become a ‘socialist’ country. In fact, George Washington warned that “it is easy to foresee that, from different causes and from different quarters, much pains will be taken, many artifices employed to weaken in your minds the conviction of this truth; as this is the point in your political fortress against which the batteries of internal and external enemies will be most constantly and actively (though often covertly and insidiously) directed, it is of infinite moment that you should properly estimate the immense value of your national union to your collective and individual happiness…”

It is obvious to see that the internal enemies have covertly and insidiously penetrated into the very Halls of Congress. In this present day, President Trump echos the Principles of George Washington to challenge the artifices employed to weaken the minds of the American People.

is to Read and Study George Washington’s Farewell Address!