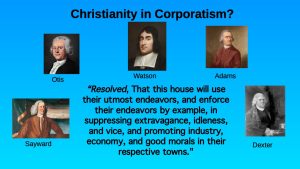 Videos available at Rumble or Brighteon

Is there Christianity in Corporatism? I am using the broad definition of Corporatism here: ‘the control of a state or organization by large interest groups.’ Can Christianity be the active morality in state or organizational, including corporate business, ethics? Who is determining business ethics at the corporate level and at the small/medium business level? What about the responsibility of every person who is in leadership or management? Are you not, by the classical definition, a magistrate? That being true, Are you not responsible before God for the moral determination of all persons and ethical decisions that are in your managerial realm?

Therefore, is it not true that the elected, the bureaucrats, corporate executives and managers, business owners, middle managers and so on, have a responsibility to uphold true and faithful righteousness and morality (period).

One present Example of No Moral leadership in Corporatism:

‘Yale Law School Associate Dean Ellen Cosgrove was present the entire time, but did not confront any of the students, despite their actions violating the school’s free speech policies, the Free Beacon notes.’

This week I don’t hold back the full charge of Reformed Biblical truth regarding ‘taking the Kingdom by storm’. I take us through a quick survey of Foundational ethics and morality in governance, be it a governing entity, educational system or business related to economy as well as liberty. My Foundational references are, of course Samuel Adams, but I also look at a couple of the other founders and pastors that influenced the American Puritan work ethic.

I am hitting it hard from the work by Thomas Watson, ‘The Christian Soldier Or Heaven Taken By Storm.’ Grab the saddle horn because Watson shakes the very core of your being with truth. If this does not affect how you will be a leader in your family, work and even in the executive/corporate wheelhouse, then you are allowing the present evil.

I was reading a book written by a modern Reformed minded pastor, ‘Against The Church,’ that called my attention back to Thomas Watson.

I dug back into my Reformer / Puritan library on Watson and the book ‘The Christian Soldier, or Heaven Taken By Storm, shewing the Holy Violence a Christian is to Put Forth in the Pursuit After Glory’ jumped out as appropriate for this week. It is quit a read at 225 pages but the application of truth is formidable for our present time.

Let me begin with with a quote from ‘The Publisher’s Preface’ regarding Thomas Watson and this particular work.

‘In this little work, it is readily confessed, that there are some expressions, which may be construed to manifest a particular enmity to a certain sect. If any should think so, let them remember the words of the Apostles, Acts v. 29. We ought to obey God rather than man; and like the apostles, our author’s care seems to have been, to set the fear of his Creator constantly before him; and in what he delivered from the pulpit, or issued from the press, to be much more anxious to gain over souls to the kingdom of Heaven, by promulgation of serious and important truths, than to tickle his readers and hearers, by the delicate and fashionable mode now in use, of what is called elegant composition, and highly finished periods. He was the zealous and faithful servant of his Lord; and in the performance of the sacred duties enjoined upon him by virtue of his office, he cared little or nothing about what men might do unto him, or say concerning him.’

What I would like to emphasize here is that as I discussed in the last couple of programs, pastors are not trusted very much now a days; well, that would be because they ‘tickle’ readers and hearers ‘by the delicate and fashionable mode now in use, of what is called elegant composition, and highly finished periods.’ It might be that we would experience a different people and nation if the candor of Thomas Watson was in the majority of pulpits in these United States. From the application of the Truth Watson preached, all would act with Christian Courage and Piety such that every realm of humanity would be shaken by the totality of the Gospel.

The foundational premise here is to ‘Set the Creator constantly before us.’ Can you look our Creator in the eyes and tell Him that you are fighting for the Kingdom of Heaven in every aspect of your life? Can you Resolve like Otis, Adams, Dexter, and Sayward below that you will ‘suppress extravagance, idleness, and vice, and promote industry, economy, and good morals in their respective towns?’

I wonder who will have the political will to do so?

Congratulations and Great Job to those that fight for the Gospel Kingdom in every sense of being a Christian Soldier.

Concerning the actions by the Massachusetts Legislature in March of 1768:

‘Towards the close of the session, a committee, consisting of Otis, Adams, Dexter, and Sayward, reported a series of resolutions for the encouragement of manufactures in the Province, which were carried by the vote of all except Timothy Ruggles, a stanch loyalist, who generally voted against the measures of the patriots.

“Resolved, That this house will use their utmost endeavors, and enforce their endeavors by example, in suppressing extravagance, idleness, and vice, and promoting industry, economy, and good morals in their respective towns.”

” And in order to prevent the unnecessary exportation of money, of which the Province has of late been so much drained, it is further resolved, that this House will, by all prudent means, endeavor to discountenance the use of foreign superfluities, and to encourage the manufactures of this Province.”

After the House had passed a resolution requesting the executive to appoint a day of fasting and prayer throughout the Province, the Governor prorogued the Legislature with a speech, in which he discovered his hatred of the leading members. Referring to Shelburne’s letter, he says :—

“Prudent men, moderate men, would have considered it as an admonition rather than a censure, and would have made use of it as a means of reconciliation rather than of farther distraction. But there are men to whose being (I mean the being of their importance) everlasting contention is necessary. ‘And by these has this letter been dragged into public …. Time, and experience will soon pull the mask off those false patriots who are sacrificing their country to the gratification of their own passions I shall defend this injured country from the imputations which are cast upon it, and the evils which threaten it, arising from the machinations of a few, very few, discontented men.”

Such was the royal Governor’s estimate of those who considered themselves the keepers of the public liberties, and as holding them in sacred trust for the millions of posterity. He continued his importunities for troops; and the crown officers availed themselves of the anniversary of the repeal of the Stamp Act, March 18th, to invent new libels against the people. As they spread reports of an intended insurrection on that day, the Sons of Liberty were the more determined to preserve order. Rioting had been unknown since the repeal of the Act. Passive resistance as yet was the policy, as exemplified in the meeting of the merchants on the day on which the Court was prorogued, when they had renounced by subscription their commerce with England, and invited the merchants of the whole continent to join them.’

1. 1816 facsimile of Thomas Watson’s ‘The Christian Soldier Or Heaven Taken By Storm’

2. the Thomas Watson Reading Room: From The Christian Soldier, or Heaven Taken by Storm

4. The Economists of the Reformation: An Overview of Reformation Teaching Concerning Work, Wealth, and Interest by David H. Eaton

Comments Off on Episode 340: Christianity in Corporatism?