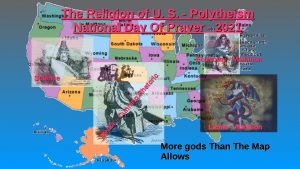 This weeks program discusses the 2021 National Day of Prayer – Polytheism then on to the definition of Patriotism – Are you one and then the contrast of the ‘resident’ O’biden’s Proclamation and Samuel Adams February 19, 1794 Proclamation as Lt. Governor, which is below in the Sam Adams Wisdom section.

Hot off the White House Briefing Room: The National Day of Prayer is polytheistic – Quote with emphasis added:

‘Throughout our history, Americans of many religions and belief systems have turned to prayer for strength, hope, and guidance. Prayer has nourished countless souls and powered moral movements — including essential fights against racial injustice, child labor, and infringement on the rights of disabled Americans. Prayer is also a daily practice for many, whether it is to ask for help or strength, or to give thanks over blessings bestowed.’

And remember the debate on the U. S. House floor regarding the so called ‘equality act’ where Representative Nadler rebuked Representative Steube for reading Scripture during the debate? Nadler stated:

“Mr. Steube,” he said pointedly, “what any religious tradition describes as God’s will is no concern of this Congress.“

We have watched and allowed the enemies of God to become the political, educational and religious leaders in these United States. As described in ‘The Discreet Charm of Polytheism’ November 9, 2014 By Jessa Crispin:

‘For a while, we believed in monotheism. Our God was a jealous God, so it became important to proselytize and convert others who did not believe. It was crucial, we thought, that the entire world share our one, jealous God. Our God was our one observer and judge, our only source of consolation and assistance. Because there was only the one God who stood between us and either eternal life or eternal torment, we were given a list of rules about what exactly our God wanted from us. It became important not only that we obeyed these rules, but also that all of humanity obeyed them. But this, too, turned out to be wrong, and so things changed.

Now we believe in science. We believe that the universe is knowable, and that our understanding of it is attained through empirical observation, logic, and rational thought. We believe that we are here by accident, by a series of causes and effects. One day we will know and understand the original cause and the final effect.

And we are totally sure we have it right this time.’

So now, we have the ‘god’ Fouci with his priests at the CDC and the various States Health Department directors instantiating the rituals of muzzling/masking and being shot…vaccinated. And yes there are those other ‘gods’ and their priests with congregants: ‘abortion.’ ‘critical race theory,’ ‘climate change,’ ‘revisionism via 1619 project,’ ‘cancel culture,’ ‘no-gender gender-phobia’ to list the top few.

I have to ask One primary question: Where are the Pulpits?

See the definition of Polytheism in the References.

‘Weber’s theory suggests a religious sociology, one that applies to modern science as much as it does to pre-modern monotheisms, to political leaders of nation-states and professionals as much as priests and other kinds of religious specialists. If we take Weber’s god-talk seriously, institutional theory becomes a genre of comparative religions. I want to take up Max Weber’s institutional polytheism as an exercise in religious sociology and a potential resource for a theory of institutional logic.’ from: The Gods of Institutional Life: Weber’s Value Spheres and the Practice of Polytheism By Roger Friedland

‘Perhaps the most striking fact about polytheism is its appearance in more advanced cultures only.’ From Werblowsky, R. “Polytheism.” Encyclopedia of Religion. . Encyclopedia.com. 15 Apr. 2021 <https://www.encyclopedia.com>.

For this week, the engagement needs to be with the leadership in your churches. If the elders, deacons and pastors are not standing against the tyranny and despotism of our present time, then it is incumbent on you and other members to have that full conversation with them.

I would caution you to have all your understanding and documentation in proper order and that you speak to them in firm love for the Kingdom. Jesus is sovereign over all, Matt 28:18 ‘And Jesus came and spake unto them, saying, All power is given unto me in heaven and in earth.’

[Independent Chronicle, March 6, 1794 , No. 3764 of the Leffingwell sale appears to have been a manuscript of this text.]

BY HIS HONOR SAMUEL ADAMS, ESQ, LIEUTENANT-GOVERNOR AND COMMANDER IN CHIEF OF THE COMMONWEALTH OF MASSACHUSETTS

A PROCLAMATION FOR A DAY OF PUBLIC FASTING, HUMILIATION, AND PRAYER.

IT having been the invariable practice from time to time when our pious and renowned ancestors took possession of this land, at the approaching season of the year, to set apart a day publickly to acknowledge an entire dependence on the Father of all Mercies for every needful blessing, and to express sorrow and repenntace for the manifold transgressions of His Holy Laws: And the Practice being highly becoming all people, especially those who profess the Christian Religion:

I HAVE thought fit, by, and with the advice of the Council to appoint THURSDAY, the Seventeenth day of APRIL next, to be observed throughout this Commonwealth, as a day of PUBLIC FASTING, HUMILIATION and PRAYER; earnestly exhorting the Ministers of Religion to assemble with their respective Congregations on the same day—that deeply lamenting our ingratitude to our Heavenly Father, to whom we are under all possible obligations, and our many deviations from those right and safe Paths, into which, as our Supreme Governor, HE hath plainly directed us, we may with one heart and voice humbly implore His gracious and free pardon, thro’ JESUS CHRIST, supplicating His Divine aid that we may become a reformed and happy people. At the same time humbly beseeching HIM, mercifully to regard our lives and health, so that no infectious and mortal distemper may prevail amongst us: To favour our land with the alternate benefits of rain and warmth of the Sun; and that our hopes of a plentiful harvest may not be disappointed by devouring insects, or any other calamity:—To prosper our trade and fishery, and the labor of our hands:—To protect our navigation from the rapacious hands of invaders and robbers on the seas, and graciously to open a door of deliverance to our fellow-citizens in cruel captivity in a land of Barbarians:—To continue and confirm our civil and religious liberties; and for that great purpose to bless and direct our great University, and all Seminaries and Schools of education:— To guide and succeed the Councils of our Federal Government, as well as those of the several States in the Union, that under their respective Constitutions they may be led to such decisions as will establish the liberty, peace, safety, and honor of our country:— To inspire our friends and allies, the Republic of France, with a spirit of wisdom and true religion, that relying on the strength of HIS Almighty Arm, they may still go on prosperously till their arduous conflict for a government of their own, founded on the just and equal rights of men, shall be finally crowned with success:—And above all, to cause the Religion of JESUS CHRIST, in its true spirit, to spread far and wide, till the whole earth shall be filled with HIS glory.

And I do earnestly commend that all unnecessary labor and recreation be suspended on said day. GIVEN at the Council-Chamber, in Boston, the Nineteenth day of February in the year of our LORD, One Thousand Seven Hundred and Ninety-Four, and in the Eighteenth Year of the Independence of the United States of America.

By His Honor’s command, with the advice and consent of the Council,

GOD save the Commonwealth of Massachusetts.

1. Polytheism or Don Stewart – What Is Polytheism? Or

3. A Modern Polytheism? Nietzsche and James by Jordan Rodgers

4. American Polytheism (Or, The [G]ods We Serve) – Posted by Scott A Martin in Culture, Philosophy, Theology

5. For the 1828 definitions of ‘Model’ and ‘Patriot – Patriotism’ See the posting of this program at the Samuel Adams Returns web site.

Rough examples of Polytheism is culture:

6. A pattern; any thing to be imitated. Take Cicero, lord Chatham or Burke, as a model of eloquence; take Washington as a model of prudence, integrity and patriotism; above all, let Christ be the mode of our benevolence, humility, obedience and patience.

PATRIOT, n. [Fr. patriote, from L. patria, ones native country, from pater, father.] A person who loves his country, and zealously supports and defends it and its interests.

‘Such tears as patriots shed for dying laws.’ by Pope.

PATRIOT, a. Patriotic; devoted to the welfare of one’s country; as patriot zeal. !

PATRIOTISM, 11. Love of one’s country; the passion which aims to serve one’s country, either in defending it from invasion, or protecting its rights and maintaining its laws and institutions in vigor and purity. Patriotism is the characteristic of a good citizen, the noblest passion that animates a man in the character of a citizen.

Comments Off on Episode 300: Polytheism the Official United States Religion