Episode 319: Ohio Businesses, A How To Survive Government Intrusion

Ohio Businesses, A How To Survive Government Intrusion 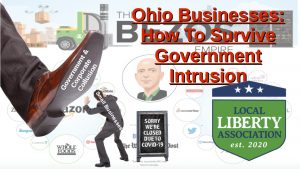 You can watch the Video on Rumble By Clicking Here.

I did this program with Ohio Businesses that were affected by the dictates of Governor DeWine. I went to the Planted Flag Brewing Company and interviewed the owner as well as a couple other business owners who are members of the Local Liberty Association.

I want to focus this program on what you can do to support Local Liberty minded businesses or if you are a Local Liberty Business then you should join this association or one like it in your State.

First off, I want to thank Aaron and Karen Wirtz, the owners of Planted Flag Brewing for allowing us to do the program at their place of business. They are career Air Force Veterans who have put the stake in the ground to stand for liberty in their local community.

As we discuss Ohio Businesses, there is something that Aaron says that is the foundation to all that this program is about. As Aaron is describing the intrusions of government into small businesses he also defines why we have the Right to property, which is our businesses, that being ‘we are made in the image of God.’

Sadly the bureaucrats and politicians do not recognize what defines personal property in the way Aaron describes it. Not only that, the bureaucrats and politicians do not understand the consequences of violating their ‘Oath’ to uphold the Constitutions of their State, in our instance being Ohio, as well as the Federal. They either forgot or do not care that they have sworn before the highest sovereign of all, God, that they will execute their ‘Oath’ with all care for the Liberties of the Citizens.

What we have seen is that the bureaucrats in particular have become demi-gods. What you will learn on this program is that there are Ohio businesses that will not cow-tow to tyranny.

As much as many small business that stood their ground against the tyranny of the ChicomFlu shutdowns, many privately owned companies of all sizes had to or gave into taking the financial relieve of Paycheck Protection Program (PPP) funds during the pandemic to keep its workers on payroll. Not only has PPP become a millstone around the necks of small businesses for reasons like this Article: The Labor Shortage Isn’t Just Closing Small Businesses, But Shattering Entire Retirement Plans but is is having other long term negative affects on the whole financial system and the mindset of those who rather flip burgers than learn and work in skilled labor.

Small businesses are most often Personal Property. Oh what a subtle way to effect the destruction of personal property and bolster the corporatist1 world. Check out the Side Note references if you want to travel this rabbit hole.

1Corporatism – the organization of a society into industrial and professional corporations serving as organs of political representation and exercising control over persons and activities within their jurisdiction. Citation: “Corporatism.” Merriam-Webster.com Dictionary, Merriam-Webster, https://www.merriam-webster.com/dictionary/corporatism. Accessed 24 Sep. 2021.

How To Survive Government Intrusion

This program is not just about the Ohio Businesses that are standing their ground for Liberty but also a call to every liberty minded business to develop the associations across the nation to do the same. As you listen or watch the first two segments in particular there is a common resonating theme, Faith in the God of the Scriptures.

Keeping this short, your personal faith in the Biblical God of Reformation truth is the only way to survive government intrusion in our personal lives as well as business. I will be bring more on this but you must clearly understand that like during out Founders time, the oligarchs, the global business leaders and the political class have lost their perspective on sovereignty. The Constitutional sovereignty of each Citizen is only as good as one understands the greater sovereignty of the God of the Bible.

Our political and worse, business, leaders have forgotten and rejected the sovereignty of God. Therefore, they have become and are the same tyrants and despots that the Founding Fathers of the original thirteen Colonies turned to independent republics, states, faced in the 1700’s.

With that, like Aaron, Karen and David and Daniel who spoke with me, Plant Your Flag. Stand your ground as individuals created in the image of God. Recognize your Liberty in what He gave to us in our State(s) and Federal Constitutions so that you can survive government intrusion.

I invited any and all political candidates to join the discussion on Ohio Business affected by Governor DeWine’s orders and mandates. The only on that showed up was a businessman. An owner of a non-profit who was directly affected by the state and federal actions regarding the ChicomFlu.

Jonah Schulz joins me in the third segment to discuss how his non-profit is affected by all that occurred over the last eighteen months. Yet what grabs my attention and should yours is what he has to say about the effects of the mandates, shut downs and tyrannical policies on children.

Since Jonah showed up not only as an Ohio business member, but also as a candidate for Congress, I gave him some time to discuss his campaign. I ask a couple of pointed questions relating to personal Liberty under the Ohio Constitution and then let him explain how he will overcomer the Trump endorsement of his primary opponent.

I am part of a team developing a course on the Ohio Constitution. This course is as the national project by the Institute On The Constitution to ensure that there is a solid lecture series for each State.

I embrace the opportunity which now offers of writing a few Lines to you. In my last I told you I had many things to say particularly concerning A L & S D Esqrs1. If I could have the Pleasure of sitting with you by a fire Side, I would more freely open my Mind to you than I chuse to do upon Paper, considering the Risque of its falling into wrong hands. One of these gentlemen, as I was informd in the year 74 by some who were well acquainted with him, was of a dubious political Character, and was appointed a Delegate in Congress by a Majority of only one of the Electors; it being thought that his own Vote turnd it in his favor. In 75 he was again elected; and he very early attachd him self to Men of different Sentiments from those which most if not all your Delegates brought with them from your Country & strenuously maintained. This Difference of Sentiment was said to arise from local Attachments, but in Reality they arose from different Principles & Views. What Mr Ds political Principles were if he had any I never could learn. His Views always appeard to me commercial & interrested. Whether I was mistaken or not Time perhaps will soon discover. He was very little known in America till the year 75, if at all in Europe.

The other took an early, decided and active Part in Support of the great Cause. In London he had a great Share in the open Opposition made to the Tyranny of the British Court & their Measures respecting America. There he turnd his Attention from the Practice of Physick to which he had been regularly educated in Edinburgh, to the Study of the Law. This he did by the Advice of some of the most able Advocates for the Liberties of America, from an Opinion they had conceivd of his promising Usefulness to that Cause in that Way. He answerd their Prospects. He constantly aided your Agent the late Mr De Berdt2 to whom his Knowledge of Affairs renderd his Services essential. That his Pen was employd for America in General, his Junius Americanus abundantly testifies; and that, and his other Publications witness his Attachments to Massachusetts Bay & South Carolina in particular. His private Letters to his Friends are written with that Freedom as well as Zeal which would have exposd him to the Risque even of his Life from the Resentment of an unprincipled & nefarious Court, if any of them by Accident or Design had fallen into their Hands. This I know to be true. I must conclude at present with giving it to you as my fix’d Opinion, founded on particular observations, that there is a joynt Combination of political & commercial Men to exclude all vigilant Patriots from publick Councils & Employments knowing that Vigilance & unimpeachd, unsuspected Fidelity will be an effectual Bar to the carrying such politico commercial Plans into Execution. I will write to you again by the first good Opportunity. In the mean time I am with perfect Esteem,

Links to Planted Flag Brewing and the Local Liberty Association embedded here and the body of the posting.

1. I dislike Brookings Institute but it is a reference: Debunking myths about COVID-19 relief’s ‘unemployment insurance on steroids’

3. Paycheck Protection Program Loans—The Good, The Bad, And The Ugly

4. A closer look at the paycheck protection program: Nagpurnanand Prabhala, an expert in corporate finance, examines the small business loan program and its effects on company value

5. *** A high value report – Did the Paycheck Protection Program Have Negative Side Effects

6. How the CARES Act and PPP loans impact business valuations

7. How are PPP Loans Handled When Buying or Selling a Business?

1. Truth, are you ready for it? I am serious, are you really ready for Truth. Then Listen and Follow what is not going to tickle your ears but will be Truth. My biggest question is, Can you completely live according to Truth? – A Torrent of Truth, or, What We Actually Believe

3. This is an Echo to what Doug Wilson comments on in topic #1 just above: The False Allure of the Pagan Right by Daniel j. Mahoney

4. How is it that they get away with their evils: Black Lives Matter Is Threatening An ‘Uprising’ Against ‘Racist’ Vaccine Mandates

5. Report: Federal Authorities Releasing Thousands Of Illegal Aliens Into US

8. For Auto Makers, the Chip Famine Will Persist

*** Lastly for some major encouragement regarding our winning: The Prophecy of Micah #7 | Douglas Wilson

Comments Off on Episode 319: Ohio Businesses, A How To Survive Government Intrusion