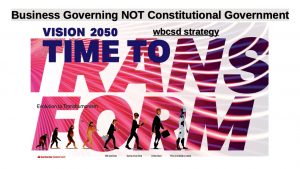 This topic of Business Governing Not Constitutional Government is difficult to really grasp but it is more evident now with the ChicomFlu as the catalyst then ever before.

This weeks program is a precursor to next week where I will be at be at Planted Flag Brewing in Medina Ohio to discuss what Governor DeWine and his ChicomFlu dictates have done to personal liberty and personal property which are the formula for small business.

I know that many pundits, end of days patriots and evangelicals look at the U. N. and political entities as the destroyers of our Foundational Constitutionalism and Federal Republics of these United States but….. I have seen it differently for years and now – the ChicomFlu with the ‘New Green Deal’ economy of Comrade Obiden has pulled back the curtain of Oz.

I revealed the wbcsd last week. This week I delve into the intent of these 200 plus global businesses that are moving swiftly to fulfill their vision ‘to accelerate the transition to a sustainable world’ by 2050 via ‘Our vision is to create a world where more than 9 billion people are all living well and within the boundaries of our planet.’

I will take you through their accomplishments and further intents. Their links are in the references below.

I take you into the concept of Transhuman not as we are hearing from those arguing about the ChicomFlu vax but as one who was in the high-performance computing and telecommunications world. I knew about this effort in transhuman studies and experiments decades ago as I read books and articles by Ray Kurzweilai.

Now, the techno-oligarchs and sillycon valley high-priests of the religions of globalism and environmentalism are using the pandemic scare crisis to run their experimentation into their reality. Just something to think about.

Check out the article on Transhuman in the references. Yes, the Matrix.

Just a side note, you can reason for yourself how they wbcsd is looking at this concept as a mechanism in fulfilling their greater objectives in a sustainable world. Ponder these statements from the wbcsd as they dictate policy to governments:

Policy brief: driving the transition to a circular economy – 7 September 2021: ‘WBCSD’s Vision 2050 report identifies the circular economy as a key lever in achieving a world where nine billion people live well within planetary boundaries while contributing to global agendas such as the Paris Agreement and the Sustainable Development Goals (SDGs). The latest science highlights that the circular economy can reduce global greenhouse gas (GHG) emissions by up to 39% by 2032 and mitigate biodiversity loss.

Now is the time for ambitious actions and scaling the circular economy will be a collective effort. And, while our Vision 2050 report provides detailed action areas for business to leverage circular opportunities, governments must raise the ambition to facilitate this transition.

What We Do page ‘WBCSD builds impactful coalitions and networks that:

These, in turn, allow members to accelerate the transformation of major economic systems, in line with Sustainable Development Goals, the Paris Climate Agreement and Vision 2050.’

Ok, enough for now. Listen to the program on LWRN.net or the podcast/video at Samueladamsreturns.net

Keeping this in front of you – New Web Page – States Constitutions

To fight the likes of the wbcsd at the local and state level you Must know your rights, that which is God given and secured in your States Constitution.

More than ever, with the O’biden administration in full dictatorial mode regarding ‘experimental shot’ mandates and the National Archives Slaps ‘Harmful Content’ Warning On Constitution, All Other Founding Documents, You NEED this resource to fight for your God given Rights at the State level.

‘… I believe the general Inclination there is to wish that we may preserve our Liberties; and perhaps even the Ministry could for some Reasons find it in their hearts to be willing that we shd be restord to the State we were in before the passing of the Stamp Act, were it not that a Set of detestable Men were continually writing from hence that we shd carry our Claims still higher & there wd be no Bounds to our Demands. I can venture to assure you that there is no Foundation for such Assertions, nor do I think they are really believd by any. The People here are indeed greatly tenacious of their just Rights & I hope in God they will ever firmly maintain them. Every Attempt to enforce the plan of Despotism will certainly irritate them; While they have a Sense of freedom they will oppose the Efforts of Tyranny; and altho the Mother Country may at present boast of her Superiority ove them, she may perhaps find the Want of that Superiority, when by repeated provocations she shall have totally lost their Affections.—All Good Men surely wish for a cordial Harmony between the two Countrys. Great Britain can lose Nothing which she ought to retain by restoring the Americans to their former State, & they I am satisfied will no further contend; While the Struggle continues Manufactures will still increase in America in spite of all Efforts to prevent it; & how far Britain will be injurd by it, ought certainly to be well considerd on your side the Atlantick.

Our Merchants have receded from their Nonimportation Agreement. They held it much longer than I ever thought they would or could. It was a grand Tryal which pressd hard upon their private Interest. But the Landholders find it for their Interest to manufacture and it is their happy Consideration that while they are most effectually serving their Country they are adding to their private fortunes. The representatives of the people have this day agreed to promote Manufactures in their respective Towns, & the House have appointed a special Committee to form a plan for the effectual Encouragement of Arts, Agriculture, Manufactures & Commerce in this province; & even the Administration of a Bernard could not tend more to sharpen the Edge of resentment which will perpetually keep alive the Spirit of Manufactures than that which we are now blessd with. Lt Governor Hutchinson, more plausible indeed than Bernard, seems resolvd to push the same plan & the people plainly see that a Change of Men is not likely to produce a Change of Measures—so soon are the Words of the one verified when he said of the other that he could rely upon him as he could on himself…’

‘…The Nonimportation Agreemt since the Defection of New York is entirely at an end. From the Begining I have been apprehensive it wd fall short of our Wishes. It was continued much beyond my Expectation: There are here & I suppose every where, men interrested enough to render such a plan abortive. Thro the Influence of the Come (committee) & Tories here, Boston had been made to APPEAR in an odious Light; but I wd not have you believe it to be the true Light. The Merchts (merchants) in general have punctually abode by their Agreemt, to their very great private loss; Some few have found means to play a dishonorable Game without Detection, tho the utmost pains have been taken. The Body of the people remaind firm till the Merchts (merchants) receded. I am very sorry that the Agreemt was ever enterd into as it has turnd out ineffectual. Let us then ever forget that there has been such a futile Combination, & awaken our Attention to our first grand object. Let the Colonies still convince their implacable Enemies, that they are united in constitutional Principles, and are resolvd they WILL NOT be Slaves; that their Dependance is not upon Merchts or any particular Class of men, nor is their dernier resort, a resolution BARELY to withhold Commerce, with a nation that wd subject them to despotic Power. Our house of reps[sic] have appointed a Come (committee) to correspond with our friends in the other Colonies, & AMERICAN MANUFACTURES shd be the constant Theme.’

8. Conservative Economy an Alternative to Amazon

9. College Professor Says She’s ‘Disturbed’ By How Many White Men Still Talk About 9/11

10. When Diktats and Conscience Conflict

“It is beyond controversy among all good men, that if the persons in authority command any thing contrary to Natural Law or the Divine Precepts, it is not to be done.” – Grotius from the William Whewell’s 1853 translation, Grotius on the Rights of War and Peace

1. Pew Report: Wide partisan divide on whether voting is a fundamental right or a privilege with responsibilities

3. The Constitution works for the select few – Members of Congress, their staffs will be exempt from Biden’s federal vaccine mandate

5. Refer to #1 – #3 above and this is not so far fetched: Steve Quayle warns Mike Adams: NO MORE ELECTIONS – An imminent catastrophic collapse threatens to take down America before the 2022 mid-terms

Comments Off on Episode 318: Business Governing Not Constitutional Government