Episode 334: Destroying Democracy – Should We? 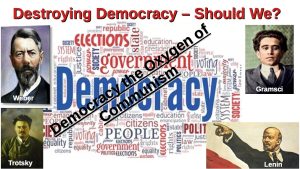 Watch the Vblog at Rumble or Brighteon

The great question for you is who is Destroying Democracy and Should We? We are continuously hearing the comments by Obiden and all the Daemoncrats (pronounced dēmən-crats), mainstream propagandists and progressives (I’ll call them what they are – communists) decrying how those who believe in Foundational Constitutionalism, morality, voter integrity, and education over indoctrination are Destroying Democracy.

As you really think about this, I have a simple and profound answer – YES!

On this weeks program I am taking you into a somewhat modern explanation as to why I am firmly settled on my answer. To give you a couple considerations in this regard I ask you to apply these statements to any and all, even the so called conservatives in political leadership and the known pundits, who use ‘Democracy’ in any form relating to governance and government.

“Democracy is the road to socialism.” Karl Marx

“The political form of a society wherein the proletariat is victorious in overthrowing the bourgeoisie will be a democratic republic.” Vladimir Lenin

“In a democracy the people choose a leader in whom they trust. Then the chosen leader says, ‘Now shut up and obey me.’ People and party are then no longer free to interfere in his business.” Max Weber

“there is no hegemony without democracy” (Gramsci Foundation Institute), Giuseppe Vacca

Think abut Dr. Fauci and the health bureaucrats at state and federal levels with this one:

“Science and democracy are the right and left hands of what I’ll refer to as the move from the realm of necessity to the realm of freedom.” Karl Marx

I can go on across the history of socialism related to democracy as far back as the Greeks but we don’t have the time for that. It is important to understand that in our current flow of history, the modernists have assimilated the philosophical perspectives of democracy into the active ideology of these promotors of socialism and Marxism.

I do want you to listen to the program on Destroying Democracy – Should We? Yet I desire that you think even more deeply as to what that means from the perspective of the developers of the Constitution of 1787. In that thought process, I am compelled to leave you with several last considerations from the creator of the form of communism instantiated in these United States.

“Socialism is precisely the religion that must overwhelm Christianity. … In the new order, Socialism will triumph by first capturing the culture via infiltration of schools, universities, churches and the media by transforming the consciousness of society.”

“The philosophy of praxis does not aim at the peaceful resolution of existing contradictions in history and society, but is the very theory of these contradictions. It is not the instrument of government of the dominant groups in order to gain the consent and exercise hegemony over the subaltern classes. It is the expression of subaltern classes who want to educate themselves in the art of government and who have an interest in knowing all truths, even the unpleasant ones, and in avoiding the impossible deceptions of the upper class, and even more their own.’

And for the deeper thinking here are considerations from a paper on Gramsci reflecting on hegemony and democracy from a paper written by Dylan Riley:

“First, I suggest that hegemony is not just a form of intellectual and moral leadership in general; it is a form of rational intellectual and moral leadership. Because of its rational form, hegemony is inconceivable without pluralism and democracy. Gramsci, unlike what some scholars have suggested about Marx (Megill 2002, 58), did not conceive of socialism as the supersession of politics, or more particularly of deliberation. I develop this point by comparing Gramsci’s concept of hegemony with the Hegelian concept of ethical life. I suggest that two concepts are very similar, and that a misunderstanding of Hegel lies behind the interpretations of Salvadori and Gallia della Loggia.

Second, I argue that hegemony is neither “secreted” by civil society, nor is it a “bottom-up” process of cultural transformation. Typically hegemony is created in a process of decisive political transformation: revolution. I maintain that Salvadori and Galli della Loggia correctly grasp this point. Where a new ruling class comes to power in a non-revolutionary manner, through a process of passive revolution (as in Italy), it is extremely difficult to establish hegemony, and therefore democracy. Democratic forms may emerge, but they will remain weak. To summarize: the whole thrust of Gramsci’s argument underlines the close connection between decisive revolutionary violence and functioning democratic systems. The Prison Notebooks, from this perspective, is an extended theoretical reflection on what historical sociologist Barrington Moore called “The Contribution of Violence to Gradualism” (1993). To understand Gramsci, then, requires one to grasp his commitment to democracy and pluralism and his revolutionary politics in a single intellectual framework”

Should we Destroy Democracy?

If you mean as the Founders of these United States did then Destroying Democracy as the oxygen allowing communism to breath is an absolute and resounding YES. On this program I discuss the Founders perspective regarding democracy from Federalist numbers 10, 11 and 14, as well as the Anti-federalist numbers 6, 36 and 55.

Let me leave you with this as you consider what a representative Constitutional Republic is in contrast to democracy. My emphasis are added with bold, underline and italics.

“By what means is this object attainable? Evidently by one of two only. Either the existence of the same passion or interest in a majority, at the same time, must be prevented; or the majority, having such co-existent passion or interest, must be rendered, by their number and local situation, unable to concert and carry into effect schemes of oppression. If the impulse and the opportunity be suffered to coincide, we well know, that neither moral nor religious motives can be relied on as an adequate control. They are not found to be such on the injustice and violence of individuals, and lose their efficacy in proportion to the number combined together; that is, in proportion as their efficacy becomes needful. From this view of the subject, it may be concluded, that a pure democracy, by which I mean, a society consisting of a small number of citizens, who assemble and administer the government in person, can admit of no cure for the mischiefs of faction. A common passion or interest will, in almost every case, be felt by a majority of the whole; a communication and concert, results from the form of government itself; and there is nothing to check the inducements to sacrifice the weaker party, or an obnoxious individual. Hence it is, that such democracies have ever been spectacles of turbulence and contention; have ever been found incompatible with personal security, or the rights of property; and have, in general, been as short in their lives, as they have been violent in their deaths. Theoretic politicians, who have patronised this species of government, have erroneously supposed, that, by reducing mankind to a perfect equality in their political rights, they would, at the same time, be perfectly equalized and assimilated in their possessions, their opinions, and their passions. ”

Comments Off on Episode 334: Destroying Democracy – Should We?