I have the privilege to interview the Executive Producer/Creator/Writer and two of the actors in a new up and coming TV series titled ‘Declaration.’ It is a delight to speak with Victoria Keffer, the Executive Producer/Creator/Writer of Declaration. She is additionally a script writer and author with 23+ years’ of work including The Vicar Takes A Wife and Purple Sky Woman.

Our engaging conversation delves into the Why – ‘Declaration’ the TV program and What will it do to impact our culture and nation.

Declaration TV is full of Character

Along with Victoria, I am honored to have two of the main characters in ‘Declaration.’ You have to meet Ben Franklin, played by John Tunnel, and Archie Adams, Played by Ryan T. Johnson.

A little more about these two very accomplished actors: 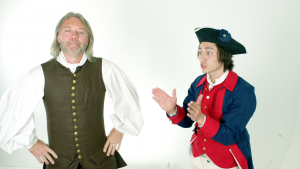 John Tunnell is the owner of Creative Psycho Films, a film editor, producer, musician and star of John Works Too Much on Amazon Prime.

Ryan T. Johnson is an actor, writer, producer, stuntman, and singer. You can see him in The Chosen and Washington’s Armor.

We have a grand time discussing their parts and how they want Liberty to resonate with everyone, especially Generation X – 55 years old. John, Ben Franklin makes a point that is the essence of ‘Declaration’ – comedy has an honesty that many times causes self-reflection. This program is a fun way to look back into the mirrors of history and see that truth does prevail.

I strongly invite you to listen to this Sam Adams Returns program and join in the fun I had exploring this new TV Series.

Not only that, I invite you to be a part of getting this great programing launched. Join me in supporting the launch of this program and here is how you can to it: 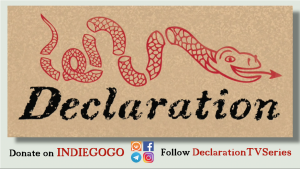 ‘The agreement of the Merchants of this distressed and insulted continent, to with hold importations from Great Britain, it seems to be allowed on all sides, has the strongest tendency towards the repeal of the acts of parliament for raising a revenue in America without our consent. It is no wonder then, that it was oppos’d with so much vehemence at first, by the Cabal; who knew full well, that their Places and their Pensions, and all the delectable profits which they expected to reap, and are now actually reaping, at the expence of the people in town and country, would entirely cease, if these acts, by the means of which their places, pensions and profits arise should be repealed—When they could no longer with any face call it the last efforts of a dying faction, (for the measure was so rational and pacific, that it soon spread far and wide, and was chearfully adopted by all disinterested friends of the country thro’-out the continent) they put on the appearance of the Sons of Liberty; and now their cry is, Where is that Liberty so much boasted of and contended for? We hear them very gravely asking, Have we not a right to carry on our own trade and sell our own goods if we please? who shall hinder us? This is now the language of those who had before seen the ax laid at the very root of all our Rights with apparent complacency,—And pray gentlemen, Have you not a right if you please, to set fire to your own houses, because they are your own, tho’ in all probability it will destroy a whole neighbourhood, perhaps a whole city! Where did you learn that in a state or society you had a right to do as you please? And that it was an infringement of that right to restrain you? This is a refinement which I dare say, the true sons of liberty despise. Be pleased to be informed that you are bound to conduct yourselves as the Society with which you are joined, are pleased to have you conduct, or if you please, you may leave it. It is true the will and pleasure of the society is generally declared in its laws: But there may be exceptions, and the present case is without doubt one.—Suppose there was no law of society to restrain you from murdering your own father, what think you? If either of you should please to take it into your head to perpetrate such a villainous act, so abhorrent to the will of the society, would you not be restrained? And is the Liberty of your Country of less importance than the life of your father! But what is most astonishing is, that some two or three persons of very little consequence in themselves, have Dared openly to give out that They Will vend the goods they have imported, tho’ they have Solemnly pledg’d Their Faith to the body of merchants, that they should remain in store ’till a general importation should take place! Where then is the honor! where is the shame of these persons, who can look into the faces of those very men with whom they have contracted, & tell them Without Blushing that they are resolved to Violate the contract! Is it avarice? Is it obstinacy, perverseness, pride, or from what root of bitterness does such an unaccountable defection from the laws of honor, honesty, and even humanity spring? Is it the Authority Of An Unnatural Parent—the advice of some false friend, or their own want of common understanding, and the first principles of virtue, by which these unhappy young persons have been induced, or left to resolve upon perpetrating that, at the very tho’t of which they should have shudder’d! By this resolution they have already disgrac’d themselves; if they have the Hardiness to put the resolution into practice, who will ever here after confide in them? Can they promise themselves the regards of the respectable body of merchants whom the have affronted? or can they even wish for the esteem of their country which they have basely deserted, or worse, which they have attempted to wound in the very heart.—If they imagine they can still weary the patience of an injured country with impunity.—If—I will not utter it—would not the grateful remembrance of unmerited kindness and Generosity, if there was the least spark of ingenuity left, have Influenced to a far different resolution!—If this agreement of the merchants is of that consequence to All America which our brethren in All the other governments, and in Great-Britain Itself think it to be—If the fate of Unborn Millions is suspended upon it, verily it behooves, not the merchants Only, but every individual of Every class in City and Country to aid and support them and Peremptorily To Insist upon its being Strictly adhered to.’

*** Use of All Pictures have permission of ‘Declaration’ Producer

Comments Off on Episonde 306: Declaration TV the Series