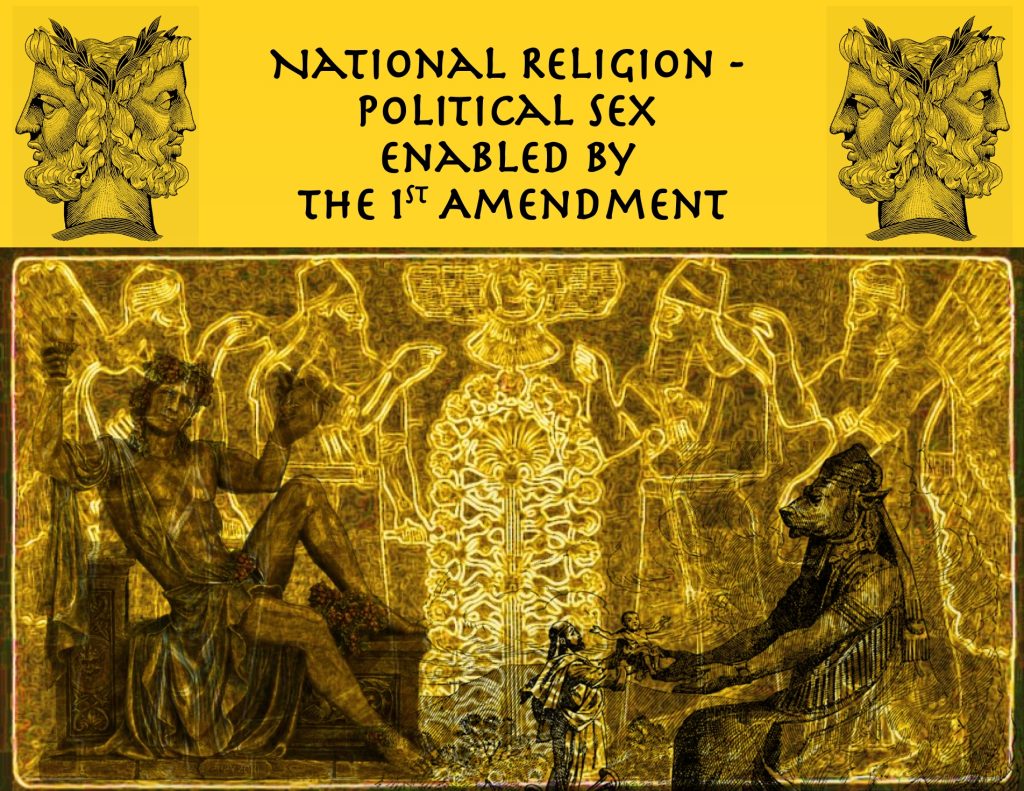 My argument for this program is that for generations and especially for the O’Biden administration, the religion of paganism and environmentalism has become the combined instituted United States National Religion. What is being instantiated into government at every level, business and personal life is a violation of the 1st Amendment establishment clause. Even Senator Hawley has commented that what we are experiencing is a forced religion in demanding you believe that men can get pregnant. (see here) Also, like the modern mega-churches, the deacons and evangelists of CRT is about the Billions they glean from the sheeple. (see: California’s “diversity, equity, and inclusion” class raked in as much as $1 billion in taxpayer money in the past year, according to a study.)

Concluding this written section so that you listen to the further commentary on the podcast or video – We have done terrible work at the task given us by Jesus as noted in that the greater majority of pulpits for over the last 100 years do not bow to the Sovereignty of Christ. We have allowed paganism to supplant our Foundational Biblical Reformation heritage. As we will see next week, liberal theology has lead the parade of paganism (some call it humanism), which are the religions of ancients including Greece, Rome and other past civilizations. Worse than the Romans and Greeks, the National Religion and the liberal churches offer up the youth younger than fifteen to the perversions that the former looked down upon

The fact is, as the Federal government funds what some call ‘the cultural war’, it is in reality the funding of the ancient religions that are the American National Religion being forced on all the Citizenry by the Administration via the 1st Amendment.

Scraping the top layer of the cesspool, Religion and politics have been intimately tied together since nations were regenerated after The Flood. The fallen nature of mankind gravitates to power and the use of sexuality in pursuing and holding power over individuals and even nations.

Let’s start with this example – The power elite and kings ‘in ancient Sumeria, a young king was expected to show that his relationship with the goddess was strong by bedding her chief priestess in full view of his subjects.2’ In fact, in most ancient political environments, especially in Rome, Power was expressed by being fully and dominantly sexual. This meant having sex with men or women and never being an effeminate, rather being the full warrior dominant leader of people. (see #5 in the references)

‘…Greek boys were not taught to see themselves as “either” heterosexual or homosexual (a distinction that did not really exist for another two thousand years), for Greek culture generally acknowledged that such desires could naturally coexist in varying degrees, just as we might think of the desires to engage in a variety of sexual acts.

The emphasis placed on these relationships varied in the different Greek states. According to the German scholar Theodor Däubler, “Any attack on the love of boys in Sparta’s prime would have . . . been considered unwholesome,”3 and it was thought shameful in Crete for a well-born boy not to have a male lover. The customs in Athens were conflicting. On the one hand, sophisticated men sought out pretty young men for lovers; on the other hand, some fathers hired guards for their sons “as soon as they’re old enough to be attractive.4”

Now isn’t that something, the Greeks didn’t like pedophiles…. Yet modern America wants to change their biology…. And for what?

A Recent Point To Ponder

The question that immediately struck me as I read the article is: ‘How did the nation that was a light for early American settlers come to this end?’ I was compelled to look once again into the Scottish Reformation and then the Scottish Enlightenment. Ugg… Enlightenment should be benightedness or dim-lit or even better dimwittedness? More on this next week.

There is no way to keep this simple. This is going to be a multi-program series.

Sam and the Anti-Federalist ‘The Farmer’ address the ‘effeminate’ as negatives on a Republic, with my emphasis added.

‘…Will Vanity & Levity ever be the Stability of Government, either in States, in Cities, or what, let me hint to you is of the last Importance, in Families? Of what Kind are those Manners, by which, as we are truly inform’d in a late Speech, “not only the freedom but the very Existence of Republicks is greatly affected?” HOW fruitless is it, to recommend “the adapting the Laws in the most perfect Manner possible, to the Suppression of Idleness Dissipation & Extravagancy,” if such Recommendations are counteracted by the Example of Men of Religion, Influence & publick Station? I meant to consider this Subject in the View of the mere Citizen. But I have mention’d the sacred Word Religion. I confess, I am surprized to hear, that some particular Persons have been so unguarded as to give their Countenance to such kind of Amusements. I wish Mr —— would recollect his former Ideas when his Friend Whitfield thunder’d in the Pulpit against Assemblies & Balls. I think he has disclaim’d Diversions, in some Instances, which to me have always appear’d innocent. Has he changed his Opinions, or has the Tendency of things altered? Do certain Manners tend to quench the Spirit of Religion at one time & are they harmless at another? Are Morals so vague as to be sanctified or dispensed with by the Authority of different Men? He does not believe this. But I will not be severe, for I love my Friend. Religion out of the Question for the present. It was asked in the Reign of Charles the 2d of England, HOW shall we turn the Minds of the People from an Attention to their Liberties? The Answer was, by making them extravagant, luxurious, effeminate. Hutchinson advised the Abridgment of what our People called English Liberties, by the same Means. We shall never subdue them, said Bernard, but by eradicating their Manners & the Principles of their Education. Will the judicious Citizens of Boston be now caught in the Snare, which their artful, insidious Enemies, a few years ago laid for them in vain? Shall we ruin ourselves by the very means, which they pointed out in their Confidential Letters, tho even they did not dare openly to avow them? Pownal, who was indeed a mere Fribble (frivolous or foolish person), ventured to have his Riots & Routs at his own house, to please a few Boys & Girls. Sober People were disgusted at it, & his privy Councellors never thought it prudent to venture so far as expensive Balls. Our Bradfords, Winslows & Winthrops would have revolted at the Idea of opening Scenes of Dissipation & Folly; knowing them to be inconsistent with their great Design, in transplanting themselves into what they called this “Outside of the World.” But I fear I shall say too much. I love the People of Boston. I once thought, that City would be the Christian Sparta.’

Anti-Federalist No. 3, New Constitution Creates a National Government; Will Not Abate Foreign Influence; Dangers of Civil War and Despotism

‘As to any nation attacking a number of confederated independent republics … it is not to be expected, more especially as the wealth of the empire is there universally diffused, and will not be collected into any one overgrown, luxurious and effeminate capital to become a lure to the enterprizing ambitious. That extensive empire is a misfortune to be deprecated, will not now be disputed. The balance of power has long engaged the attention of all the European world, in order to avoid the horrid evils of a general government. The same government pervading a vast extent of territory, terrifies the minds of individuals into meanness and submission. All human authority, however organized, must have confined limits, or insolence and oppression will prove the offspring of its grandeur, and the difficulty or rather impossibility of escape prevents resistance. Gibbon relates that some Roman Knights who had offended government in Rome were taken up in Asia, in a very few days after. It was the extensive territory of the Roman republic that produced a Sylla, a Marius, a Caligula, a Nero, and an Elagabalus. In small independent States contiguous to each other, the people run away and leave despotism to reek its vengeance on itself; and thus it is that moderation becomes with them, the law of self-preservation. These and such reasons founded on the eternal and immutable nature of things have long caused and will continue to cause much difference of sentiment throughout our wide extensive territories. From our divided and dispersed situation, and from the natural moderation of the American character, it has hitherto proved a warfare of argument and reason.’

7. A Sermon on Religious Beliefs and the Courts

6The full paper: THE ANCIENT WORLD: THE TRIUMPH OF AUGUSTINE at https://web.law.columbia.edu/sites/default/files/microsites/law-theory-workshop/files/Chapter%20I%20_September%201_%20_for%20Columbia_.pdf