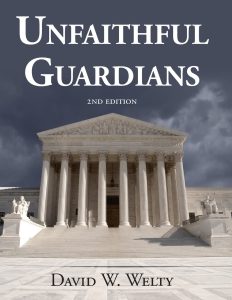 The 3rd Edition is available

Unfaithful Guardians is a program that ran in 2018. In dealing with a family death of a Patriot, conversations with my Aunt would sometimes focus on the Supreme Court. With that, I am dedicating this program to her.

Bringing back a review of Unfaithful Guardians, written by Dave Welty is most appropriate considering the recent rulings of the Supreme Court of The United States (SCOTUS).

In this is interview with Dave Welty, the author of “Unfaithful Guardians” is refreshing as well as it gives a great comparative to what is happening in the court now compared to the philosophical shifts over one hundred years ago. Dave has written a fantastic walk through history culminating in what flipped with the Judicial system and Supreme Court. His clear understanding of the 14th Amendment is deeply researched. He can clearly articulate the Original Intent established by the 39th Congress and the State Ratifying Conventions of the Day.

As always, remember: The Founders wanted us to gain knowledge and get involved! Being a Citizen is an Active involvement in our political life! Let’s get our feet on the street for this time is critical!

Learn you State and the Federal Constitutions.

Regarding Elections and Education

TO THE LEGISLATURE OF MASSACHUSETTS. JANUARY 27, 1797.

[Independent Chronicle, January 30, 1797; a text is in the Massachusetts Archives].

‘…In pursuance of the provision in the Constitution, the people have recently exercised their own sovereign power in the election of another President. Elections to offices, even in the smallest Corporations, are and ought to be deemed highly important; of how much more importance is it, that elections to the highest offices in our extensive Republic, should be conducted in a manner and with a spirit becoming a free, virtuous and enlightened people, who justly estimate the value of their sacred rights.

In the late elections, the people have turned their attention to several citizens, who have rendered eminent services to our federal Commonwealth in exalted stations. Upon which ever of the Candidates the lot may have fallen, the people have reason to expect, that his administration will be strictly conformable to the letter and true intent of the Constitution, that it may long continue to be the guarantee of our freely elective Republican Government.— On fair and uncontrouled elections, depend, under God, the whole superstructure of our government— should corruption ever insert itself in our elections, there would be great danger of corruption in our governments.—Although it is not long since the subject of elections was under the consideration of the Legislature, and a law passed for the purpose of further security to the people in the free exercise of this invaluable right; yet give me leave to suggest for your consideration, whether still further securities may not be provided, so that the rightful electors may not be frustrated in their honest intentions. That elections may not be contaminated by strangers, or unqualified persons, may it not be necessary that every man may be known, as far as possible, when he presents himself to give his vote; this may be more especially important in our seaports and other populous towns, in which many foreigners of all sorts frequently reside. I would be far from dictating to you, but I would submit to your judgment whether, considering the liberality of this country to foreigners, and the frequency of their naturalizations, it may not be eligible that such foreigners should be required when they offer their votes to the Selectmen of the towns, to produce authentic certificates from the Courts, by which they were endowed with so high a privilege, as a test of their citizenship. As Piety, Religion and Morality have a happy influence on the minds of men, in their public as well as private transactions, you will not think it unseasonable, although I have frequently done it, to bring to your remembrance the great importance of encouraging our University, town schools, and other seminaries of education, that our children and youth while they are engaged in the pursuit of useful science, may have their minds impressed with a strong sense of the duties they owe to their God, their instructors and each other, so that when they arrive to a state of manhood, and take a part in any public transactions, their hearts having been deeply impressed in the course of their education with the moral feelings—such feelings may continue and have their due weight through the whole of their future lives.’

1. Unfaithful Guardians Third Edition by David Welty. I still have a few copies so email me if you want one.

2. My book is a companion to Dave’s Book. Get your copy of: ‘From Covenant To The Present Constitution’. Get your copy by emailing me or at Amazon or at The Book Patch For a signed copy contact me at tom@samueladamsreturns.com