Is The Public Pension Crisis Affecting Everyone? 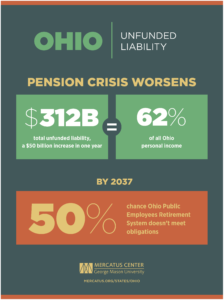 Wharton School of Business posted an article/pod cast in August 2018 regarding “The Time Bomb Inside Public Pension Plans”. On the pod cast, Wharton’s Olivia Mitchell and Leora Friedberg of the University of Virginia discuss the $4.4 trillion public sector pension shortfall. The research is very clear that these Public Pension plans have been it trouble for years and the chickens are coming home to roost.

What’s that mean for Ohio?

About a year ago everyone was getting excited that the five Ohio Public Pension programs were really hitting the growth numbers ( Big returns help bolster Ohio’s five public pension funds ) and all would be well. Yet when one follows the other links in the noted article one will see that the candy in the jar is really all paper wrappers. In fact we will have to start back five months earlier to September 2017 and an article from the Mercatus Center at George Mason University, titled “Ohio’s Worsening Pension Crisis” that opens with “Ohio’s unfunded pension liability was an estimated $312 billion in fiscal year 2015, a $50 billion increase from the previous year. This figure, measured using a risk-free discount rate, equals 62 percent of the state’s aggregate personal income—that is, residents’ total earnings from wages, investments, and other sources of income.”

Here from the Mercatus Center article is a really interesting and scary comment when we consider all the “special class of citizens” created by the Boards of the various County “taxing Subdivisions”: “The Ohio Public Employees Retirement System has only a 50 percent chance of being able to meet its obligations by 2037–just two decades from now.”

So why is it that the various Boards of the “taxing Subdivisions” use the County’s taxpayer dollars to fund 100% of the retirements for key individuals hired by the Boards? Do you get 100% of your retirement paid for by your employer or do you have to contribute?

Let us consider this remedy as one that any business owner would. Or even better, let’s look at it from the home owners perspective that when the next flurry of Levies come up in May or any special election, hard questions are asked about the “special class of citizens” working for the entity wanting Levy dollars.

Here are several thoughts to check off:

For the most part many public employees in public safety and education do pay a somewhere around or up to 14% of their retirement out of their paycheck. Yet, as the Mercatus Center article points out, “Other plans at even greater risk of not meeting obligations include the Ohio State Teachers Retirement System, the Ohio School Employees Retirement System, and the Ohio Police and Fire Pension Fund.”

Ouch! That is a whole another area to investigate. But let’s focus on those taxing Subdivision Boards that are going to be coming after your property taxes. Remember that increasing property taxes cut into your disposable income!

In the four preceding articles of this series, or I should say Saga, we know that in general Levies are proven to be ‘Unaffordable’. We now know that there is a National Pension Crisis in the Public Employee Pensions. We also know that Ohio has a critical problem with the Public Pension System too.

We also know that unbeknown to the everyday property tax paying Citizen, the taxing Subdivision Boards have created a ‘special class of citizen’ that for all mathematical purposes has exasperated the problem of the Public Pension issue to the extent that you are not taxed enough to fix it.

So when the Levies come around these next cycles and they will, ask yourself:

By Voting for this Levy am I causing “Self-Inflicted Eviction” when I can no longer afford my Property Taxes?