Chaplains and Clergy of the Revolution: Chapter 25 – John Gano 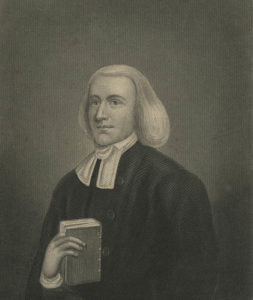 This Chapter about John Gano contains — The Baptists Of Virginia. — Gano’s Early Life. — Visits The South And Preaches. — Arraigned For It, But Is Acquitted And Licensed. — Anecdotes Of His Coolness And Courage. — Settled In North Carolina. — Offered A Captain’s Commission In The Army Against The Cherokees — Declines. —Returns North. — Finally Settles In New York.— His Congregation Broken Up. — Joins The Army As Chaplain. — Under Fire At White Plains. — At Trenton. — Chaplain Under Clinton At Fort Montgomery. — His Description Of The Taking Of The Fort. — With Clinton’s Brigade At Albany. — Its Chaplain In The Expedition Against The Indians. — Anecdotes Of Him In This Campaign. —Sermon On The Fourth Of July. — His Faithfulness. — Goes South With The Army Advancing Against Cornwallis. — Returns To His Church At The Close Of The War. — Removes To Kentucky.—His Death.

John Gano is another profound leader. This is clearly noted at the end of this chapter with: “True to his country, true to his high office, true to his God, he went through the trying scenes of the Revolution, and through life honored, respected and loved by all who knew him, and now sleeps with those whose names are inscribed in the hearts of their countrymen.

A couple of key points about John Gano are that he was a Baptist and he was never bashful. This Chapter is clear that Gano made a profession of his faith in Christ at an early age. It also talks about his personal struggles that slowed him becoming a minister and his willingness to stand up to ‘church authority’ when it was correct to do so. Interestingly, the Baptist denomination was small and often outside of the political workings of the nation but when the Revolution became necessary – they were all in!

The fun aspect of this Chapter are all the anecdotal comments about John Gano. Also, his perspective of the battle with the Western New York Indians is interesting in comparison to what we have already heard in other Chapters.

This Chapter is one of the longer chapters but we get a lot in it about the Patriotic Character of this amazing Clergy man who was a fighting Chaplain.

Comments Off on Chaplains and Clergy of the Revolution: Chapter 25 – John Gano