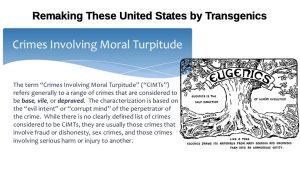 ‘…so one set of thinkers can in some degree prevent further thinking by teaching the next generation that there is no validity in any human thought.’

There are many issues in this nation that captivate our attention. Remaking these United States has been on the slippery slope, as I pointed out last week, since 1707. Yet as the theology of Europe changed in the 18th Century to the present, the most heinous sins of the nations captivated these United States in Eugenics.

Chesterton wrote in ‘Eugenics and Other Evils’ –

‘I know that it means very different things to different people; but that is only because evil always takes advantage of ambiguity. I know it is praised with high professions of idealism and benevolence; with silver-tongued rhetoric about purer motherhood and a happier posterity. But that is only because evil is always flattered, as the Furies were called “The Gracious Ones.” I know that it numbers many disciples whose intentions are entirely innocent and humane; and who would be sincerely astonished at my describing it as I do. But that is only because evil always wins through the strength of its splendid dupes; and there has in all ages been a disastrous alliance between abnormal innocence and abnormal “sin. Of these who are deceived I shall speak of course as we all do of such instruments; judging them by the good they think they are doing, and not by the evil which they really do. But Eugenics itself does exist for those who have sense enough to see that ideas exist; and Eugenics itself, in large quantities or small, coming quickly or coming slowly, urged from good motives or bad, applied to a thousand people or applied to three, Eugenics itself is a thing no more to be bargained about than poisoning.’

This week I am applying the writing of Chesterton regarding to eugenics to all things ‘Trans,’ therefore we have ‘Transgenics.’ As you can see in the references, this discussion has been going on for decades. For this program, I am discussing how the ‘abortion and trans’ movements are related to modern Eugenics and that this is that full extension of this evil into modern times to insure the Remaking These United State.

In 1927 the words of Supreme Court Justice Oliver Wendall Holmes spoke wrongly about using Eugenics in relationship to the Supreme Court Decision, “…three generations of imbeciles are enough.” Yet, through educational Eugenics now, in the destruction of ‘Thought,’ I would have to say: Gee, see… He was predicting our present political class.

At present, our nation is embroiled in evil. It is easily recognized in the rallies with signs labeled to support all forms of godlessness.

In preparation for the mid-Twentieth Century attacks on Constitutional liberty, and now the flagrant extirpation of all foundational truth, the various predominant religious denominations have been and are at the center. I have outlined this on numerous programs. I have to keep it simple here – Think, Venezuela owned by China’s Belts and Roads.

As I was writing this, the information came out regarding the Biden ‘Disinformation Czar’ resigning. And the administration blames those who love Liberty and the Constitution.

– Third segment: Remaking These United State in the Image of Venezuela and China

Regardless of what you may think, and I hope that you do think, there is continuity in the topics of the program outline. The simple threads here are all tied to not just individual’s sin but the sins of the nation. Remaking These United States begins with remaking the individual in the light of the Biblical Reformation Gospel, self-governance and Constitutional Foundational principles with, of course, addressing the issues the Anti-federalists predicted.

Regarding Sam’s character and some wisdom from various sources:

The following from – from Samuel Adams Great Americans In History:

‘There is but little account given of his mother, except that she was strictly devotional according to the puritan standards. She left a lasting impress upon the boy Samuel, through her rigidly pious character, giving him that moral stamina for which he was so conspicuous. The sober cast of his nature was also derived from her.’

They refused to obey. The order to fire was given. Eight citizens were killed and many wounded.

The war for liberty was begun.

The Americans had “put the enemy in the wrong.” The regulars had fired first. Lexington’s sad green was stained with the first blood of the Revolution. But as the firing was heard by the two escaping men, Adams stopped, threw up his arms, and exclaimed in a voice of patriotic rapture, “Oh, what a glorious morning for America is this!”

It was a glorious morning, for it witnessed the display of great moral sublimity in the stand these few noble men took, believing themselves to be in the right, against the greatest power on the globe.

The love of justice was his ruling passion; it was the main-spring of all his conduct. He made it a matter of conscience to discharge every duty with scrupulous fidelity and scrupulous zeal.

The freedom and prosperity of his country; the union of all her sons in a common and national fraternity; and the advancement of moral truth, harmony and virtue, were the grand objects of his unremitted pursuit.

During the most gloomy period of our national struggle, when others were desponding, he always kept up cheerful spirits, gently rebuked the fears of others, and expressing his unwavering reliance upon the protection of an overruling Providence, who, he had felt assured from the first would conduct the country through all its trials to deliverance and prosperous repose.

As a patriot, he toiled incessantly, without complaint; as a religious man, he trusted in God, and was not confounded.

4. Eugenics and Other Evils by G. K. Chesterton

6.. “A New Departure from Eugenics” / “Eugenics and the practice of transgendering children”

7. Eugenics and the practice of transgendering children

12. Bill Maher Details How America Has ‘Lost’ To China On HBO’s ‘Real Time’