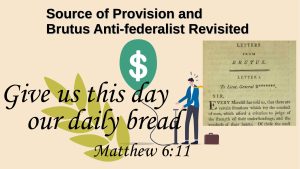 Source of Provision Video available at Rumble and/Or Brighteon

This week is a short followup from last week as I ask ‘What is the Source of Provision’ in our lives? In this time of economic upheaval, the echo chambers all look to the government to provide solutions. Really? The founding era had comparable and worse economic maladies but they had strong pulpit leaderships that looked to the true source of provision.

The majority of this program is a blast from the past. With this being Easter week I was looking for an easy way by doing a program rerun. Well, for technical reasons, I could not get a 2015 program to meet the sound quality I wanted therefore, this is a fresh program. Not only did I want to emphasize the ‘Source of Provision’ but also the historical prophetic writing of ‘Brutus Anti-federalist Revisited.’ Robert Yates, Brutus, argues against the Federal Constitution with this simple thought in mind:

‘But if, on the other hand, this form of government contains principles that will lead to the subversion of liberty — if it tends to establish a despotism, or, what is worse, a tyrannic aristocracy; then, if you adopt it, this only remaining assylum for liberty will be shut up, and posterity will execrate (feel or express great loathing for) your memory.’

Brutus No. 1 is revisited in this program and I do hope that we take note of the warnings such that we have courage to act so as to secure Liberty over economy by first understanding the Source of Provision in all things.

– First segment: History is our Present and Last week followup, Source of Provision

– Third segment: Continue with Brutus No. 1 andSam Adam on morality and Constitutional Rights of Conscience

“In the form now presented to you, there are no more departments of government than are absolutely necessary for the free and full exercise of the powers thereof…’

For the most part, the Citizens during the founding era had a clear understanding of their source of provision. This understanding was kept deep in their very being because the majority of pulpits were not taken by modernism and preach Biblical Reformation truth. With that, the Anti-federalists such as Brutus had insights and understanding of the Biblical truth regarding the sins of mankind such as envy, power mongering and deception to the extent that Robert Yates predicted our present.

RESOLUTION OF THE CONTINENTAL CONGRESS.

[MS., Papers of The Continental Congress.]

It having pleased Almighty God through the Course of the present year, to bestow great & manifold Mercies on the People of these United States; And it being the indispensible Duty of all Men gratefully to acknowledge their obligations to Him for Benefits receivd.

Resolvd, That it be and hereby is recommended to the legislative or executive Authority of each of the said States, to appoint Wednesday the 30th day of December next to be observd as a Day of publick Thanksgiving and Praise. That all the People may with united Hearts on that Day express a just Sense of His unmerited Favors:—Particularly in that it hath pleased Him, by His over ruling Providence to support us in a just and necessary War for the Defence of our Rights and Liberties;—By affording us seasonable Supplys for our Armies—by disposing the Heart of a powerful Monarch to enter into Alliance with us and aid our Cause—by defeating the Councils and evil Designs of our Enemies, and giving us Victory over their Troops —and by the Continuance of that Union among these States, which by his Blessing, will be their future Strength & Glory.

And it is further recommended, that together with devout Thanksgivings may be joined a penitent Confession of our Sins, and humble Supplication for Pardon through the Merits of our Savior. So that under the Smiles of Heaven, our publick Councils may be directed—our Arms by Land and Sea prosperd—our Liberty and Independence secur’d—our Schools & Seminaries of Learning flourish—our Trade be revivd—our Husbandry and Manufactures increasd, and the Hearts of all impressd with undissembled Piety, with Benevolence, and Zeal for the publick Good.

1. Embedded in the outline.

Comments Off on Episode 344: Source of Provision and Brutus Anti-federalist Revisited