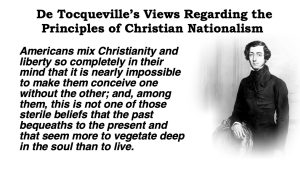 Video of De Tocqueville On Christian Nationalism at Rumble or YouTube

In so many ways, ‘Democracy in America was clearly De Tocqueville’s views regarding the principles of America and he makes many references to what many are debating what is called Christian Nationalism. For me, there is no debate but only ignorance of our history and a corruption of theology.

‘It must not be imagined that the piety of the Puritans was of a merely speculative kind, or that it took no cognizance of the course of worldly affairs. Puritanism, as I have already remarked, was scarcely less a political than a religious doctrine. No sooner had the emigrants landed on the barren coast described by Nathaniel Morton than it was their first care to constitute a society, by passing the following Act:

“In the name of God. Amen. We, whose names are underwritten, the loyal subjects of our dread Sovereign Lord King James, etc., etc., Having undertaken for the glory of God, and advancement of the Christian Faith, and the honour of our King and country, a voyage to plant the first colony in the northern parts of Virginia; Do by these presents solemnly and mutually, in the presence of God and one another, covenant and combine ourselves together into a civil body politick, for our better ordering and preservation, and furtherance of the ends aforesaid: and by virtue hereof do enact, constitute and frame such just and equal laws, ordinances, acts, constitutions, and officers, from time to time, as shall be thought most meet and convenient for the general good of the Colony: unto which we promise all due submission and obedience,” etc.

END_OF_DOCUMENT_TOKEN_TO_BE_REPLACED

Comments Off on Episode 379: De Tocqueville On Christian Nationalism

Chaplains and Clergy of The Revolution: Chapters 3 and 4

This posting is Chapters 3 and 4 of the 46 Chapters in The Chaplains and Clergy of the Revolution: is the Historical Fact that Christianity (see the link at the end) is the root of our American Heritage and a key factor in the inspiration of the Revolution. Good governance is God’s governance and the Citizenry during the Founding era understood this. Those that were Chaplains and Clergy were not just religious mouth pieces. NO, They were warrior Patriots that spoke – first the Word of God and then the musket or sword.

At the end of this posting and future postings we will include the Table of Contents to the book with the links back to the previous Chapters already recorded.

Please share with Family and especially with your Pastors and Church leaders.

END_OF_DOCUMENT_TOKEN_TO_BE_REPLACED

Comments Off on Chaplains and Clergy of The Revolution: Chapters 3 and 4