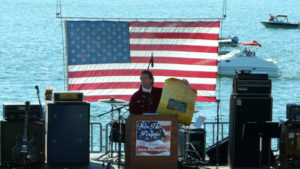 Sam Adams in Vancouver, Wa. Expounding on the Declaration of Independence

To Kick it off here is a short video of reflection:

The full program video further down.

This weekend and on Monday many are celebrating the TEA Party 10th Anniversary. I am one of the people that was there at the beginning. Well, actually, I was there in 1985 when Citizen groups were disparaged and called radical militia. Hmmm, what about the Sons of Liberty, which I have been since the mid-60’s.

What is important to note for this TEA Party 10th Anniversary is that the philosophy and Foundational ideology of Taxed Enough Already are rooted in Patriotic truth that Sam Adams wrote about in 1748. So the Viability of ‘Citizens taxing’ responses is an issues that has great historical significance. Yet, we saw a lull of the rising star of TEA Party almost immediately after a couple years of national prominence. What are the 2019 Opportunities for the remnant organizations?