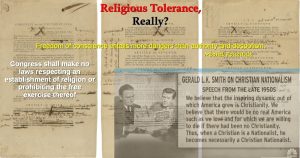 Justice Story, in his Commentaries on the Constitution wrote: END_OF_DOCUMENT_TOKEN_TO_BE_REPLACED