Episode 362: ‘Terrible Things Are Going to Happen’ – Pump The Breaks 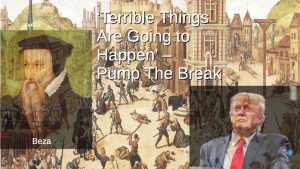 all that is happening in these United States and particularly around the invasion of his house.

Now, my opening statement could be an emotional trigger. So here is the full headline linked to the full article: Donald Trump Warns ‘Terrible Things Are Going to Happen’ Unless Political Temperature Cools; Blames FBI Raid

What are the rumblings regarding ‘terrible things are going to happen?’ Will the citizens act as they did during the Boston Stamp Act response? To this question, in the first and third segments, I will bring the reactions of the 1765 Boston citizens to our present time as well as what was Sam Adams response and actions.

What was said was said before

Here is the reality of the reaction of Bostonians to the Stamp Act, There is Nothing new under the sun (Ecclesiastes 1:9). You have heard me quote that a lot over the years. With that in mind, what is newer is that we have been negligent in ensuring the principles of keeping a Republic are inculcated into each generation. The pulpits do not teach of ‘covenant in government’ nor covenant in general, with the exception of some reformation minded pastors and teachers.

We have allowed the ‘Administrative State/Bureaucracies’ to become the rulers, with legislatures abdicating responsibility to these entities. Worse, the legislators have abdicated to the courts as well. We are experiencing ‘terrible things’ by what those in the administrative state and courts take upon themselves to ‘rule’ over the citizenry. The fact is that the elected, the Lesser Magistrates, are not acting in accordance with their ‘Oath’ as responsible agents in the arena of out Political Covenant, being State and Federal Constitutions.

In the second segment I review excerpts of John Witter’s essay ‘Rights, Resistance, and Revolution in the Western Tradition: Early Protestant Foundations.’ It is time that we look back to the teaching of Theodore Beza and understand that Samuel Adams was known as ‘The Father of the Revolution’ because he clearly lived the principles of the Reformers like Beza.

Beza saw the ‘terrible things ‘ in the events of the St. Bartholomew’s Massacre. The event was genocide on Calvinism as much as the siege of Magdeburg was an attempt to end Lutheranism. In our present time, the assault has not reached the physical level of either previous event but is at the cusped of violating every point that Beza laid out in his ‘hierarchy of political abuses escalating to tyranny to which the lower magistrates must respond.’

My run through the Witter essay begins with Political Covenant and has to stop, due to time constraint, with ‘the most obvious cases of tyranny for Beza were the Magistrate’s open and persistent violations of the First and Second Tables of the Decalogue.’

It is most unfortunate that ‘the Decalogue’ is not understood in its true context and application for all of time and until the end of time. Hopefully you will read John Witter’s essay from the references below.

Regarding the 1765 Stamp Act Riot in Boston, taken from The Live and Public Service of Samuel Adams Volume I:

‘These outbreaks of lawless violence, though manifesting the spirit of opposition to the late acts of Parliament, were viewed with horror by most of the popular leaders, and by none more so than Mr. Adams. The period of peaceful remonstrance had not-yet terminated with him. It was the policy of the Colonies to avow their sincere loyalty to Great Britain, which they reiterated in every state paper; and acts of insubordination were only calculated to mar the harmony of these plans. Petitions and dutiful representations were to be the basis of operations for ten years to come, though a few looked beyond these measures to an eventual appeal to Heaven. In the present instance, Adams agreed with his friend Mayhew that he would rather lose his hand than encourage such outrages, and he personally aided the civil power in preventing them.’

‘A town meeting was summoned early on the following day, at which the last night’s proceedings were condemned, and a series of resolutions adopted desiring the Selectmen to suppress the like riots for the future, and pledging the aid of the people to preserve order.* Writing to Kicliard Jackson, the Colonial agent, a few months later, as one of a committee of the Assembly, Adams referred to this riot particularly, apprehending its evil effects against the efforts which were making in behalf of the Province: “As the Stamp Act had given the greatest uneasiness even to the most judicious men of the Colony,” it was not, he thought, “to be wondered at, that among the common people such steps should be taken as could not be justified, it being frequent in populous towns when grievances are felt. This had been the case in Boston, where the people had shown their resentment in such ways as were not uncommon elsewhere.” These proceedings he denounced as “high-handed outrages,” ” of which the in- habitants immediately, at a meeting called for the purpose within a few hours after the perpetration of the act, publicly declared their detestation. All was done the day following that could be expected from an orderly town, by whose influence a spirit was raised to oppose and suppress it. It is possible these matters may be represented to our disadvantage, and therefore we desire you wiU take all possible opportunities to set them in a proper light.”

Comments Off on Episode 362: ‘Terrible Things Are Going to Happen’ – Pump The Breaks