Episode 363: Deserving of What It Is – Perish With Your Oppressors

It is clear that these United States are deserving of what it is and perish with your oppressors. The question for 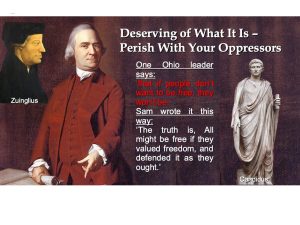 November will be: Can the repudicans take back Congress and will those elected restore Federalism via true Constitutionalism to maintain a Free Republic?

‘I Believe that no people ever yet groaned under the heavy yoke of slavery, but when they deserv’d it. This may be called a severe censure upon by far the greatest part of the nations in the world who are involv’d in the misery of servitude: But however they may be thought by some to deserve commiseration, the censure is just. Zuinglius, one of the first reformers, in his friendly admonition to the republic of the Switzers, discourses much of his countrymens throwing off the yoke: He says, that they who lie under oppression deserve what they suffer, and a great more; and he bids them perish with their oppressors. The truth is, All might be free if they valued freedom, and defended it as they ought.’

An Ohio State wide leader agrees with Sam Adams to the extent that this friend of mine often says something to the effect, ‘that if people don’t want to be free, they won’t be.’ Sam wrote it this way,

‘The truth is, All might be free if they valued freedom, and defended it as they ought.’

We are only seeing the rumbling of a defense in the primaries for this mid-term election. With that, we have seen again this past Tuesday what is being called a Red Wave. With so called ‘conservative’ Repudicans being moved forward to the November general election. In Florida, the leftist school board members are put to rout in a substantial shift with hopes of removing the anti-Constitutional, liberty haters destroying the children there.

Yet, at the same time many in general population across this nation are spellbound with the deception of the ‘academic experts’ to the detriment of clear Constitutional policy, common sense and foundational truth. This week I received two articles that speak to this issue distinctively. The first from my friend in the Seattle area, Gary Randall, who writes about two professors – one from Harvard and the other from Yale – “Broken Constitution” Stands in the Way of Freedom. The gist of the article being:

The pair issued a call to “radically alter the basic rules of the game” by no longer requiring us to “justify our politics by the Constitution.”

Then, a past guest, Dr. Ben Merkle wrote about ‘Big Ed, Too Big To Fail.’ In this article Ben writes:

‘In an upcoming report from Bain and Company the authors point out that nearly 33% of all schools are struggling and that 49% of public universities are on an unsustainable financial path. More and more people are pointing out the flawed model, like in this piece by Jason Wingard, president of Temple University. That said, many in higher ed leadership and too many of the institutions they run are on autopilot, hurdling toward an inevitable economic failure with no plans to change course or do anything to prepare for what’s coming. Much of this might be because the current higher ed leadership team will just bail when things get bad. With pensions and retirement plans in hand, they can sail into the sunset and leave the problem to someone else. And perhaps more importantly, change doesn’t happen because American higher ed is so heavily subsidized by federal student loans that nobody really sees a way out of the mess.’

What is sad about what Ben states is that in Ohio, The funding for education and especially State Colleges and Universities is established in the Ohio Constitution. What a nightmare it is to get that changed.

Join me in the first segment by again diving into Sam Adam 1771 article ‘Candidus.’ (See previous programs regarding this Candidus article Here and Here.) In the second segment, I take you through the evil mind of Yuval Noah Harari and May touch on the Constitution and culture destroyer by the funding of wokeness via BlackRock Capital. Lastly, in the third segment, I will re-emphasis Sam Adams writing as Candidus as well as discuss a letter he wrote to John Adams in 1790, when Jon was president.

Just to get the reference juices flowing:

‘A Republic, you tell me, is a Government in which “the People have an essential share in the sovereignty;” Is not the whole sovereignty, my friend, essentially in the People? Is not Government designed for the Welfare and happiness of all the People? and is it not the uncontroulable essential right of the People to amend, and alter, or annul their Constitution, and frame a new one, whenever they shall think it will better promote their own welfare, and happiness to do it? That the Sovereignty resides in the People is a political doctrine which I have never heard an American Politician seriously deny. The Constitutions of the American States reserve to the People the exercise of the rights of Sovereignty; by the annual, or biennial elections of their Governours, Senators, & Representatives; and by empowering their own Representatives to impeach the greatest officers of the State, before the Senators who are also chosen by themselves.

We the people is the stile of the federal Constitution. They adopted it; and conformably to it, they delegate the exercise of the Powers of Government to particular persons, who, after short intervals resign their Powers to the People, and they will re-elect them, or appoint others, as1 they think fit.’

Comments Off on Episode 363: Deserving of What It Is – Perish With Your Oppressors