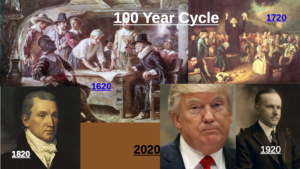 This 100 Year Cycle is now the focal point of the 2020 election is much the same way it was in the previous two hundred years. Taking a walk through history is suppose to be a time to learn not to repeat the sins of the past but as we know, humanity is fallen. Uncovering this cycle is an interesting indicator of what happens when the political mayhem follows the ebb and flow of predominance in humanistic leadership over strongly Christian influenced leadership.

The references for this program are ripe with the fruit of conflict. The emphasis is on the key elements in the presidential election years of 1820 to the present, 2020 with the historical setting of America from 1620 through our Colonial challenges.

In this 100 Year Cycle I am jumping to 1820 and just a couple of the key issues in kind to 2020. First it was a re-election year. President Monroe was up for a vote. He was a popular president and he had a lot going on economically, the expansion of the Country with new States coming in, the issue of what kind of state they would be in relationship to slavery and then there was the press.

Yes, the rise of a leftist media began in 1820. The effects of Ricardian economics was moving to America, the issues in labor vs capitalism drove a new form of press as noted in the references below via that article from the Labor Press Project stating: “Born in antagonism to both merchant capitalists and the mainstream press, labor leaders in Philadelphia and New York published the Mechanics Free Press and the Working Man’s Advocate, criticizing corrupt politics and demanding that capitalists and politicians alike reckon with working-class men as citizens and the “blood, bone, and sinew” of the market place.”

I just want to jog your memory here, twenty-eight years later, Marx releases the Communist Manifesto. I think you can begin to get the point of influencers in the new media of 1820. And who are the influencers in the media of 2020? How a bout the same ideology? Yes, the names change but the sins remain the same.

“Silent Cal” took the stage by storm when President Harding died and he, Calvin Coolidge, became president. Stepping into the ‘swamp’ of the day the tireless steadfast man began to make the changes that would clean up the corruption in Washington D. C.

The story of Coolidge parallels that of our present time. But today we need a New York Scrapper and not the quiet demeanor of a Coolidge. I again point you to the references where a fantastic article from The Federalist set me on the journey that is this 100 Year Cycle. And why are we in this cycle?

“No people can look forward who do not look backward. The strongest guarantee of the future is the past.”

When Coolidge ran for president in 1924 it was agains a ‘Progressive’ candidate. See, the enemy has been at our door steps before but not a blatant as in the past. Coolidge was the man for that time and the straightforward – take it to the mat – Donald Trump is what will shake the roots of socialism and communism in our bureaucracies and political system.

I hope you take the time to read the background on Calvin Coolidge. He had a love for the Constitution and Americanism that is now being emphasized by the President Trump.

Oh, what I like about Coolidge is that like me in our present age, he puts a lot of emphasis on The First Great Awakening and Christianity as the undergirding principles and force for the foundation of this nation and our form of a Constitutional Republic.

Referencing the slaughter on the green, which became known as the The Boston Massacre. How different the response by Sam Adams compared to that of BLM, Antifa and the rest of the Marxists movements today.

As the lives of five of his Majesty’s subjects were unfairly lost on the evening of the 5th of March last, it follows that some persons must have been in fault:

The unhappy sufferers, for ought that has ever appeared, were in the peace of God and the King; let their memories then, so far at least as respects this matter, remain unreproach’d. It appeared by the evidence in court, that all the prisoners were present in king street; that they all discharg’d their musquets but one, and his flush’d in the pan; and that the deceas’d were all kill’d by musquet balls. Six of the prisoners were acquitted by the jury, and two were found guilty of manslaughter. In ordinary cases, the publick ought to rest satisfied, with the verdict of a jury; a method of trial, which an Englishman glories in as his greatest security: It is a method peculiar to the English; and as a great writer observes, has been a probable means of their having supported their liberties thro’ so many ages past: Among the most substantial advantages arising from trials by juries, there is this incidental one, in this province especially; that by our laws, no man being oblig’d to serve as a juryman more than once in three years, it falls upon the freemen as it were by rotation; by this means, the people in general are in their turns called to that important trust; by attending in courts of law and justice, it is to be presum’d that their minds are there impress’d with a sense of justice; and that they gain that general idea of right or law, which it is necessary that all men in a free country should have. “It is an admirable institution, by which every citizen may be plac’d in a situation, that enables him to contribute to the great end of society, the distributing justice; and it every where diffuses a spirit of true patriotism, which is zealously employed for the publick welfare.” I am not about to arraign the late jurors before the bar of the publick: They are accountable to God and their own consciences, and in their day of trial, may God send them good deliverance. But in times when politicks run high, we find by the experience of past ages, it is difficult to ascertain the truth even in a court of law: At such times, witnesses will appear to contradict each other in the most essential points of fact; and a cool conscientious spectator is apt to shudder for fear of perjury: If the jurors are strangers to the characters of the several witnesses, it may be too late for them to make the enquiry, when they are upon their seats: The credibility of a witness perhaps cannot be impeac’d in court, unless he has been convicted of perjury: But an immoral man, for instance one who will commonly prophane the name of his maker, certainly cannot be esteemed of equal credit by a jury, with one who fears to take that sacred name in vain: It is impossible he should in the mind of any man: Therefore, when witnesses substantially differ in their relation of the same facts, unless the jury are acquainted with their different characters, they must be left to meer chance to determine which to believe; the consequence of which, may be fatal to the life of the prisoner, or to the justice of the cause, or perhaps both. It was for this reason, that I was concern’d, when the council for the crown objected the notoriety of the immoral character of a witness, that he was stopped by one of the council on the other side. In a court of justice, it is beneath any character to aim at victory and triumph: Truth, and truth alone is to be sought after.

The full article and the description of a True Patriot Link is here.

1. Federalist Article: How Calvin Coolidge Defended The Constitution Amid Riots, Pandemic, And War

2. A Biographical Sketch of Calvin Coolidge