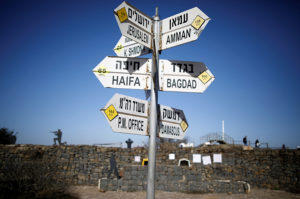 I am delighted to have Adam Retych back on the program Talking Israel. Many of you will remember Adam from last year as he brought us fantastic insights into SEL.

Adam is a friend who is in his second year of college and getting ready to move into additional challenges as he will be taking on his major studies throughout the summer and into the next couple of years.

I know, you are still scratching your head… SEL??? Remember the Ohio Board of Education plans regarding Social Emotional Learning. Go back and review what Adam enlightened us about regard this topic in these two programs:

Adam Retych spent about ten days in Israel last summer. He did it as a boots on the ground investigative student. He had a number of questions regarding the facts about modern Israel. Based on what Adam learned, He is Talking Israel; modern Israel as he sought the answers to his questions as well as developed more.

We engage in a conversation that focusses on the Palestinian issue as Adam was able to consider key facets from the historical to the present. I appreciate his insights and fresh thoughts on this issue that will help all listeners get a boots on the ground perspective.

As we are Talking Israel, the intent is to give this first hand perspective to conservatives and Christians that do not have the same experiences as Adam. Hopefully this is the beginning of more questions for all interested in this topic.

A RECORD OF “THANKS.”

The papers of Samuel Adams’ day contained many political satires, directed at different parties, according to the political bias of the papers, usually personal, often disrespectful, even irreverent, sometimes witty, but generally finding their point in local fitness and the relish which personality always gives to newspaper squibs. In Rivington’s Royal “Gazette, “ on the occasion of a day of general thanksgiving being appointed by the Massachusetts Congress, appeared the following:

(“A Grace for the Port of Boston.)

“Thanks to Hancock for thanksgiving:

Thanks to God for our good living:

Thanks to Gage for hindering evil:

and for source of discord civil,

Thanks to Adams and the devil.”

NO FAITH IN THE KING.

Whatever may have been the private views of Mr. Adams with regard to the ultimate future and independence of the colonies, no one can read the letters and petitions to the government, framed and many of them penned by Samuel Adams, up to 1769, and fail to observe and admire the clearness and moderation with which the grievances are stated, as well as the firmness with which their rights are asserted.

Yet an incident related by Mrs. Hanna Wells, Mr. Adams/ daugher, shows how little faith he himself had in the mercy or justice of the king.

The young girl remarked, as she glanced over the petition to the king, “That paper will soon be touched by the royal hand.” Her father quickly replied, “It will, my dear, more likely be spurned by the royal foot.”

– the above from: Samuel Adams Great Americans of History, Pages 161 and 162