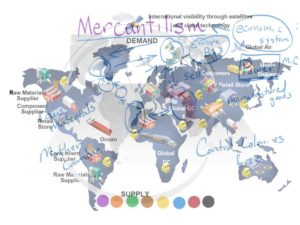 Davos and Davos 1776 are parallels in history. I often comment that there is ‘Nothing New Under the Sun.’ The location is different in that Switzerland was know as the bastion and root of the Reformation while now it is the bastion for the ‘World Economic Forum.’ Ha… and dispensationalists thought that Brussels was the ‘beast!’

Clarification, there is nothing wrong with working hard and smart to develop wealth. Yet, to assume that ones wealth allows them to be the leader and lord of all things is antithetical to Foundational Biblical and American principles.

Just to quote an interesting observation from 2017 (the article is in the references):

“(People) have witnessed the rise of the Davos class, a hyper-connected network of banking and tech billionaires, elected leaders who are awfully cosy with those interests (neoliberal policies), and Hollywood celebrities who make the whole thing seem unbearably glamorous,” Naomi Klein, an author and social activist said in an opinion piece for The Guardian newspaper just a day after Trump’s victory in November.

She claimed that neoliberalism has nothing to offer for the pain of growing debts and people’s feelings of powerlessness. “Neoliberalism unleashed the Davos class. People such as Hillary and Bill Clinton are the toast of the Davos party. In truth, they threw the party,” she later added in the piece.

What I am discussing in the program is that these elites are the same class that forced the American Revolution based on controlling trade, money, resources and manufacturing. Yes, it was the European mercantile class from 1660 through 1776. Oh, and just a side note, Adam Smith noted that the American Colonies would become a world leader if not more controlled.

Oh, check out the counter argument in an Op Ed from the NY Times that there is ‘No Party of Davos’ in the references.

A Question of Economics.

Davos 1776 as a Question of Economics is dated back to when economics became a so called science. Adam Smith, during the Scottish Enlightenment, documented what was the shadow of the mechanisms regarding the ‘Mercantile Era.’ Not withstanding that developing goods, producing raw materials for manufacturing, actual manufacturing and trade had been going on for more than a millennia. All things become quantified from the time of Adam Smith. This numerical gaming has a capacity to initiate concrete control mechanisms. And we don’t have time to go through what that means.

What I develop in this program is that we have missed the concept of Biblical Economics. I once started to write a book on this and during the research found an amazing set of writings by Dr. Gary North. No way I could ever come close to his historical and Biblical analysis and writings.

The bottom line in the Question of Economics comes to: Are your God given talents and gifting being used in all that you were created to accomplish or have you only the frame of reference developed by the non-Biblical ideas of Economics?

The most common use of the word ‘economy’ during the Founding era was that of a “careful management of available resources.”

On the death of his first wife it was written:

“To her husband she was as sincere a friend as she was a faithful wife. Her exact economy in all her relative capacities, her kindred on this side as well as on her own admire.

‘She ran her Christian race with remarkable steadiness, and finished triumph. She left two small children. God grand they may inherit her graces.”

“She was a woman of refinement and culture, full of sympathy and warm appreciation. With all her other accomplishments, she possessed a genuine New England genius for economy, making the best possible use of a slender income.”

– the above from: Samuel Adams Great Americans of History, Pages 25 and 32

“…I hope the same Spirit now prevails and that Measures are taking to collect & support an Army and to introduce (Economy & Discipline among officers of Rank as well as private Soldiers, so as by Gods Blessing to insure us a successful Campaign…” Here Economy follows the definition of the time where it contextually means ‘careful management of Available Resources.

“Our Merchants are complaining bitterly that Great Britain is ruining their Trade, and there is great Reason to complain; but I think much greater, to complain of too many of the Citizens thro’ the Common wealth who are imitating the Britons in every idle Amusement & expensive Foppery which it is in their Power to invent for the Destruction of a young Country. Can our People expect to indulge themselves in the unbounded Use of every unmeaning & fantastick Extravagance because they would follow the Lead of Europeans, & not spend all their Money? You would be surprizd to see the Equipage, the Furniture & expensive Living of too many, the Pride & Vanity of Dress which pervades thro every Class, confounding every Distinction between the Poor & the Rich and evincing the Want both of Example & Economy.”

INSTRUCTIONS OF THE TOWN OF BOSTON TO ITS REPRE SENTATIVES IN THE GENERAL COURT. SEPTEMBER,1765.

“ ….We further instruct you, to take particular Care, the the best economy may be used, in expending the publick money; and that no unaccustomd Grants may be made to those who serve the Government….” Writings of Samuel Adams Volume I Page 29

3. Pinkerton: ‘The New Class War’ Exposes the Oligarchs and Their Enablers

4. Washington Post Op-ed: ‘Give the Elites a Bigger Say in Choosing the President’

5. Is Davos As Bad As Critics Say? Global Leaders Weigh In

6. The ‘party of Davos’ wakes up to the new, new world order

7. No ‘Party of Davos’: Rejecting an Elitist Label