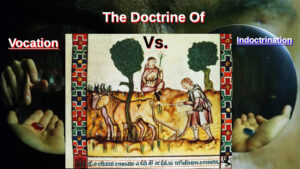 This week I’m bringing the Doctrine of Vocation to the table. Since the snow kept us from the meeting where I was to present on the Doctrine of The Lesser Magistrate, I wanted to drill down on one key aspect included in the concept of where do Lesser Magistrates come from. Believe it or not Mr. Ripley, the Doctrine of Vocation was taught and brought forward by Martin Luther. In our present age we have Vocation Vs. Indoctrination. There is so much indoctrination that has inculcated in our Citizenry that even the pulpits have swallowed the blue pill for over a century.

Consequently Vocation became a very profound Doctrine during the Reformation. Subsequently in the last 150 years, this is no longer taught, generally speaking, from the pulpits; never in the education system; nor in business and worse, nowhere in the family (except some Reformation minded churches). I personally attest to this since I did not address Vocation from a Biblical Reformation Doctrine when I was raising our children.

In other words, I missed the simple fact that Vocation is a Biblical Doctrine in part because the evangelical churches that I attended, until I really started studying the Reformation, always put the emphasis on missions and service in or at the church as the primary vocation for Christians. Regardless of denomination, the churches and education placed the high calling of people to be: get educated, go to work and have a better life then the previous generation.

With that in mind, when the body of Christ fully turned education over to the humanists and ungodly, all aspects of personal expression in developing the potentials of individuals set the war of Vocation Vs. Indoctrination. Now there seems to be a limited resurgence in Vocation as noted within the References below.

My intention in bringing this to you is in preparation for next week: What is ‘The Doctrine of the Lesser Magistrates’ and Who are they?

What is the Doctrine of Vocation? R. C. Sproul describes it like this:

One of the key doctrines taught by Luther in the sixteenth century was the priesthood of all believers. That is an often misunderstood concept because it sounds as if Luther was saying that, with the advent of Protestantism, the idea of an ordained clergy is no longer necessary.

Luther did not do away with an ordained clergy. He understood that there was a particular function established in the New Testament for what we would call full-time Christian ministry or pastoral ministry.

What he was saying by the priesthood of all believers is that every believer is called to participate in the establishing and building of the kingdom of God. And every believer, whatever work he’s engaged in—banker, lawyer, Indian chief, baker, or whatever it may be—his work should be done to the glory of God. He should be subjecting his talents and gifts to live coram Deo, before the face of God, under the authority of God, and to the glory of God. This means that we should be wrestling with the biblical principles that teach us how to use our gifts and talents in a way that is serviceable to God and to humanity.

In the medieval church, vocation was restricted to the clergy for the most part. But in the Reformation it was said, “No, the farmer has a vocation, the banker has a vocation,” and so on. God calls all of us to do different aspects of different parts in developing His kingdom.

To that end I am going >to elaborate on Vocation in relationship to those called to serve in Government and bureaucracies. This is a bit of a followup from last week. Ohio has a governor who is not only violating his oath of office but very well might be in the wrong Vocation. Worse of all, he is not only contributing to Indoctrination but foisting it upon the young of Ohio so he can satisfy the those who hold his purse strings.

I am not letting this go but I have not put up the short video on the CARES money that I discussed last week. Honestly, I have a lot of hours into the research on this and I don’t think that anyone really cares to know the Truth.

Undoubtedly, the depth of entanglements in CARES money should set your hair on fire and you should want to censure, fire, get rid of and expel and banish those who foisted this grand theft upon We The People. But everyone is sucking off the tits of the fat pig called the Federal government, all the way to you and me as individuals. Who is really wanting to be weaned off? When you tell me that and are ready to fight, then I will provide you with the ammunition.

With that said, the Governor’s and State Legislatures that will not reject this money and the coercion by the Federal Government contained in CARES and associated legislation, need to be held accountable for enslavement and instantiating socialism/communism upon the sovereign Citizens of the various States. Will you Act?

In respect and consideration of Rush Limbaugh’s passing and the Stalwartness of Patriotism of Limbaugh as well as President Trump regarding God, Family and the Republic… This letter from Sam Adams to his wife speaks much. (emphasis added by me.)

A few days ago Mr Brown, a publick Messenger carried a Letter from me to you, which I hope you will receive before this reaches you. I feel a Pleasure when I sit down to write to you and omit no opportunity. My Boston Friends tell me with great Solicitude that I have Enemies there. I thank them for their Concern for me, and tell them I knew it before. The Man who acts an honest Part in publick Life, must often counteract the Passions Inclinations or Humours of weak and wicked Men and this must create him Enemies. I am therefore not disappointed or mortified. I flatter my self that no virtuous Man who knows me will or can be my Enemy; because I think he can have no Suspicion of my Integrity. But they say my Enemies “are plotting against me.” Neither does this discompose me, for what else can I expect from such kind of Men. If they mean to make me uneasy they miss their Aim; for I am happy and it is not in their Power to disturb my Peace. They add, The Design is to get me recalled from this Service. I am in no Pain about such an Event; for I know there are many who can serve our Country here with greater Capacity (though none more honestly). The sooner therefore another is elected in my Room the better. I shall the sooner retire to the sweet Enjoyment of domestick Life. This, you can witness, I have often wishd for; and I trust that all gracious Providence has spared your precious Life through a dangerous Illness, to heighten the Pleasures of my Retirement. If my Enemies are governd by Malice or Envy, I could not wish them a severer Punishment than their own Feelings. But, my Dear, I thank God, I have many Friends. You know them. Remember me to them all as you have opportunity. I could say many more things to you, but I am called off. My Love to my Daughter & Sister Polly and the rest of our Family and Connections. Adieu. Your most affectionate,”

3. What is the doctrine of vocation? by R. C. Sproul

4. The Reformation of Vocation by D. G. Hart

5. A New Testament Professor’s Rediscovery of the Doctrine of Vocation by Robert Plumer, August 27, 2018

6. The Doctrine of Vocation How, God Hides Himself in Human Work by Gene Edward Veith

Two Ohio Groups to participate in:

Comments Off on 2-20-21 Vocation Vs. Indoctrination