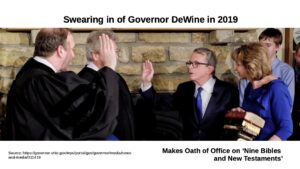 I began to write Gov. DeWine an open letter but it was turning into a book. Instead of writing something that I knew he would never read, I decided that I would make the open letter a program that anyone could republish as they would like.

The content of this Open Letter message to Gov. DeWine was to begin with the Executive Orders (EO’s) that he signed on inauguration day. As a sitting member of the mental health board at that time, I found two executive orders to be adding big government and a capitulation to the psychobable lobby. In my opinion, the positions and intent of these orders would add to loss of parental control of K-12 students and would, as it has proven to be true, implement programs into schools that parents may not be aware of which promote mental evaluations of all students. Remember, mental health boards count all students as a demographic, especially for funding purposes.

As I was looking back at Gov. DeWine’s site to find the EO’s, I was shocked to see the picture there of him taking the oath of office. Not that the intent of the new Governor was other than to show respect for the previous owners of the Bibles/New Testaments that his wife was holding but that this action of oath taking is not representative of putting the Truth principles into his exercising governance. Therefore, I believed that the best way to address this swearing in was to bring it into context of the Rev. John Webb Sermon, The Government of Christ, that I put up this past week. You ask why?

The simple answer is that Gov. DeWine Does Not Govern as one who swears on nine Bibles and New Testaments. When one reviews the Sermon of Rev. Webb and other Foundational Pastors, it is clear that either the Ohio Governor has no understanding of that which he swore to and on or that his church Pastor and leadership over the entirety of his life failed to inculcate the truth of Biblical governance into him.

With that, this program is dedicated to identifying for Gov. DeWine why he falls into the categories that Rev. Webb describes as despotic.

I am going to make this simple. The data as clearly shown by Dr. Frank and Team proves that Gov. DeWine is misleading at best and fully manipulative with fear at worse.

With that, I had to look beyond the data to all the CARES money coming in and how it is being distributed. Let me be clear: There is a really bad flu from China. Yet, the true data does not support the fear and destruction of lives, businesses and Liberty that has been and is being exercised in Ohio.

Now, in the references you will find the links that I’m mentioning in the program. Follow the money for yourself. I will do a short video of moving through the links next week.

In respect to calling the bureaucrats and elected to account for their deceptions and fear mongering – it is well worth re-quoting Mr. Adams with this from a letter to John Scollay, PHILADE Decr 30, 1780: (my emphasis in bold)

‘Our Government, I perceive, is organizd on the Basis of the new Constitution. I am affraid there is more Pomp & Parade than is consistent with those sober Republican Principles, upon which the Framers of it thought they had founded it. Why should this new AEra be introducd with Entertainments expensive & tending to dissipate the Minds of the People? Does it become us to lead the People to such publick Diversions as promote Superfluity of Dress & Ornament, when it is as much as they can bear to support the Expense of cloathing a naked Army? Will Vanity & Levity ever be the Stability of Government, either in States, in Cities, or what, let me hint to you is of the last Importance, in Families? Of what Kind are those Manners, by which, as we are truly informd in a late Speech, “not only the freedom but the very Existence of Republicks is greatly affected?” HOW fruitless is it, to recommend “the adapting the Laws in the most perfect Manner possible, to the Suppression of Idleness Dissipation & Extravagancy,” if such Recommendations are counteracted by the Example of Men of Religion, Influence & publick Station? I meant to consider this Subject in the View of the mere Citizen. But I have mentiond the sacred Word Religion. I confess, I am surprizd to hear, that some particular Persons have been so unguarded as to give their Countenance to such kind of Amusements. I wish Mr —— would recollect his former Ideas when his Friend Whitfield thunderd in the Pulpit against Assemblies & Balls. I think he has disclaimd Diversions, in some Instances, which to me have always appeard innocent. Has he changd his Opinions, or has the Tendency of things alterd? Do certain Manners tend to quench the Spirit of Religion at one time & are they harmless at another? Are Morals so vague as to be sanctified or dispens’d with by the Authority of different Men? He does not believe this. But I will not be severe, for I love my Friend. Religion out of the Question for the present. It was asked in the Reign of Charles the 2d of England, HOW shall we turn the Minds of the People from an Attention to their Liberties? The Answer was, by making them extravagant, luxurious, effeminate. Hutchinson advisd the Abridgment of what our People called English Liberties, by the same Means. We shall never subdue them, said Bernard, but by eradicating their Manners & the Principles of their Education. Will the judicious Citizens of Boston be now caught in the Snare, which their artful, insidious Enemies, a few years ago laid for them in vain? Shall we ruin ourselves by the very means, which they pointed out in their Confidential Letters, tho even they did not dare openly to avow them? Pownal, who was indeed a mere Fribble, venturd to have his Riots & Routs at his own house, to please a few Boys & Girls. Sober People were disgusted at it, & his privy Councellors never thought it prudent to venture so far as expensive Balls. Our Bradfords, Winslows & Winthrops would have revolted at the Idea of opening Scenes of Dissipation & Folly; knowing them to be inconsistent with their great Design, in transplanting themselves into what they called this “Outside of the World.” But I fear I shall say too much. I love the People of Boston. I once thought, that City would be the Christian Sparta. But Alas! Will men never be free! They will be free no longer than while they remain virtuous. Sidney tells us, there are times when People are not worth saving. Meaning, when they have lost their Virtue. I pray God, this may never be truly said of my beloved Town. Adieu.’

And just one more quote for this week from a letter to John Adams, BOSTON Octr 4th 1790:

‘…The Nation was then governed by Kings, Lords, and Commons, and its Libertys were lost by a strife among three Powers, soberly intended to check each other, and keep the scales even. But while we daily see the violence of the human passions controuling the Laws of Reason and religion, and stifling the very feelings of humanity; can we wonder, that in such tumults little or no regard is had to Political Checks and Ballances? And such tumults have always happened within as well as without doors. The best formed constitutions that have yet been contrived by the wit of Man have, and will come to an End—because “the Kingdoms of the Earth have not been governed by Reason.” The Pride of Kings, of Nobles, and leaders of the People who have all governed in their turns, have disadjusted the delicate frame, and thrown all into confusion. What then is to be done?—Let Divines (pastors), and Philosophers, Statesmen and Patriots unite their endeavours to renovate the Age, by impressing the Minds of Men with the importance of educating their little boys, and girls—of inculcating in the Minds of youth the fear, and Love of the Deity, and universal Phylanthropy; and in subordination to these great principles, the Love of their Country—of instructing them in the Art of self government, without which they never can act a wise part in the Government of Societys great, or small—in short of leading them in the Study, and Practice of the exalted Virtues of the Christian system, which will happily tend to subdue the turbulent passions of Men, and introduce that Golden Age beautifully described in figurative language; when the Wolf shall dwell with the Lamb, and the Leopard lie down with the Kid—the Cow, and the bear shall feed; their young ones shall lie down together, and the Lyon shall eat straw like the Ox—none shall then hurt, or destroy; for the Earth shall be full of the Knowledge of the Lord. When this Millenium shall commence, if there shall be any need of Civil Government, indulge me in the fancy that it will be in the republican form, or something better.’

5. Federal Pandemic Oversight – Track the Money –Where is the money being spent?

7. Ohio Auditor Office – Coronavirus Relief Fund (CRF) – Where Does It Come From?

Facts and Trueing the Data on the ChicomFlu (Covid 19)