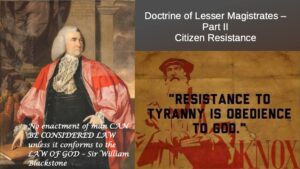 The Doctrine of Lesser Magistrates is like other many practical political theological principles that have been put in the closet of postmodernism (see references for definitions), especially in the pastoral mind. There are modern thought leaders in the pulpits that have clarity and identify the need for political action at every level within the context of Foundational truth. Yet, the great number of US Citizens have no idea of what the elected are supposed to do let alone act according to the principles of the Doctrine of the Lesser Magistrates.

This program is Part II in discussing the Lesser Magistrates. I was honored to present Part I on the Doctrine of the Lesser Magistrates at the Lake County Liberty Coalition meeting this past Wednesday. It was a fantastic group of people that want local and state governance to function according to core principles. During this time I presented the history and application of what this Doctrine is as well as how it can be applied in our present time. (see the references to get the presentation pdf.)

What to do if Lesser Magistrates won’t Act?

The question that is addressed in this weeks program is the continuation of Part I: What if the Lesser Magistrate won’t support or act according to Foundational Principles? What Can I do? What should I do?

Since the Pulpits do not give the historical guidance from the historical Pastors of the Reformation or more importantly from the time of the American Revolution, the Citizenry has no capacity to understand their individual proper role in resisting tyranny. With that in mind, I am appreciative of the work of Sarah Morgan Smith writing in the George Fox University Faculty Publications – Department of History, Politics, and International Studies. Thankfully Sarah did all the hard work and I get to bring you a discussion of “Whose Rebellion? Reformed Resistance Theory in America: Part II”

If the Lesser Magistrates can’t or won’t act, Then the Citizenry can. But…. With caveats that clearly defined and with which the Founders of America followed.

This is the chart that was discussed in Part I on Wednesday night. At the National Federal Level, we are in DEVCON 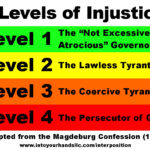 4 base on the Thursday House Passage of ‘the Equality Act.’ This is worse than the attacks on ‘religious Liberty’ that was occurring during the Founding Era. This as well as other immoral executive orders and legislation would not be tolerated by the Founders of this Republic.

Sadly, there are many denominations and major pastors/theologians that are capitulating to the evil of those in elected offices and bureaucracies. Hence, the Citizenry is duped and stupefied to comply with unrighteous mandates and law that is contrary to God’s Law.

From Sam Adam speech regarding the reasons and truth of the Declaration of Independence which is very important for our time in history NOW! This destroys and counters the postmodernism that American Citizens, education, politicians, bureaucrats and worse – pastors have been deceived into believing. NO! We must echo and Act according to what Sam delivers for us and our Liberties! (download the complete speech here American-Independence-8-1-1776-a)

‘Truth loves an appeal to the commonsense of mankind. Your unperverted understandings can best determine on subjects of a practical nature. The positions and plans which are said to be above the comprehension of the multitude may be always suspected to be visionary and fruitless. He who made all men hath made the truths necessary to human happiness obvious to all.

Our forefathers threw off the yoke of popery in religion: for you is reserved the honor of levelling the popery of politics. They opened the Bible to all, and maintained the capacity of every man to judge for himself in religion. Are we sufficient for the comprehension of the sublimest spiritual truths, and unequal to material and temporal ones? Heaven hath trusted us with the management of things for eternity, and man denies us ability to judge of the present, or to know from our feelings the experience that will make us happy. “You can discern,” say they, “objects distant and remote, but cannot perceive those within your grasp. Let us have the distribution of present goods, and cut out and manage as you please the interests of futurity.” This day, I trust the reign of political protestantism will commence. We have explored the temple of royalty, and found that the idol we have bowed down to, has eyes which see not, ears that hear not our prayers, and a heart like the nether millstone. We have this day restored the Sovereign, to whom alone men ought to be obedient. He reigns in Heaven, and with a propitious eye beholds his subjects assuming that freedom of thought, and dignity of self-direction which He bestowed on them. From the rising to the setting sun, may His kingdom come. Having been a slave to the influence of opinions early acquired, and distinctions generally received, I am ever inclined not to despise but pity those who are yet in darkness. But to the eye of reason what can be more clear, than that all men have an equal right to happiness? Nature made no other distinction than that of higher or lower degrees of power of mind and body. But what mysterious distribution of character has the craft of statesmen, more fatal than priestcraft, introduced? According to their doctrine, the offspring of perhaps the lewd embraces of a successful invader, shall, from generation to generation, arrogate the right of lavishing on their pleasures a proportion of the fruits of the earth, more than sufficient to supply the wants of thousands of their fellow-creatures: claim authority to manage them like beasts of burden, and without superior industry, capacity, or virtue, nay, though disgraceful to humanity by their ignorance, intemperance, and brutality, shall be deemed best calculated to frame laws, and to consult for the welfare of society. Were the talents and virtues, which Heaven has bestowed on men, given merely to make then more obedient drudges, to be sacrificed to the follies and ambition of a few? Or, were not the noble gifts so equally dispensed with a divine purpose and law, that they should as nearly as possible be equally exerted, and the blessings of Providence be equally enjoyed by all? Away then, with those absurd systems, which, to gratify the pride of a few, debase the greatest part of our species below the order of men. What an affront to the King of the universe, to maintain that the happiness of a monster, sunk in debauchery and spreading desolation and murder among men, of a Caligula, a Nero, or a Charles, is more precious in his sight than that of millions of his suppliant creatures, who do justice, love mercy, and walk humbly with their God! No! In the judgment of Heaven there is no other superiority among men, than a superiority in wisdom and virtue. And can we have a safer model in forming ours? The Deity then has not given any order or family of men authority over others, and if any me have given it, they only could give it for themselves….’

Ohio Groups to participate in: