The original Post: 6-9-18 The Evangelical Conundrum Explained by Samuel Adams 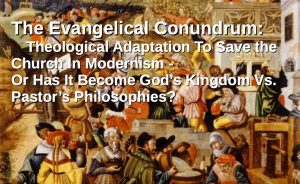 More then ever, Christianity and Evangelicals in particular have little unanimity in Biblical understanding of our present condition regarding sin, politics, governance, human creation and how to respond to the theological disconnect in each of those topics alone.

In looking at how to present this program for your interest, I came across a Masters Thesis that looks at the Puritan’s perspective of end times. This statement is pertinent to my discussion on the Evangelical Conundrum (my emphasis added):

‘The Puritans came to the New World with the intent of completing the Reformation of the Christian Church, and of erecting the foundation upon which Christ would establish his millennial Kingdom on earth. Eschatology was thus never separated from the desire for church reform; it continually associated the Kingdom with the Church. But as New England society gradually moved in the direction of becoming a secular community and a commercial commonwealth, theologians somehow attempted to update religion, to make the church relevant not just to an elect body of saints but to the larger populace. Puritanism changed partly out of the necessity to preserve the churches, since it found that the rigid standards of reformation in 1630 were far too rigid for the society of 1700. But it changed also because theologians earnestly desired to accommodate religion to the Age of Enlightenment. Eschatology survived this transition, even though it was far different in the eighteenth century than it was at the beginning of the seventeenth. By the time of Jonathan Edwards, eschatology took a place among the progressive ideas of the Enlightenment, foretelling of a millennium gradually occurring through the normal course of history, and of a future embodying endless progress for the world.’ – Eamon, William Charles, “Kingdom and church in New England; Puritan eschatology from John Cotton to Jonathan Edwards” (1970). Graduate Student Theses, Dissertations, & Professional Papers. 5529. https://scholarworks.umt.edu/etd/5529

What struck me most in this quote is how the core fundamentals are ‘changed out of necessity to preserve the churches.’ Worse, and we are seeing it now with Critical Race theory and other secular philosophies is likened to theologians earnestly desired to accommodate religion to the Age of Enlightenment.’ So now we are in the age of techno-oligarchs and socialist theology. Yes, the modern theologians are accommodating likewise to save religion. Hmm.

I thought what I originally wrote in 2018 was still spot on as a commentary for today.

Evangelicals are confused as they deal with the difficult question regarding participation in governance especially when looking at the national government. This conundrum is not new! Sam Adams had to deal with it during debates in the 1776 Continental Congress and in the media of the day.

Imagine that – Contrarian positions appearing in the media and of a religious/denominational nature. Sam Adams responds to the Quakers who want to submit to the King. They held a ‘convention’ from which came a declaration abhorring Paine’s “Common Sense” and any such writings let alone separating from Great Britain. The Quakers argued a position of Divine Providence that attempted to convince readers that it was ‘against God’ that the Colonial uprising was taking a position in the idea of separation from Great Britain.

Samuel Adams gave a greater and stronger public media response that discussed Gods actions in history with Biblical soundness. Quoting from Volume II of the Life of Samuel Adams, “Mr. Adams accepted this religious, providential view of the question, and replied soon after, showing by historical examples, that as the rise and fall of empires and rulers was within the special prerogative of God, the present revolution was none the less the result of omnipotent design, and that in God’s providence, the time for the establishment of an independent commonwealth in the West had arrived. Men were but the instruments in his hands for such purposes. Divine will had evidently selected the present moment for the separation of America from Great Britain. This essay, like the Quakers’ address, was directed to the ” People in General.”

There is much more in this letter that I have copied to the references below since you will otherwise never no look for the full source to read. The relevance of Sam’s writing HITs hard for this very present moment!

Now some more new thoughts for this week. I keep bringing up the Doctrine of the Lesser Magistrate because we have so many Tory Evangelicals that act like the Quakers when it comes to all those shifts in acceptable philosophies covering for doctrine. Yet as I study the Scriptures, it is evident that we are to engage and lead in all of society with grace and piety as well as confidence and exacting justice that Jesus did when he entered Jerusalem and then cleansed the Temple.

Sam Adams, as an elected Lesser Magistrate, is one of the best examples of exercising this Reformation principle that is good for the Church and good for society.

The full article is below the References.. This is most pertinent to this day at all levels of governance and bureaucracies.

‘It must be allowed by every one who has the least knowledge of the English nation, that there is no degree of vice, folly, or corruption now wanting to fill up any measure of iniquity necessary for the downfall of a state. From the King on the throne to the meanest freeman in the nation, all is corrupt. The Crown, far from regarding its duty in the political world, only uses the public money to bribe the public officer. The legislator grants the money of the people with a degree of cheerfulness proportioned to the prospect he has of handling it through fingers of corruption. The freeman sells the importance he possesses in the state for the good of himself and his neighbors for a bellyful of porter, and gives his vote to the man who, by the largess he offers, shows he is the most unfit person in the nation to be possessed of the trust. Thus men guilty of the worst of vices possess the places of power and trust, which ought to be filled by none but those of the greatest integrity and virtue. And the consequence is, that the nation is ruled with a rod of iron, and there is no part of the empire free from oppression. Her princes are corrupt, her nobles degenerate, and the representatives of the people are bought and sold. The government moves on the springs of iniquity, and the measure of their conduct is directed by their power of execution, and not by justice or equity; so that it is perhaps impossible in all history to produce a more complete state of corruption in government. Omnia sunt venalia Romce, is nothing to this, for bribery is descended to the lowest dregs of the nation, and nothing is free from the touch of its pollution. The omnipotence of the Almighty is arrogated by men who rule with the tyranny of the Devil. This is Great Britain’s true but melancholy condition. The eye of partial affection may cast a veil over it ; but ingenuity and candor will acknowledge the facts. Tell me, then, ye devotees of religion, the intentions of God to a nation like this, and point out the advantages of being reconciled to such a government.’

The video of the program is at the SamuelAdamsReturns YouTube chanel

Ones I can’t let go from in front of you:

Adding one for all to get: Doctrine of the Lesser Magistrate

If you are a Christian then this is a must for these present times: Tactics of Christian Resistance by Dr. Gary North

From the Pulpits in the Foundation: Ellis Sandoz, Political Sermons of the American Founding Era: 1730-1805, 2 volumes

Because our theology is wacko:

“Unholy Alliance: The History of the National Council of Churches” free pdf. by C. Gregg Singer

—— The full quote from Sam is at the Archives site- SamuelAdamsReturns.net